In a world of marquees and marketing, Billy Slater was the real thing

In a universe of marquee signings and marketing, Billy Slater was the real thing.

As a fledgling expansion side in a sceptical city, Slater was the player newcomers could gravitate towards when they watched the Melbourne Storm.

He was small, fast, unpredictable and so often the game breaker or even the game winner. Whether you were a diehard Storm fan or new to rugby league, Slater gave you a touching point.

It’s so rare to find an athlete whose reach extends beyond their own sport but ask almost anyone in Melbourne and they will know Slater and know that he plays for the Storm.

In front of our eyes he changed the way the fullback position was played and did so despite only coming into the role once he joined the NRL club.

To Victorians, we didn’t know any better – didn't all fullbacks attack the line like that?

But our naivety didn’t take away the joy that could be found from watching Billy the Kid run at the line.

They would send multiple defenders at him, pummel him to the ground and do everything inside or outside the rules to keep him down but he always bounced back up and every now and then would break the line. 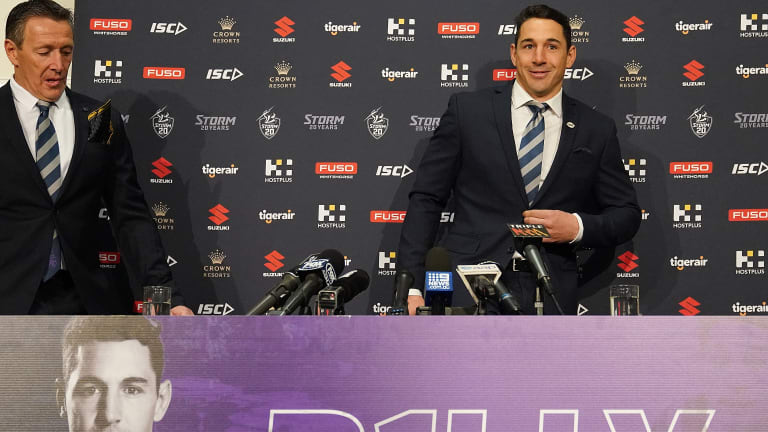 He did it for the Storm, for the Maroons and for the Kangaroos and there wasn’t a big rugby league stage that he didn’t make his own from Olympic Park to AAMI Park, from NRL grand finals to the 2013 World Cup final win at Old Trafford.

This season it has been clear Slater was smelling the roses. He still worked as hard as ever and still rates among the best in the game but from afar it seems he is taking in the moment a little more, savouring the NRL experience for the long retirement to come.

Storm chief executive Dave Donaghy said Slater was the definition of what it means to be a Melbourne Storm player while coach Craig Bellamy praised his consistency and, selfishly, admitted he wanted him to keep playing.

Whatever Slater did on the field, he was always approachable and friendly off the park and there would be few NRL fans who haven’t got a photo or autograph or unforgettable moment with Slater.

Every season the Storm's youngest players have their "arrived" moment when it dawns on them they are playing alongside Slater and Cameron Smith. The duo have happily worn that adulation while still setting the standard for their teammates.

Slater has also relished recent seasons as his primary school-aged children Tyla Rose and Jake have become a more visible part of his career.

The kids of Slater and of captain Smith are regulars as ball kids during Storm games. Of all the achievements, Slater said he would never forget a tiny moment during last year’s NRL grand final win.

“I feel extremely lucky to have shared this part of my life with my children Tyla and Jake,” Slater said. 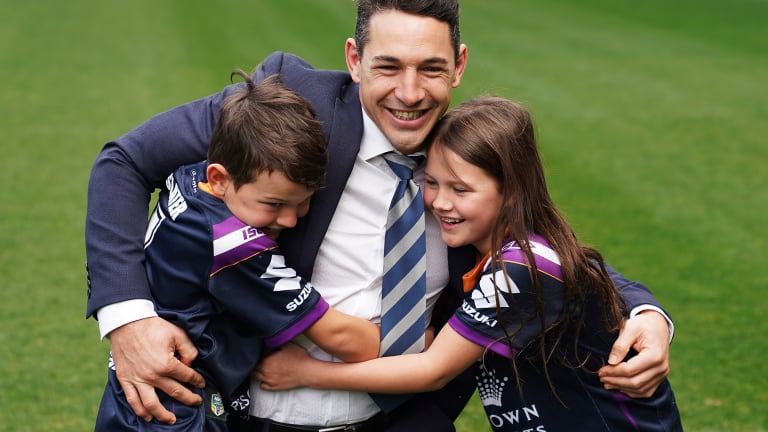 “To be in the middle of a grand final and have your son and your daughter run past you and give you a high five while delivering the kicking tee – that’s a special moment that I will remember forever.”

Rugby league will always be a sport which is attracted to the burly forwards and the powerful outside backs but Slater has become a figurehead for the little man and a reminder that willpower can still overcome horsepower.

Slater said he would have never had the success he has enjoyed without being taught to work hard by Bellamy and pushed to constantly improve by playing alongside Smith and star halfback Cooper Cronk.

Bellamy has long praised Slater for his work ethic and the ability to teach himself how to be an elite fullback.

But Bellamy believes Slater’s impact on the game, especially in Victoria, could last well beyond his playing career.

"It is a sad day in one way, but having said that, we should be celebrating what should be an unbelievable career,” Bellamy said. 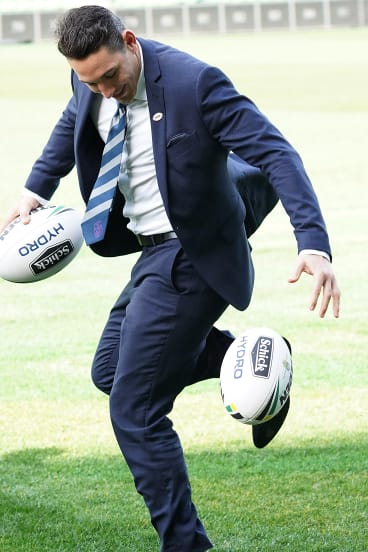 Billy Slater has enjoyed a stellar career with the Storm.

"For 16 year he's been in Melbourne. There wouldn't be that many kids playing rugby league in Victoria unless Billy Slater was playing for the Storm – what he's done through sheer hard work and time put in, he's turned into a smart player.

"He didn't just rely on god-given talents, he made himself better through hard work.”