World Series Preview: A Clash of Coasts and Contrasts

ARLINGTON, Texas — The shortest and strangest season in Major League Baseball history will finish with a clash of coasts and contrasts. The Los Angeles Dodgers and the Tampa Bay Rays — big spenders and bargain hunters — will crown one region with an unofficial title no one saw coming: inter-sports champion of the pandemic era.

The 116th World Series, to be played at Globe Life Field here starting Tuesday, will be the third championship series for a big four North American sports league to be decided this fall. The Tampa Bay Lightning won the Stanley Cup on Sept. 30 and the Los Angeles Lakers took the N.B.A. finals 12 days later. Now, either Tampa Bay or Los Angeles will add another trophy.

For the baseball teams themselves, though, a championship would be a long time coming. The Dodgers have not won the World Series since 1988, a decade before the Rays started play as the American League’s most recent expansion franchise. They dropped their original name, the Devil Rays, before the 2008 season, when they reached their only World Series, a five-game loss to the Philadelphia Phillies.

The Dodgers have reigned over the National League West for eight consecutive seasons — they were baseball’s best team this year, at 43-17, three games better than the Rays — but have always fallen short in the end. They lost the World Series in 2017 and 2018 and return now after rallying to beat the Atlanta Braves in the N.L. Championship Series after losing three of the first four games.

“Up to the point where we went down 3-1 in this series, we hadn’t really gone through any adversity at all during this season. So that was the one thing: It was time to get it done.” 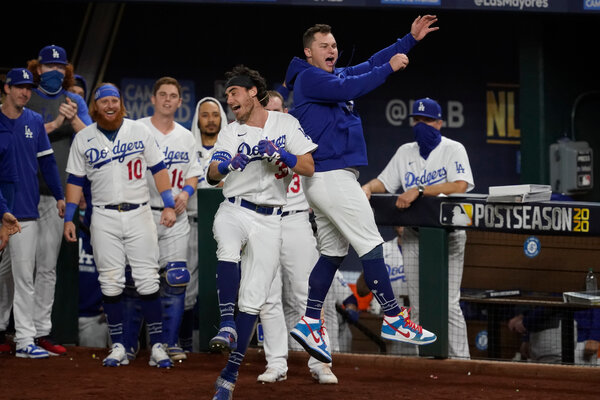 Did they ever. The Dodgers had faced a three games to one deficit seven times in their postseason history but had never managed to force a Game 7. This time, they won the pennant with a modern twist on a well-worn formula: pitching, defense and timely home runs.

They smacked three homers in Game 5, including two by Corey Seager, the series’ most valuable player, and a go-ahead three-run shot by catcher Will Smith. Seager and Justin Turner went deep in the first inning of Game 6, giving starter Walker Buehler and the bullpen all the run support they needed.

In Game 7, the Dodgers did a bit of everything: a home run-robbing catch in right field by Mookie Betts, a critical double play keyed by the whirling Turner at third, homers by Hernandez and Cody Bellinger, and six no-hit innings from relievers Blake Treinen, Brusdar Graterol and Julio Urias to finish the game.

“All season we’ve been controlling games and controlling series, but it seems like we were getting handled a little bit early on,” Betts said. “We were able to get ahold of everything, get ahold of ourselves and start to fight back. It just shows the type of group we have. We’re never going to give up.”

The Rays followed their own distinctive trail to the World Series with a best-of-seven path never taken before: win, win, win, loss, loss, loss, win. The Houston Astros were trying to join the 2004 Boston Red Sox as the only team to recover from a 0-3 deficit, but in the end the Rays made history of their own by ending a free fall.

To do so, they used the veteran moxie of starter Charlie Morton — who also closed out the Dodgers for Houston in the 2017 World Series — and the daily magic of outfielder Randy Arozarena. Morton worked five and two-third steely innings in Game 7, and a first-inning homer by Arozarena — his seventh home run of the postseason, a rookie record — gave the Rays a lead they never lost.

“Randy Arozarena, I don’t have any words to describe what he’s done, what he’s meant to us this postseason,” Rays Manager Kevin Cash said. “But for him to have a bat in his hand with an opportunity for a big home run really settled a lot of people in the dugout. It certainly did me.”

Arozarena, the A.L.C.S. most valuable player, hit .321 in the series while the rest of the Rays hit .183. Like the Dodgers, they have made their home runs count, scoring 71.9 percent of their postseason runs on homers (41 of 57), up from 41.5 percent during the 60-game regular season.

The power surge has made up for the Rays’ lack of contact: After leading the majors in strikeouts in the regular season, they whiffed 81 times in seven games against Houston. The last team with so many strikeouts in a postseason series was the 2018 Dodgers, who beat Milwaukee in a seven-game N.L.C.S. despite fanning 82 times.

That Brewers pitching staff relied mostly on an ever-shifting array of arms to keep the Dodgers off balance, a strategy Tampa Bay has also embraced. While the Rays have three solid starters — the right-handers Tyler Glasnow and Morton and the left-hander Blake Snell — they rarely let them face hitters three times in a game, turning quickly to a bullpen filled mostly with young, hard throwers firing from a variety of angles.

Only die-hards will recognize many of the names on the back of the Rays’ jerseys. But they identify and cultivate low-cost players with specific skills — the ability to crush certain types of pitchers, perhaps, or to excel at various spots on defense — and use them in just the right spots.

“We’re not a team that’s built with superstar after superstar,” Cash said. “We’re a team that maximizes opportunities and tries to get matchups to help us win games.”

“They’ve got the same amount of men,” Astros Manager Dusty Baker said during the A.L.C.S., “but it seems like they’ve got more men than you because they’ve got a lot of interchangeable parts and they’re used to using them.”

The Dodgers were similar the last time they reached the World Series, which should be no surprise. Their president of baseball operations, Andrew Friedman, built the Rays before leaving for Los Angeles after the 2014 season. Friedman applied many of the same principles there as he did in Tampa Bay, and it showed in the roster.

In the 2018 World Series, the Dodgers relied so heavily on matchups that Bellinger — who was rookie of the year the previous season and M.V.P. the next — started only two of five games against the Red Sox. In the Game 5 clincher that year, which included a homer by Betts for Boston, Hernandez hit third for the Dodgers after not even starting the previous two games.

Now the Dodgers have a much more settled lineup, with Betts, Seager, Bellinger, Turner, Max Muncy, A.J. Pollock and Smith all in the order for 10 of the 11 postseason games. The Dodgers did not exactly plan that, Roberts said, but responded to the players’ performance.

Betts, 28, has not homered yet this postseason, but he is hitting .311 with a .407 on-base percentage and flashing his usual standout defense. The Red Sox traded him in February rather than risk losing him in free agency, but the Dodgers made sure Betts never reached the open market, signing him in July to a 12-year, $365 million contract extension through 2032.

“I love the coaching staff, the players, the front office — everything about the Dodgers is winning,” Betts said. “That’s in my DNA, so that’s why I chose to stay here.”

The Rays do not compete for expensive veterans like Betts. Their prorated payroll this season was just $28.2 million, higher than only Pittsburgh and Baltimore, according to Spotrac, which tracks teams’ financial data. The Dodgers ranked second at $107.9 million, trailing only the Yankees.

Both teams value roster depth, but shop in different circles to get it. The Dodgers had 16 players who were scheduled to earn at least $4 million this season before the pandemic. The Rays had five: Morton, Snell, catcher Mike Zunino, outfielder Yoshi Tsutsugo and center fielder Kevin Kiermaier, whose eight years with Tampa Bay make him the team’s longest-tenured player.

“It doesn’t bother me one bit that we’re not big spenders,” Kiermaier said. “I enjoy it, because I was a 31st-round pick back in 2010 and I always thought I was a low-key, under-the-radar type of player coming up. I didn’t think enough people knew about me, but I knew I could do special things and I finally got my opportunity.

“Same with the Rays. We’re a small-market team, not the most popular team out there. But if you do all the little things right, consistently, great things can happen.”

They have happened all season for the Dodgers and the Rays, who will soon decide which land of beaches and palm trees — Southern California or the Florida Suncoast — will celebrate another title from afar.