D.J. LeMahieu and Luke Voit, who batted 1-2 in the lineup, jolted the rookie Chris Paddack with home runs in the first inning, James Paxton pitched four hitless innings in his return from the injured list and the Yankees beat the San Diego Padres, 7-0, Wednesday afternoon.

San Diego did not get a hit until the sixth when Wil Myers’s blooper bounced out of LeMahieu’s glove as he drifted out from second base.

Paddack ran to the mound for this start, already a sensation around the majors with his 1.93 earned run average. (It is now 2.40.) But the Yankees quickly showed the 23-year-old why so many visiting pitchers detest Yankee Stadium — and he wasn’t even victimized by the short porch in right field.

LeMahieu led off the bottom of the first inning with a home run on an 0-2 pitch and Voit followed with an even longer drive to left. It was the 10th time in franchise history the Yankees began a game with back-to-back homers. The previous time was last July 7 at Toronto when Brett Gardner and Aaron Judge connected off the current Yankees pitcher J.A. Happ. 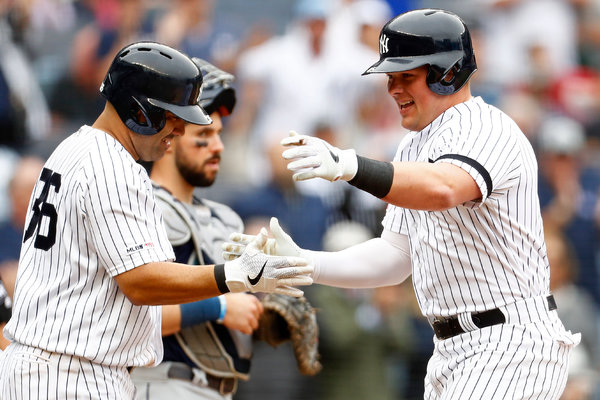 Paddack slapped his right hand into his glove when he reached the dugout. The Yankees kept making noise, too, when Urshela hit a solo shot in the second.

At that point, Paddack (4-3) had allowed three home runs on only 23 pitches. Scratched from his previous start because of a stiff neck, he was pulled after five innings trailing, 4-0.

Paxton, meanwhile, was in complete control. Out for nearly a month because of inflammation in his left knee, he showed no ill effects while striking out seven and walking two in throwing 66 pitches.

This is Paxton’s first season with New York, and he previously mentioned he was having a little trouble with the Yankee Stadium mound. Manager Aaron Boone said groundskeepers were working on a “fairly subtle” change to the sticky clay on the landing slope when Paxton pitches, hoping to soften the surface to ease the twist and torque on the lefty’s knee.

Voit hit a sinking liner that got past the charging center fielder Manuel Margot in the seventh, and Torres homered one batter later off Adam Warren.

The Yankees hope the left-handed pitcher C.C. Sabathia (right knee inflammation) can come off the injured list to start Sunday against the Red Sox. … Catcher Gary Sanchez and outfielder Aaron Hicks got a regular day of rest. … J.A. Happ (4-3, 5.09) is expected to face Boston’s Chris Sale on Thursday night as the Yankees begin a four-game series at home. Happ is 8-4 against the Red Sox, and pitched into the seventh inning against them in mid-April.