Yankees Say D.J. LeMahieu Is Worth Waiting For

The day before, Aaron Boone, the team’s manager, had said, “Hopefully at the end of all this, D.J. is a Yankee for a long time.”

LeMahieu, a second baseman who could fill in around the diamond, was the Yankees’ best all-around player over the past two seasons. In 2019, he hit .327 with 26 home runs and 102 runs batted in, finishing fourth in voting for American League most valuable player. In this year’s truncated 60-game season, he won his second batting title, leading the major leagues with a .364 average, and finished third in the A.L. M.V.P. voting.

The Yankees surprised many when, facing a surplus of infielders before the 2019 season, they signed LeMahieu as a free agent to a two-year, $24 million contract, which seems like a bargain in hindsight. LeMahieu, 32, has become an indispensable Yankee, and the team’s off-season plans center on him.

Speaking on a video conference call, Cashman said the Yankees had done their homework on alternative options in the free-agent and trade markets. “But anything that’s come off the board before today came off the board because I’m willing to wait to hopefully find a way to navigate a negotiation successfully with D.J. LeMahieu,” he said.

The Yankees and LeMahieu have repeatedly said they want to stay together. But in a slow off-season so far and a negotiation gap between the LeMahieu and the Yankees, the reunion has yet to happen. Despite his age, LeMahieu could be in line for a lucrative contract of at least four years.

“He’s a special player,” Cashman said. “He’s just done everything right. We were fortunate to have him for two years. We’d like to have him for longer, and it just remains to be seen if it’s going to work out that way or not.” 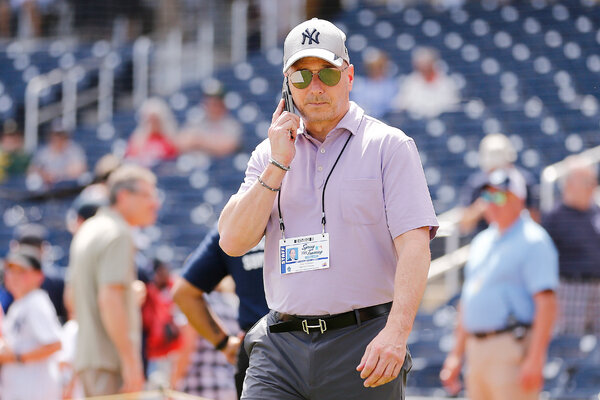 How much the Yankees — after a season in which the owner Hal Steinbrenner claimed his team sustained the most significant financial losses of any M.L.B. team in pandemic-affected 2020 — can spend on LeMahieu and other roster upgrades also remains to be seen.

Cashman declined to elaborate on his off-season budget or say whether he had been told to get under the 2021 luxury tax threshold of $210 million. He did say, though, that he felt “confident that we will again have the highest payroll, regardless.” (The players’ union has expressed skepticism about a claim by the M.L.B. commissioner, Rob Manfred, that the league’s 30 clubs sustained about $3 billion in operating losses this year.)

Before the pandemic shut down sports in March, the Yankees had pushed past several luxury tax thresholds with the largest opening day payroll in the majors, at $265 million, according to Cot’s Baseball Contracts. About $75 million in 2020 salaries — for pitchers J.A. Happ, Masahiro Tanaka and James Paxton; outfielder Brett Gardner; and LeMahieu — have come off the books.

Cashman said he had been in touch with the agents for Tanaka and Gardner, two longtime Yankees he would like to see return. “We’ll see how things play out,” he said.

Cashman repeatedly said on Wednesday that, even without any winter additions, he believed the Yankees had “a very strong committed roster already.” But he said he would like to add to the pitching staff and still improve the team, which hasn’t won a World Series title since 2009.

Gerrit Cole is the only proven healthy arm in the starting rotation for the start of the 2021 season. Luis Severino, a former All-Star, is returning from Tommy John surgery. Jordan Montgomery and Deivi Garcia, a rookie, were inconsistent in 2020. Domingo German is returning from an 81-game suspension related to his violation of the league’s domestic violence policy.

In terms of the other weaknesses on the roster, Cashman said Gary Sanchez, who was among the worst hitters in baseball in 2020 and was benched during the playoffs, would be the “heir apparent” to the starting catcher’s job next season.

He said the Yankees also hoped for a bounceback year from shortstop Gleyber Torres, who reported for the interrupted season’s second “spring training” out of shape, was slowed by injuries and regressed in the field. Whether LeMahieu returns will also determine where Torres plays next season.

Despite the possibility that the start of the 2021 season could be delayed by the pandemic, Cashman and Boone said the Yankees were operating as if spring training would start as announced, in mid-February.