The team announced that three coaches and four support staff members had tested positive as breakthrough cases ahead of Wednesday’s win over Tampa Bay. 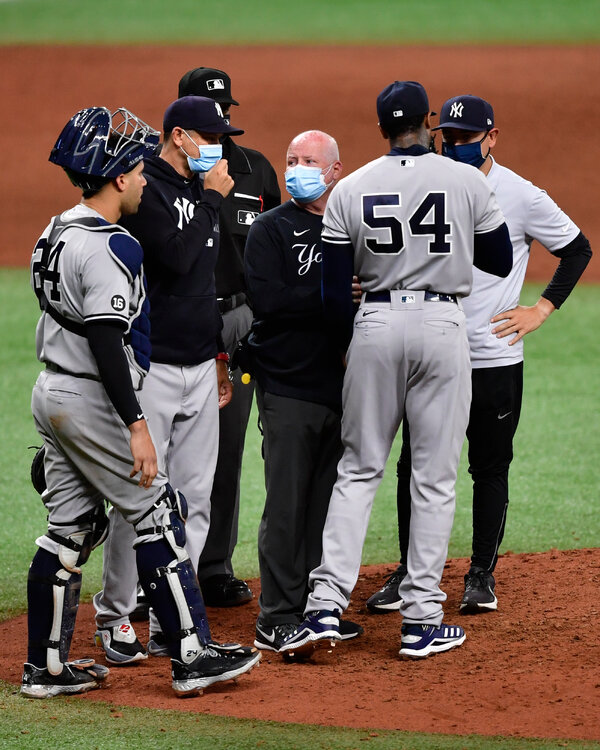 Three of the team’s coaches and four of its support staff members — all seven people are fully vaccinated, and thus considered breakthrough cases — have tested positive and are in quarantine. All but one of them are asymptomatic, Manager Aaron Boone said before the Yankees beat the Tampa Bay Rays, 1-0, on Wednesday in St. Petersburg, Fla.

The Yankees withheld shortstop Gleyber Torres from the starting lineup as his virus test results were pending and on the advice of the joint Major League Baseball and players’ union committee overseeing the health and safety protocols during the pandemic, Boone said.

Despite a growing number of cases, Wednesday’s game was never in jeopardy, Boone said, and the team was able to cruise to victory thanks to Gerrit Cole’s 12 strikeouts in eight scoreless innings and a seventh-inning sacrifice fly by Aaron Hicks. The Yankees had been enjoying relaxed health and safety protocols under rules negotiated by M.L.B. and the players’ union for reaching the threshold of having at least 85 percent of the club’s traveling party fully vaccinated.

The Yankees’ outbreak began with the third-base coach Phil Nevin on Sunday, when the team flew from New York to Florida to face the Rays. (Nevin, along with Boone, received the single-dose Johnson & Johnson vaccine during spring training in March.) The Yankees were tested extensively on Monday, when they had a scheduled day off, and again before Tuesday’s 3-1 win over the Rays.

M.L.B. conducted contact tracing, and no players were identified as close contacts. It also helped that the Yankees had largely been vaccinated, which blunted the impact and spread of the virus and changed how their situation was handled. Last season, M.L.B. postponed 45 games after outbreaks and cases, and the leagues had already done so seven times this season.

“I feel like, in a lot of ways, because we’re vaccinated, we’re kind of good and able to deal with this,” said Boone, who also expressed a bit of frustration because the virus testing was now so good it could detect even small traces of the virus.