BALTIMORE — Gary Sanchez stepped to the plate in the ninth inning on Sunday with a chance at history. Four-homer games are more rare than perfect games, and Sanchez had already gone long three times on Sunday as part of an offensive explosion by the wounded Yankees that produced 14 home runs against the Baltimore Orioles this weekend.

With the goal of the at-bat so clear, and with Hanser Alberto, an infielder, on the mound, Sanchez was under enormous pressure to go deep a fourth time.

“I tried to do what everyone was thinking about,” Sanchez said, smiling. “But some anxiety didn’t let me hit it.”

It did not matter that Sanchez flew out to left field. With seven home runs on Sunday, the Yankees still drubbed the Orioles, 15-3, to improve their record to 5-4 and cap a three-game sweep in which 26 of their 29 runs came via the long ball.

“That would’ve been a way to top off,” left fielder Clint Frazier, who clubbed two home runs himself, said of Sanchez. “But three homers isn’t too bad, either.”

Fault Sanchez, the Yankees’ primary catcher, for certain aspects of his game; he has made a handful of baserunning and defensive miscues a week and a half into the season. But do not fault him — or, for that matter, the Yankees’ depleted lineup — for a lack of power.

Serving as the designated hitter on Sunday, Sanchez produced career highs in home runs and runs batted in (six). The four hits and four R.B.I. by Frazier, who missed most of last season because of a concussion, were also career bests.

“I just feel healthier this year, and I feel better,” said Sanchez, who endured the worst all-around season of his career in 2018 along with off-season surgery on his nonthrowing shoulder. “And I hope to keep doing that.” 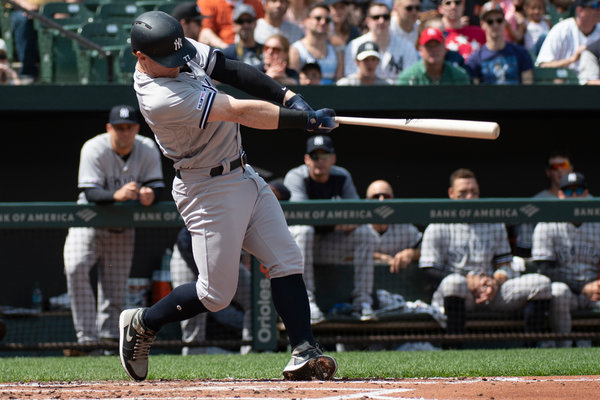 After the game, Sanchez grinned while describing how thrilled he was with his performance at the plate. His six home runs over all pace a Yankees squad that has 11 players on the injured list. Although the injured hitters Miguel Andujar, Didi Gregorius, Giancarlo Stanton and Aaron Hicks accounted for 119 of the Yankees’ major-league-record 267 homers last season, the lineup still showed off its firepower against the Orioles, who are rebuilding after posting the worst record in baseball in 2018.

“Sometimes, it takes the whole 40-man roster,” Frazier said, adding later, “We’re someone to still be worried about whenever we come to town.”

The power display, which also featured home runs by shortstop Gleyber Torres and catcher Austin Romine, supported the stout pitching of Domingo German, who did not allow a hit until the sixth inning. German has pitched well in two starts for a rotation lacking the ace Luis Severino and C. C. Sabathia, who might return from the I.L. next weekend.

“Now I have the opportunity, I’m doing everything I can to show all my work on the field,” German said. “Every start I want to execute like it’s my last.”

At the plate last year, the Yankees led baseball with 51 percent of their runs coming via homers. They were second entering Sunday.

“Never too much for us,” Yankees Manager Aaron Boone said. “I’m always good with us hitting as much as we need to.”

The Yankees needed Sanchez now, and on Sunday he reinforced the team decision makers’ faith in him — previous defensive and baserunning miscues and all.

“He’s a great player that’s still growing, and it’s our job to help him continue to reach his peak in every facet of the game,” Boone said. “He’s making strides in a lot of areas of the game. And we know we’ve got a special talent on our hands and a guy that impacts the game — period.”

Sunday’s win was the 2,000th of Brian Cashman’s 22-season tenure as the Yankees’ general manager.