Richard Litt likes the name. Castelvecchio, a medieval building in northern Italy. It's apt. It's also the name of his bright two-year-old, a winner of his only start when coming from near last. Litt's a young man in an older man's game. Trying to get a foothold – heck, a toehold would do – in the Sydney training ranks. He's got a young horse. You can dream with them. He's dreaming this week.

"We're pretty delighted to have a horse in this race," said the 29-year-old Warwick Farm trainer, set to saddle up his sizzling Canterbury debut winner in the $2 million Inglis Millennium at Warwick Farm on Saturday. 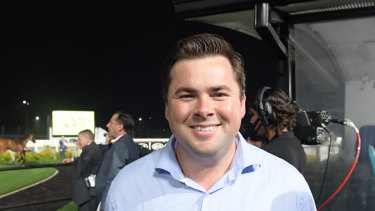 "I'm only young and I started off three years ago and I was even younger then. Now we've got great clients and we only have 17 horses. Every single owner we have is fantastic and very supportive. Things are getting better for us all the time."

How much better? Maybe ask him a bit after 4.30pm on Saturday.

He hasn't had a horse line up in a race of this significance. Might not have another one for a while yet. But Castelvecchio looks a spoiler in a race bookmakers have dubbed a two-horse battle between crack colts Dawn Passage and Accession.

One of the youngest trainers in Sydney has combined with one of the longest-serving equine owners, former construction guru Ottavio Galletta entrusting Litt with the $150,000 Dundeel colt after meeting the horseman as he helped with Malavio's recovery from knee surgery.

By his own admission, Litt doesn't usually get yearlings that expensive. But Galletta knew he had a horse – and trainer – to work with.

"It's been over a good few years now," Litt said of the Galletta union. "This horse wasn't cheap either and for them to entrust me with an expensive horse is fantastic as well. That's good exposure, too. If he has confidence it will give other people confidence … it might bring more owners in.

"It's good for me [to have a horse in the race], but it doesn't bother me. It's good for the stable and everyone involved in my stable. It's exciting. He'll run well and we're excited."

Winning the first Inglis Millennium won't mean a spot in the Golden Slipper given the restricted nature of the race, but it will mean a helluva lot to Litt and Galletta.

It means a lot to have a nice horse. He will be better next year and we're hoping we can win the Derby.

"It would also mean to me we get $1.2 million," Galletta joked. "But it means a lot to have a nice horse. He will be better next year and we're hoping we can win the Derby."

Josh Parr will remain in the saddle of Castelvecchio, who was quoted as a $20 chance with BetEasy on Thursday for the Inglis Millennium. Dawn Passage ($3) and Accession ($3.30) dominated the market.