Saturday could be the most exciting 24 hours in the history of Qatar Bloodstock, starting with Zousain's attempt to emulate his father and their stallion Zoustar in the Coolmore Stud Stakes and ending with champion European three-year-old Roaring Lion in the Breeders Cup Classic.

The worldwide operation has become a power in just a couple of years and is at the centre of the action on two of the most famous tracks in the world – Flemington and Churchill Downs – with two horses that could fulfil dreams. 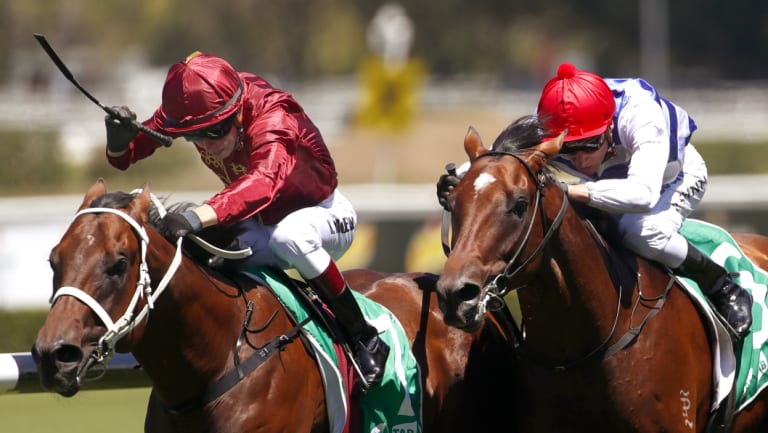 Just like dad: Zousain will be out to emulate his father in Saturday’s Coolmore Stud Stakes.Credit:aap

But it's Zousain at Flemington, which holds the attention of Qatar’s racing manager David Redvers even though he will be in America.

“I have more expectation for Zousain than I have for Roaring Lion,” Redvers said. “Although Roaring Lion is the best three-year-old in the world and he is a hugely imposing and tough individual, he has won four group 1 races.

“For Zousain this race means more because he needs that group 1. I very much feel this is his type of race and to match his dad’s effort would be amazing.”

Widden Stud, the home of Zoustar, have already brought a share in Zousain this spring and will pay a kicker as part of the deal should he wins on Saturday. Victory would probably take his value to more than $30 million.

“I would happily pay it if he get a win in the Coolmore. We are looking forward to him standing next to his old man at Widden,” said Antony Thompson, Widden boss. “Zoustar has done a wonderful job and Zousain had the same attributes and potential.”

Redvers added that the Zoustar purchase had turned into the perfect move for his operation.

“To make the business sustainable you’ve got to find and keep finding these young stallions, which in turn generates income and keeps the show on the road,” Redvers said. “Zoustar has been an outstanding success and he will come to Tweenhills Farm next year and it is very much anticipated.

“The plan was to secure stock that would turn into stallions and in Roaring Lion and hopefully Zousain we have.

Zousain has won two of his eight starts but it is the narrow seconds to The Autumn Sun in the JJ Atkins as a two-year-old and Golden Rose in September that have him at the top of market.

“It has been frustrating to watch Zousain get beaten in two group 1s by his stablemate [The Autumn Sun], which is obviously an outstanding horse,' Redvers said.

“Chris Waller is very confident that he will love the straight and keeps telling us he is a carbon copy of his dad if that is possible.

“It would typical of him if the other filly, Sunlight, who we owned a chunk of, would go and beat him, but I don’t really want to think about it.”

Roaring Lion has won the Eclipse Stakes, International Stakes, Irish Champion Stakes and Queen Elizabeth Stakes but faces the transition from turf to the dirt in the championship race of America,

“We are asking him to do the near impossible,” Redvers observed. “He going from jumping and settling and showing a massive turn of foot on the turf.

“To having to kick out and get to the front or take a massive massive pull and keep out of the dirt [kickback]. There are so many factors again him.

”If he wins it would be an amazing effort and hopefully by then we are celebrating from Zousain at Flemington.”