Unity IS strength! 11 crabs destined for the dinner table ‘make group escape from the kitchen’ by crawling in sync

When you are in a desperate situation, every little step makes a big difference, as these crabs have demonstrated.

A trending video from Asia has captured how 11 crabs made a bid for freedom by crawling at the same speed.

The crabs, which were firmly tied to each other with strings, could be seen slowly moving on the ground with synchronised moves. 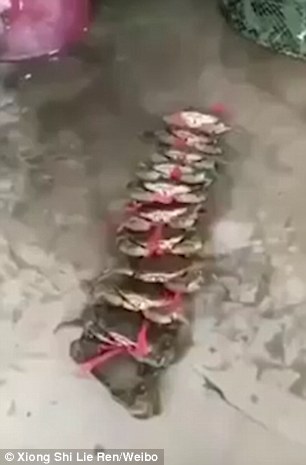 One-two-one-two: The 11 crabs are seen making their way to the door as they made the group escape (left). With red strings tying them up, the team march at an orderly rhythm (right)

According to reports at the time, the crabs had been bought by a man from a wet market before being tied up and left in his kitchen.

But when the man later returned home, he witnessed the group of animals fleeing towards the door in an orderly rhythm.

The video has since been shared by web users across East Asia.

Many web users have been amused by the crabs’ courage and determination, as one mentioned the crabs ‘have shown mankind what teamwork is’.

While another user asked in a Taiwanese Facebook page ‘BaoXiaoGongShe’ : ‘Is this a crab-version of Prison Break?’

‘Fighting! Definitely not going in the pot!’ wrote Chuyen La, a Vietnamese Facebook group while sharing the video.

‘Were these crabs sent by some secret organisation?’ Web user ‘Kxianmima’ joked on Weibo, a Chinese equivalent of Twitter.

‘This is what we called “team spirit”,’ said Facebook user ‘Peirkee Wong’. The clip was reportedly filmed by a man in Jiujiang, south-east China, who bought the crabs