200kg of cocaine intercepted on boat off NSW coast

A man has been arrested after police intercepted a boat carrying large quantities of cocaine off the NSW coast on Thursday. 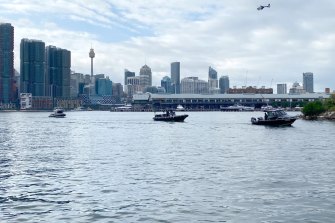 The joint police operation coming into Sydney on Thursday.Credit:Police Media

Police allege they seized about 200 kilograms of cocaine when the boat’s cargo was unloaded and seized at Balmain, in Sydney’s inner west, on Thursday.

The investigation was prompted by intelligence from international law enforcement, received on Saturday.

The vessel underwent investigative and forensic analysis while docked at Balmain, police said.

The man arrested is expected to appear in Sydney Central Local Court on Friday.