These delectable treats are full of light-bulb moments that educate as much as they impress.

A great baking recipe can seem like wizardry. A handful of unassuming pantry staples are mixed together and heated (or sometimes chilled), and what results can anchor a celebration or simply make a bad day better. In the most brilliant of cases, it can surprise and delight with its inventiveness.

Behind every clever, inventive technique is a clever, inventive cook who looks at a recipe and wonders, How could this be done better? The savviest home cooks and recipe creators always think about how to streamline and innovate in ways big and small, and the 24 recipes below illustrate just that.

Not all involve baking in the traditional sense: Several are prepared on a stovetop, in a food processor or set in the refrigerator. What unites them are smart techniques, the eye-opening approaches that educate as much as they impress. We hope that these recipes — a cake that get its rise from 7Up or the rich, silky mousse that forms out of just chocolate — will show you the possibilities of certain ingredients, and expand your understanding in the kitchen.

Make one, two or all 24, and let them dazzle you — if not by what they teach you, then by their taste. 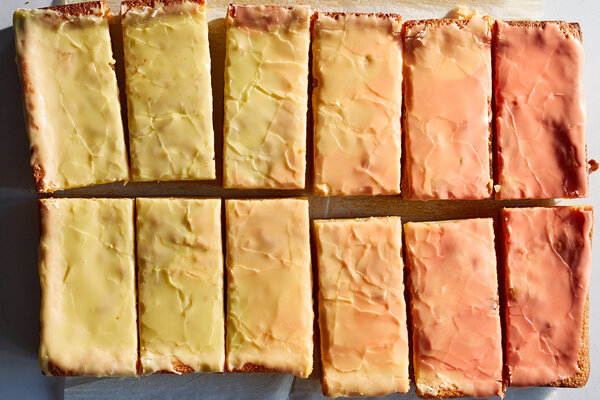 Genevieve Ko made this recipe for butter mochi, a tender, chewy dessert from Hawaii, open to adaptation. Substitute the coconut milk with whole milk, evaporated milk or a combination of the two. And finish it however you like. Without adornment, the top of the butter mochi crackles, but toasted coconut would add even more crunch. Or a simple passion fruit glaze dyed into a striking ombré would create showstopping results with minimal effort. The only nonnegotiable ingredient is the Mochiko, the sweet flour that makes this treat almost marshmallowlike.

Yes, you can have an elegant dessert ready in 10 minutes, no mixer needed. This recipe, which Melissa Clark adapted from the molecular gastronomist Hervé This, forgoes the cream, eggs and hand mixers required by many mousses, prioritizing chocolate and chocolate alone. Melted chocolate is set in an ice bath, hand-whisked and finished with fleur de sel for a final tally of two ingredients — three, if you count the ice.

This Bundt cake, which Margaux Laskey adapted from Nell Lewis of Platte City, Mo., may not look like anything special, but there’s brilliance in the way it’s finished. A glaze of butter and sugar, flavored with vanilla, is poured over the cake while it’s still warm. As it soaks, the glaze makes the cake tender on the inside and crisp on the outside. Feel free to experiment: Bourbon and sherry make great substitutes for the vanilla. 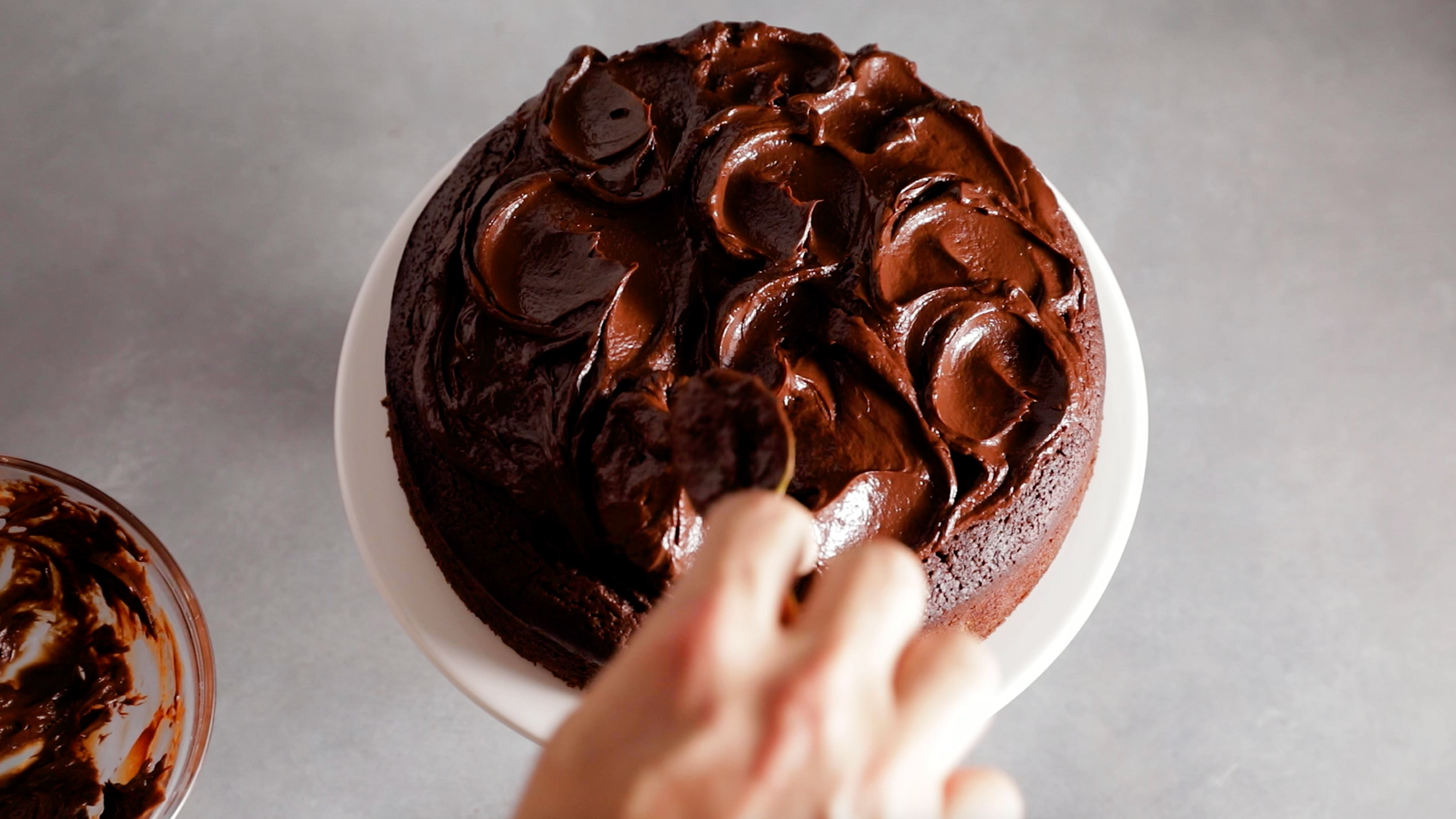 It’s hard to live up to the promise of being the world’s best anything, but this deeply chocolaty cake, adapted from the cookbook “Sweet” by Yotam Ottolenghi and Helen Goh, manages to do so. It’s made in a single bowl and is as elegant unadorned as it is with the optional ganache and mascarpone cream. And a word about that ganache: It’s made in a food processor, not on a stovetop, for a result that’s airy, lush and ingeniously streamlined.

Yossy Arefi puts the tea in tea cookies — literally — by infusing melted butter with tea leaves. It’s a true light-bulb moment, a technique that’s simple but yields fragrant results, running the cookies through with deep tea flavor. Swap in a chai blend or chamomile tea for the Earl Grey, or experiment with your favorite flavors. A handful of chocolate chips is a nice addition, and a cup of tea works well alongside any rendition.

Kubaneh, a flaky, butter-rich Jewish-Yemeni bread, is traditionally baked Friday night in residual oven heat, so it’s ready for Shabbat morning, but this recipe, from the chef Meir Adoni, cooks in less than 30 minutes. Like the original, it’s laminated by hand, rather than laboriously rolling layers of butter and dough. Here, the dough is pushed out into sheets using buttered hands, then rolled up and swirled into a bun. It’s messier, yes, but far more fun.

This recipe from Yewande Komolafe may not actually be baked in an oven, but it’s a showstopping cap to a meal. Tapioca pearls, which are made from cassava, a West African staple, are set in a coconut-lemongrass broth, while citrus slices, swirled in hot sugar, provide cleverness and crunch. The technique takes a little time, but produces an abundance of elegance. 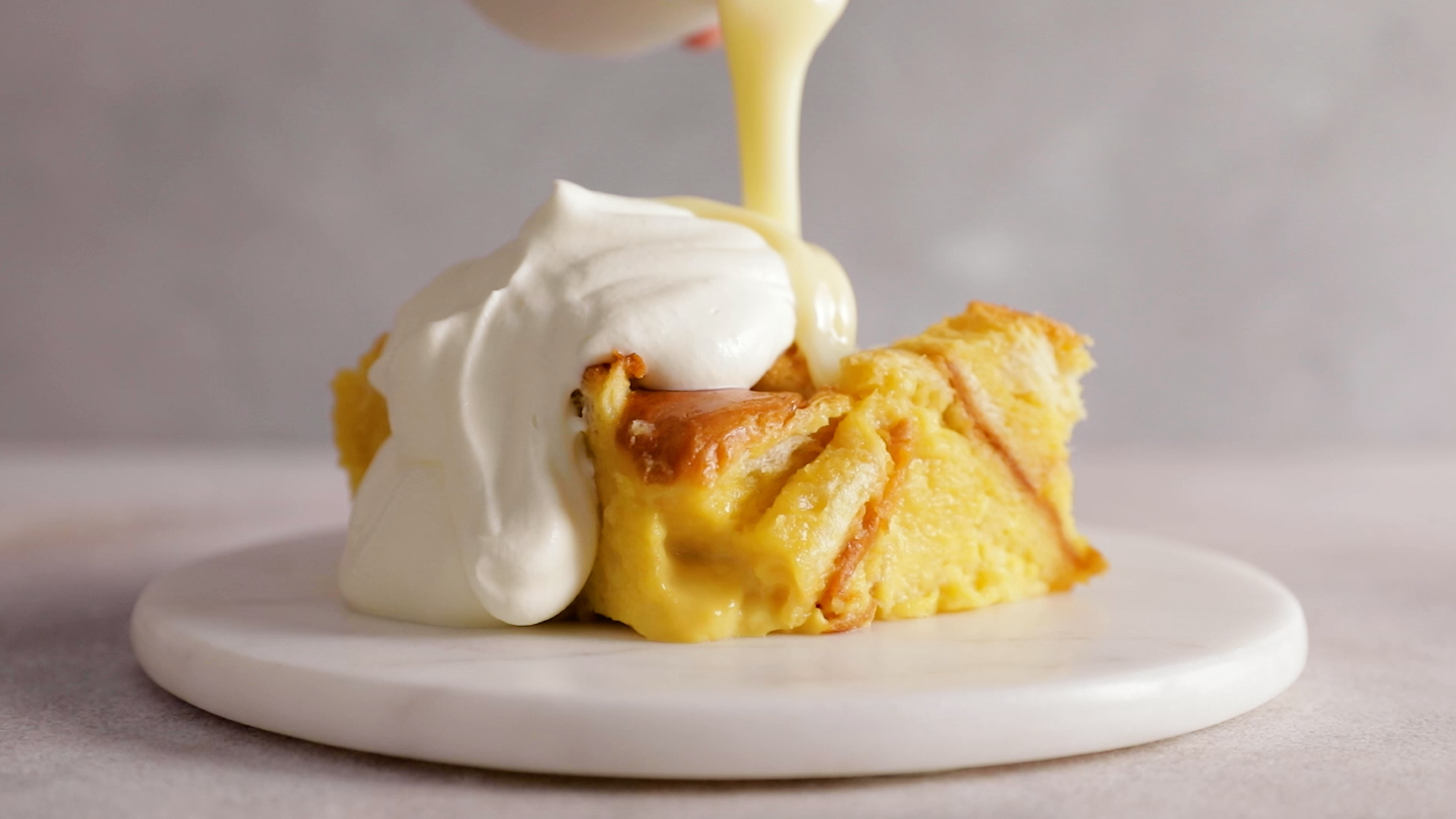 Inspired by pastel de tres leches, Samantha Seneviratne applies the three milks traditionally used in the Latin American dessert — condensed, evaporated and whole — to bread pudding. But the game-changer comes with the water bath, which helps develop a fluffy, almost ethereal bottom as the top crisps under the oven’s heat. Finish it with a little more condensed milk for a dish that melds the extra sweet with a more savory, eggy brioche.

This recipe from Eric Kim gets inspiration from honeydew-scented Korean ice cream bars, and its ease from a blender. Fresh cantaloupe cubes and cream cheese are blitzed together before bloomed gelatin adds structure, as does a rest in the refrigerator. What emerges is a creamy filling against a tender graham cracker crust — all the cheesecake flavor with only a fraction of the effort.

For a tender, crisp crust, this recipe from Clare de Boer leaves the rolling pin behind. Instead, a dough sweetened with confectioners’ sugar is chilled and grated into a pie pan, where it’s pressed in by hand for a thin, delicate crust. The key is in the grating, which cuts down on gluten formation and creates lightness. What comes out of the oven will seem nearly professional. The truth is, it’s much, much easier.

Puppy chow is a wonderful hands-on recipe to make with kids and is a Midwestern classic, with its origins likely traced back to recipe pamphlets and community cookbooks from the 1960s. Ali Slagle’s version skips shaking the ingredients together in a plastic bag, opting instead for mixing on a rimmed sheet pan. Add popcorn or more chocolate, pretzels or whatever nuts you like. Make it simply, and make it yours.

Fifteen years after Jim Lahey’s recipe for no-knead bread was first published, J. Kenji López-Alt revised it, adding a touch of acid for structure, and losing the preheated Dutch oven that Mr. Lahey’s version relied on — and that often led to scorched hands and loaves that stuck to the side of the pot. Instead, the dough is cooked under an ovenproof metal bowl spritzed with water to create steam. It’s a small change, but one that respectfully builds on a classic.

This pie, which Samin Nosrat adapted from the musician and podcaster Hrishikesh Hirway, originated with the Hirways’ Thanksgiving traditions. Over time, they became a cultural mash-up — part Thanksgiving, part Indian potluck — and led Mr. Hirway’s mother, Kanta, to this recipe. It’s a brilliant use of canned fruit, perfect for any time of year. Kanta Hirway died in 2020, but her legacy, and her inspired recipe, live on.

This recipe passed through many hands before it made its way to Sam Sifton, and then The Times, but it has its origins in a 1971 cookbook published by the Symphony League of Jackson, Miss. The soda adds flavor, of course, but it’s really the fizz that’s important, stepping in for the usual baking soda and baking powder. Use sparkling water or even sparkling wine instead in this unexpectedly adaptable cake.

We all know the best part of a homemade cinnamon roll is the middle. The worst part? Arguably, waiting for the yeasted dough to rise. But this recipe, which Margaux Laskey adapted from Allysa Torey’s cookbook, “At Home With Magnolia: Classic American Recipes From the Owner of Magnolia Bakery,” gets around that with a combination of baking powder and baking soda. They’re ready in 45 minutes, so you can spend less time baking and more time savoring.

These brownies, which appeared in “Alice Medrich’s Cookies and Brownies,” and which Julia Moskin brought to The Times, get their fudgy texture from a quick ice bath just after baking. The shock causes the batter to contract and concentrate, intensifying its character. (Bake the brownies in a metal pan, as glass can crack with the temperature change.) Nuts are optional but break up the richness — if, of course, that appeals. 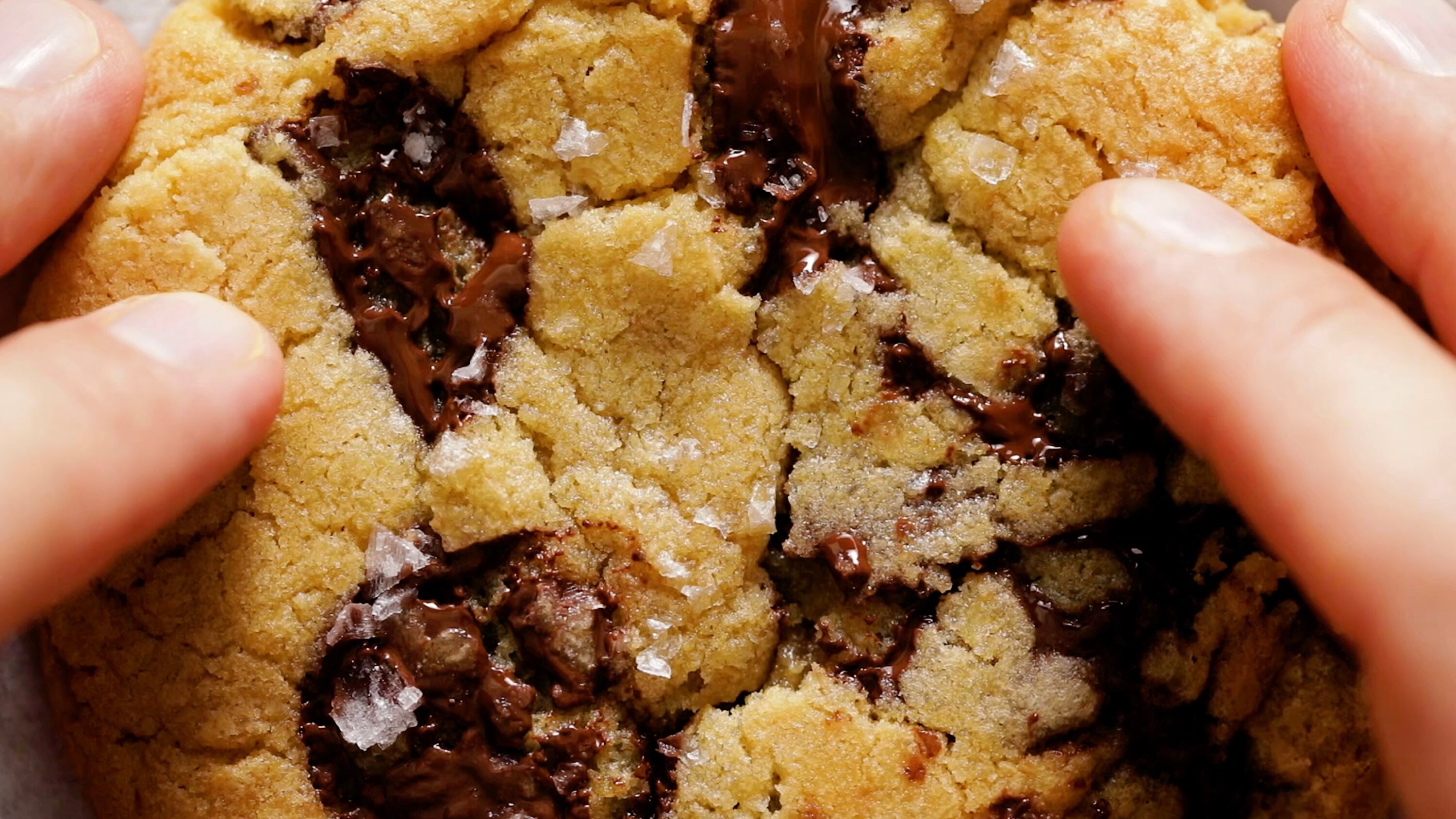 This is it: the classic New York Times chocolate chip cookie recipe. For years, thousands of readers have turned to this rich recipe. Margaux Laskey, an editor at New York Times Cooking, even made them for her wedding. A long rest — at least 24 hours, preferably up to 36 — before baking yields a firmer dough and, in turn, a chewier cookie. Make a double batch and freeze any extra dough balls so they’re ready to pop in the oven whenever you like.

This cake wants to go places. Genevieve Ko bakes a layer of cream cheese frosting atop a warmly spiced, extra-carroty cake batter for a sturdy treat that holds up well to travel. It’s a smart move made even smarter by the fact that both the batter and the topping are mixed by hand in the same bowl, so you’re out the door with minimal cleanup.

A bit of miso adds balanced saltiness to these highly adaptable cookies from Krysten Chambrot. Any nut-based butter works well in place of the peanut butter, as does tahini. As they bake, the cookies are pulled out of the oven and slammed on the counter. This technique, borrowed from Sarah Kieffer, who created an internet-viral chocolate chip cookie, lets the air out and results in an extra chewy cookie.

Unmolding a chocoflan feels like a great feat: A Bundt pan is lifted to reveal a creamy flan atop a rich chocolate cake — but the two layers swapped places in the oven. It’s no wonder this celebratory Mexican staple is known as el pastel imposible (the impossible cake), but this recipe, which Genevieve Ko adapted from “Chicano Eats” by Esteban Castillo, is surprisingly simple. The key is in liberally greasing the pan and letting the cake firm up in the refrigerator.

Melissa Clark got this salty-sweet recipe from Lost Bread Company in Philadelphia. The bakery blitzes its sourdough pretzels into crumbs, then adds them to the dough, but this version uses store-bought pretzels, toasting the crumbs and incorporating them alongside the flour and sugar. It also skips the lye solution that so often goes into making pretzels, employing baking soda or an egg white instead. What’s lost in flavor is minimal; what’s gained in ease is paramount.

For this tart, which Dorie Greenspan adapted from Jean-Marie Desfontaines of the Paris patisserie Rollet Pradier, there’s no zesting or juicing a number of lemons. Instead, one sliced, seeded lemon is thrown into a food processor with sugar, eggs, cornstarch and butter. The outcome is bright and exhilarating in its depth of flavor, and a perfect contrast to a crust that’s closer to butter cookie than pie.

You don’t always need eggs to give a cake its structure, as this recipe from Amanda Saab illustrates. This semolina cake soaked in a floral syrup gets its texture from yogurt that’s been mixed with baking soda and left to sit until doubled in size. Ms. Saab, a social worker, got the recipe from her Lebanese grandmother and serves it at iftar dinners during Ramadan, but it can be enjoyed year round.

Jerrelle Guy knocked it out of the park with this recipe. She treats pancake batter almost like biscuit dough, processing cold butter into flour, then adding liquid, a technique that reduces gluten formation for a fluffier result. What also makes this recipe shine is its adaptability. Don’t care for chocolate? Sprinkle finely chopped fruit on top. Or simply skip any topping and serve with a little maple syrup and butter.