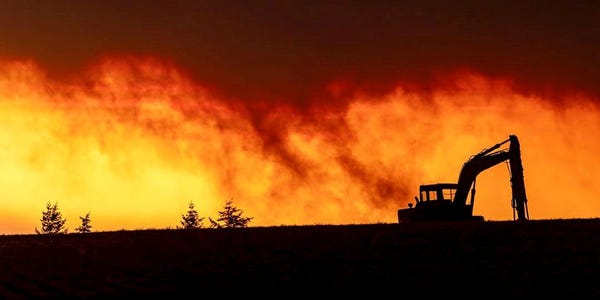 Five towns across Oregon have been "substantially destroyed" by wildfires, Gov. Kate Brown said Wednesday, requesting federal assistance to fight nearly three dozen fires raging across the state that have killed at least two people and scorched over 300,000 acres.

"This could be the greatest loss of human lives and property due to wildfire in our state's history," Brown said at a news conference, as reported by Oregon Public Broadcasting.

Oregon television station KOIN reported Wednesday afternoon that it had confirmed the first two fatalities from the wildfires: a 12-year-old boy and his grandmother, who were killed by the Lionshead fire southwest of Portland.

Brown told reporters that wildfires — there are 35 of them in Oregon alone — had largely destroyed the towns of Detroit, Blue River, Vida, Phoenix, and Talent.

"Hundreds of homes have been lost, and we continue to carry out mass evacuations across the state," Brown said in her prepared remarks, adding that she expects to "see a great deal of loss, both in structures and human lives."

The governor attributed the fires, in the generally cool and moist Pacific Northwest, to "the worst fire conditions in three decades: dry air, dry brush, and hot winds."

"Our number one priority right now is saving lives," she said.

Have a news tip? Email this reporter: [email protected]