Man with £50,000 bionic penis sees dreams of having a family put on hold as he is banned from sex for TWO MONTHS after falling seriously ill days after losing his virginity

A man desperate to start a family after being fitted with a £50,000 bionic penis has told of his frustration at being banned from sex for two months after falling seriously ill.

Andrew Wardle, 46, had only just lost his virginity to his long-term girlfriend Fedra who had waited years for him to be given a penis.

Both are longing to be parents and had hoped to start trying for children straight away.

But within days of having sex for the first time, Andrew was writhing in agony due to a totally unrelated medical problem and fearing once again that his hopes for fatherhood had been dashed.

Unconscious for five days, he initially thought he had pancreatic cancer before being told his liver was damaged, he was suffering gall stones and pancreatitis and he would have to have his gall bladder removed. 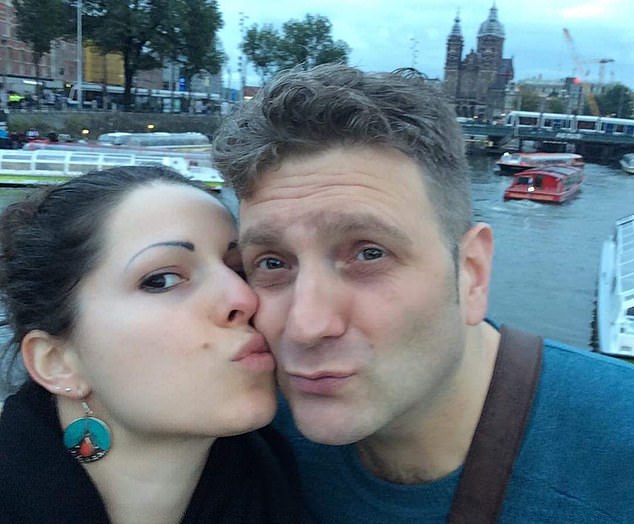 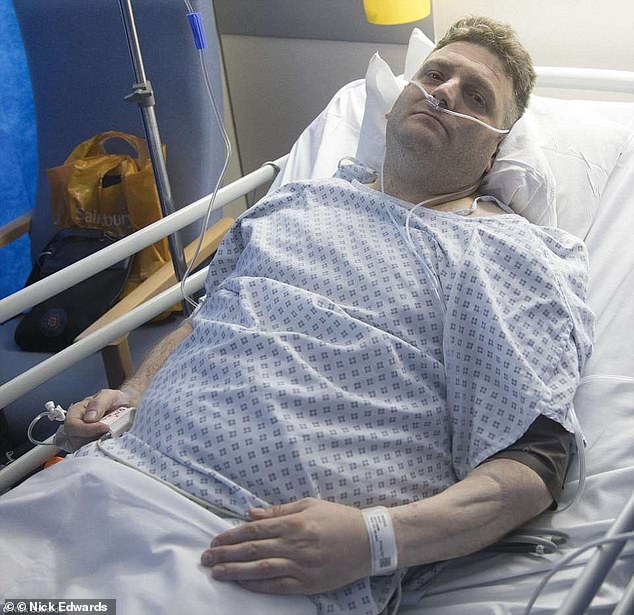 Andrew, 46, from Manchester was born with bladder exstrophy – a congenital abnormality in which his lower abdominal wall had not formed properly – and without a penis

He is not allowed to have sex until that process in complete, in case it raises his stress levels.

In an exclusive interview, he told MailOnline: ‘I’ve never been through pain like that in my life – and I’ve been through some pain. I was terrified that I would be dead within the year.

‘Although I now know I’m not going to die, it still feels ironic that I am unable to have sex as I have to be really careful not to raise my stress levels.

‘Fedra and I are really keen to have children but obviously we’ve had to put that on hold until after the operations.’

Andrew, from Manchester, was born with bladder exstrophy – a congenital abnormality in which his lower abdominal wall had not formed properly – and without a penis.

After years of operations, he had the third stage of his phalloplasty – or penile implant – four months ago.

After having an erection for ten days, his implant was deflated and he was able to have sex for the first time.

But, just days later, while on a romantic birthday break in Amsterdam, he suffered chronic stomach pains and began vomiting. 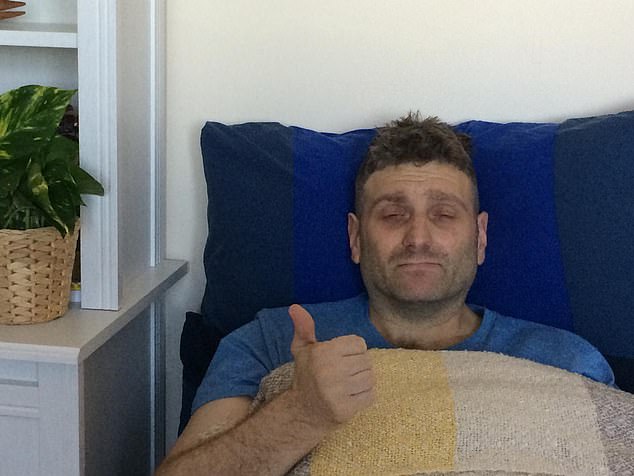 But within days of having sex for the first time, Andrew was in agony due to an unrelated medical problem and fearing once again that his hopes for fatherhood had been dashed 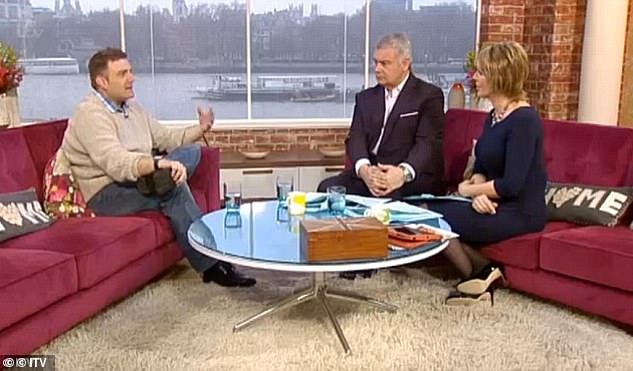 Andrew, pictured speaking on This Morning was told he was suffering gall stones and pancreatitis and he would have to have his gall bladder removed

My temperature was constantly at 39 degrees centigrade,’ he said. ‘It was like living in a weird dream.

The couple flew back to Britain on September 7 but the cramps increased, his temperature soared to 39 degrees centigrade and he could not stop being sick.

When he choked on his vomit, Fedra pummelled his chest, then called on ambulance.

‘We had gone to Amsterdam for three nights to celebrate my birthday,’ said Andrew.

‘I had never been before although Fedra loved it. We had an amazing time visiting the museums – the Van Gogh Museum, the Rijksmuseum – and Anne Frank’s house. But on the last day I was very ill.

‘We came back to England and I relaxed for a few days but I was being sick all the time, couldn’t drink water or breathe properly. Fedra phoned an ambulance and the paramedic diagnosed pancreatitis on the spot.’

Andrew spent the next 15 days in hospital, dosed up on morphine, while he underwent a series of scans. Fedra visited every day.

He was about to go down to theatre, to have his gallbladder removed, when his operation was suddenly cancelled. 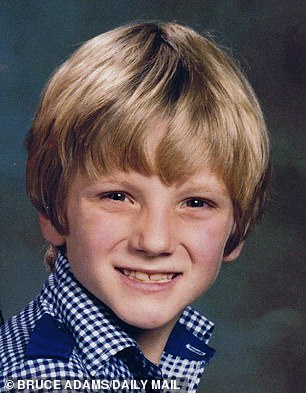 ‘They came to me in the morning and I thought: ‘They’re coming to take me to the operating theatre,’ said Andrew and the surgeon said: ‘We can’t operate.  We’ve found a blockage in your liver and if we move your gallbladder you could get really bad pancreatitis. So, we have to unblock your liver first.’ I was so angry because I just wanted it out.’

‘As soon as they told me I had pancreatitis, I made the mistake of Googling it and came up with Cancer. I was petrified.

‘All the symptoms were similar, vomiting, cramps and sweats. I’ve known a couple of people with pancreatic cancer and they don’t last long.’

Since he came out of hospital two weeks ago, Andrew has again spent his days waiting for the post, to find out when he will have the operations. ‘I’ve had one attack since,’ he said.

‘It’s like the world’s worst stomach ache. You can’t do anything for hours and you just shake. I’ve learnt to manage it with a simple diet, avoiding spicy food and drinking lots of water.

‘But I can’t wait for it to be over. We’re supposed to be going to Budapest in a few weeks to visit Fedra’s family – Fedra has booked her ticket but I’m waiting until the last minute to see when the operation is.’

‘I still don’t know whether it is going to be possible for me to become a father. We were offered a test to find out but decided we would wait until after the operation.

‘Now we have to wait again. But if we find out that we can’t have them, we will definitely adopt. We want to be parents 100 per cent.’

Fedra added: ‘It hasn’t been the easiest time but as my grandmother used to tell me: ‘Tough times build character’.

‘We thought he had a Norovirus because he was throwing up so much and had a really high temperature but then he almost choked on his own vomit so I had to call an ambulance. 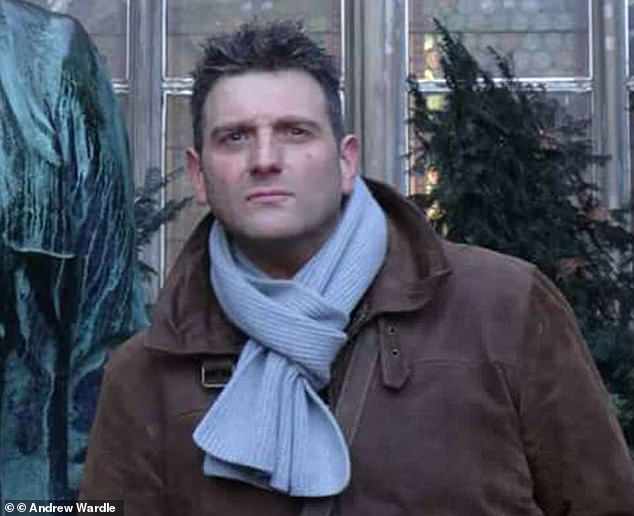 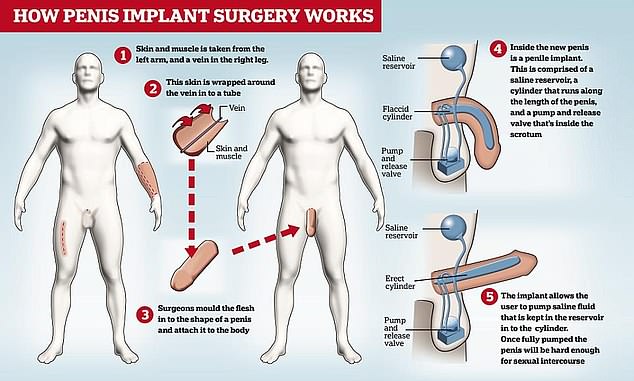 A diagram shows how Andrew underwent the third stage of his £50,000 phalloplasty – or penile implant – at University College London’s Hospital three months ago

‘He is better now – we’re looking after his diet really closely to keep him on a level – but we both can’t wait for the operations. After that we can start thinking about children.’

Andrew has spent his life in and out of hospital but it was only in 2012 – when he was 39 – that he was finally thrown a lifeline.

Urologist Dan Wood, of UCLH, built him a new bladder while David Ralph, a fellow urologist and specialist in genital reconstruction, created his penis.

He had his first operation to remove his urostomy bag – his urine had been diverted into a specially-converted stoma – in February 2014. He now has a Mitrofanoff – or catheter – to enable him to go to the lavatory.

Then, in November 2015, Mr Ralph operated on Andrew, building the penis from the skin, muscles and nerves in his left arm and the vein in his right leg.

He had his third operation last December, when Mr Ralph inserted the reservoir component of his penile implant into his abdomen and capped it off.

He and his team also sculpted the head of his penis. Then, in June, he was back on the operating table for two hours to have his phalloplasty completed.