8 staff members who took part in an execution last month tested positive for COVID-19, as Trump works to ratchet up executions in his final weeks 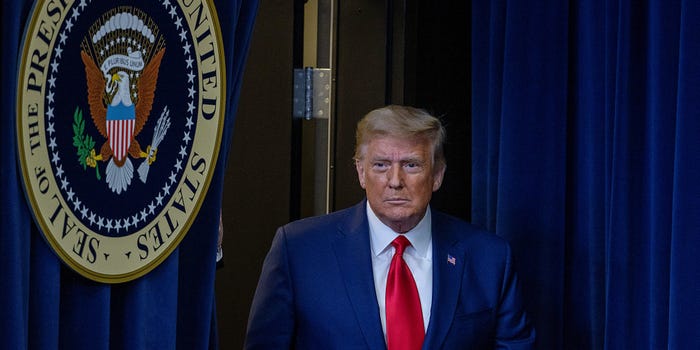 As the US government rushes to put inmates to death in a pandemic before President Donald Trump leaves office, the Justice Department disclosed that eight staff members who took part in an execution last month tested positive for the coronavirus and five of those staffers will take part in executions scheduled for this week.

The disclosure that the execution team members had tested positive for the virus, in addition to the spiritual adviser of the inmate put to death, is furthering criticism from advocates and lawyers for inmates who say the Bureau of Prisons isn't doing enough to stop the spread of coronavirus cases behind bars. The prison where the executions are carried out, in Terre Haute, Indiana, is in the midst of a massive COVID-19 outbreak.

"The fact that at least 20 percent of the BOP's execution team has contacted COVID-19 following Orlando Hall's execution speaks volumes — particularly given the fact that we don't know how many team members opted in to be tested," said Cassandra Stubbs, director of the American Civil Liberties Union's Capital Punishment Project.

In court filings, the Bureau of Prisons said eight members of the specialized execution team — a group of about 40 employees who are brought into the Indiana prison for executions — had tested positive for the virus shortly after the execution of Hall a few weeks ago.

The Bureau of Prisons plans to bring back five of those employees to carry out two executions scheduled for this week, saying that such a decision is in line with guidance from the Centers for Disease Control and Prevention. It's unclear whether they could still be infectious, but the Bureau of Prisons said the guidance allows them to interact with other people because it is more than 10 days since the positive test. Two other team members, who the agency says "tested positive more recently," will not attend the execution.

This week, the Bureau of Prisons plans to carry out two more executions — of Brandon Bernard on Thursday and Alfred Bourgeois on Friday. Three other executions have been scheduled, some just days before the January 20 inauguration of President-elect Joe Biden. And Attorney General William Barr told the AP he's likely to schedule more before he leaves the Justice Department.

A spokesman for Biden has said the president-elect opposes the death penalty and will work to end its use when he is in office.

On Tuesday, the Bureau of Prisons said a 78-year-old inmate at Terre Haute prison, James Lee Wheeler, died at a local hospital Monday, weeks after he tested positive for COVID-19. It says 264 inmates and 21 staff members at FCC Terre Haute, the federal prison complex where the executions are carried out, had confirmed positive cases for the virus. Two inmates who are not on death row at the prison are suing to try to delay the executions, arguing their lives could be at risk if the Bureau of Prisons continues to bring in dozens of people for each of the executions.

For each execution, about 100 people are brought to the prison complex, including the execution team, additional personnel for security, witnesses, and others.

During a court hearing Tuesday, a Justice Department lawyer, Jordan Von Bokern, said he didn't know whether any of the execution team members had any contact with prison staff members who have tested positive for the virus. But he argued the Justice Department should be permitted to move forward with the executions, claiming the protocols in place are adequate, and argued it isn't possible to know how the staff members contracted the virus.

"It is difficult to even make the assumptions they contracted it during the execution," he said, arguing they could have been exposed at restaurants, stores, or hotels.

Health officials have long said prisons are a perfect storm of risk factors, including poor circulation, poor social distance, and a lack of personal protective equipment

As the virus surges outside the prisons, it also is surging inside. Since November 6, the number of inmates currently infected and not yet recovered from the virus has increased by 165%, from 2,092 to 5,555. Over that same span, 17 inmates died of COVID-19.

The Bureau of Prisons has struggled from the beginning to combat the coronavirus in the 122 federal prisons across the US and inmates, advocates, lawyers, and even correction officers have been sounding the alarm for months about what they say are inadequate policies to control the spread of the virus.

The number of staff members with current positive tests surged by 79%, from 899 on November 6 to 1,613 on December 7, stretching an already threadbare workforce, according to the agency's data. The federal prison system does not require employees to be tested for COVID-19, the agency's director Michael Carvajal told Congress last week.

"I can't mandate somebody to take a test," Carvajal said. "If I could, I'd be doing it already."

Late last month, a medium-security prison in Mendota, California, hit with a wave of suspected COVID-19 cases reassigned 23 non-corrections employees to work as correctional officers because of staffing shortages.

All federal prison employees are trained as corrections officers, but one union official compared the practice known as "augmentation" to having a substitute teacher supervise a class of rambunctious children.

"This is a dangerous and extremely unsafe practice," said Aaron McGlothin, the president of the union at Mendota. "It is not a matter of if but a matter of when someone will get assaulted."