The Big Apple’s latest wonder: $265M ‘Floating High Line’ park on the Hudson complete with a 700-seat amphitheater prepares to open in NYC

A $265 million ‘floating’ public playground that was part-funded by Barry Diller and Diane von Furstenberg will open on Friday morning in New York City.

The highly-anticipated park, called Little Island, opens at 6am and sits on the Hudson River at West 14th Street. It was designed by Thomas Heatherwick – the designer who was also behind the Vessel structure at Hudson Yards.

The outlet noted that park’s opening comes as Diller stood by his commitment to fund the project even though it was double its estimated $130 million price tag.

Diane von Furstenberg, the 74-year-old Belgian fashion designer who is married to Diller, told The Wall Street Journal on a Zoom call that the park is ‘completely Barry’s dream.’ 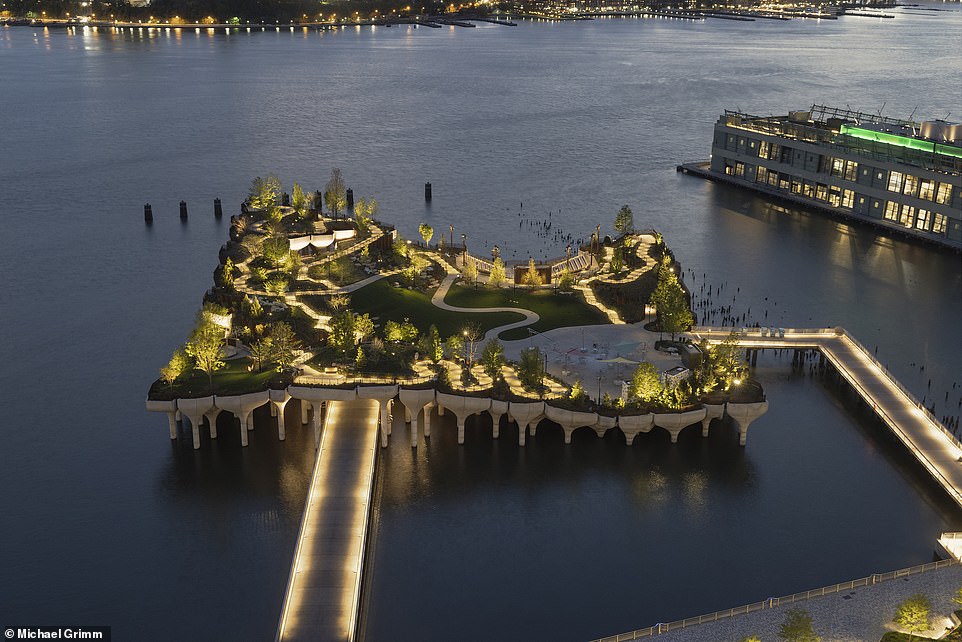 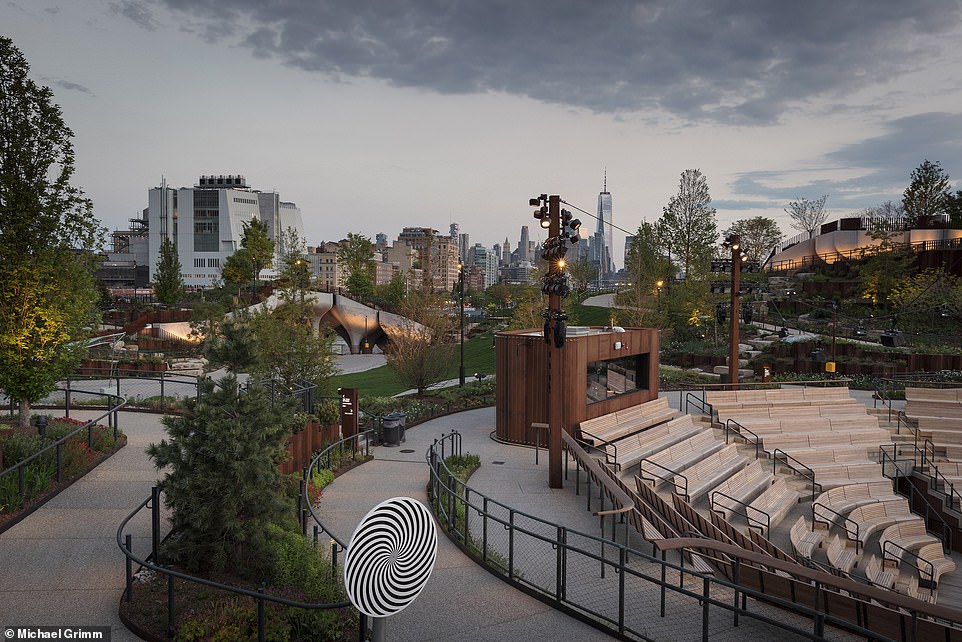 A view shows the amphitheater and venue at the park, which can seat 687 for live events – many of which are scheduled throughout the summer 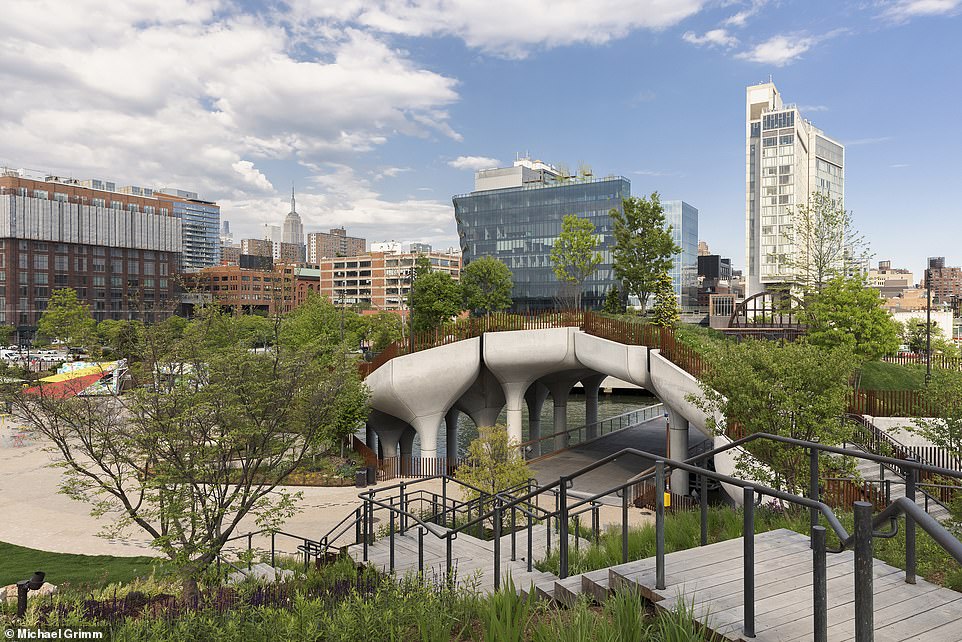 The new park is designed with peaks and valleys – making its 2.4-acre footprint feel much larger than it actually is 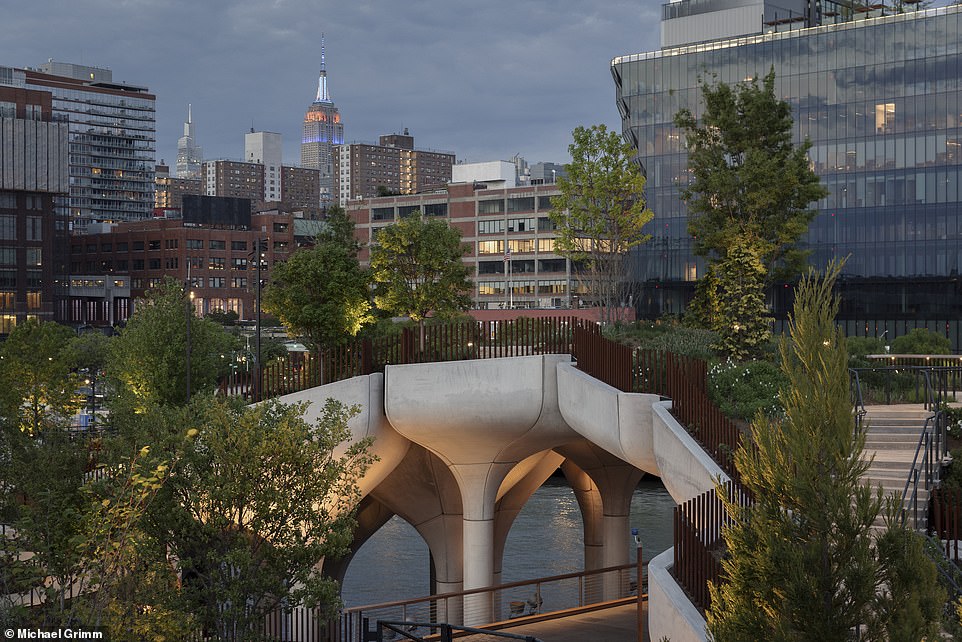 The park, situated on the Hudson River on the West Side of Manhattan has stunning skyline views including the Empire State Building 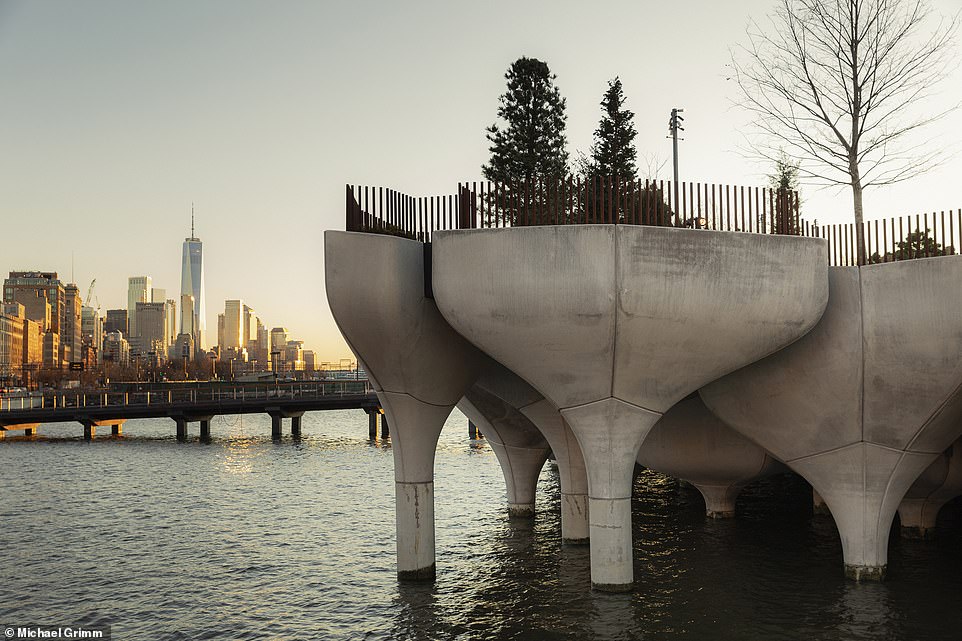 The park’s platform is supported by 132 concrete ‘tulips’, pictured with the World Trade Center in the background 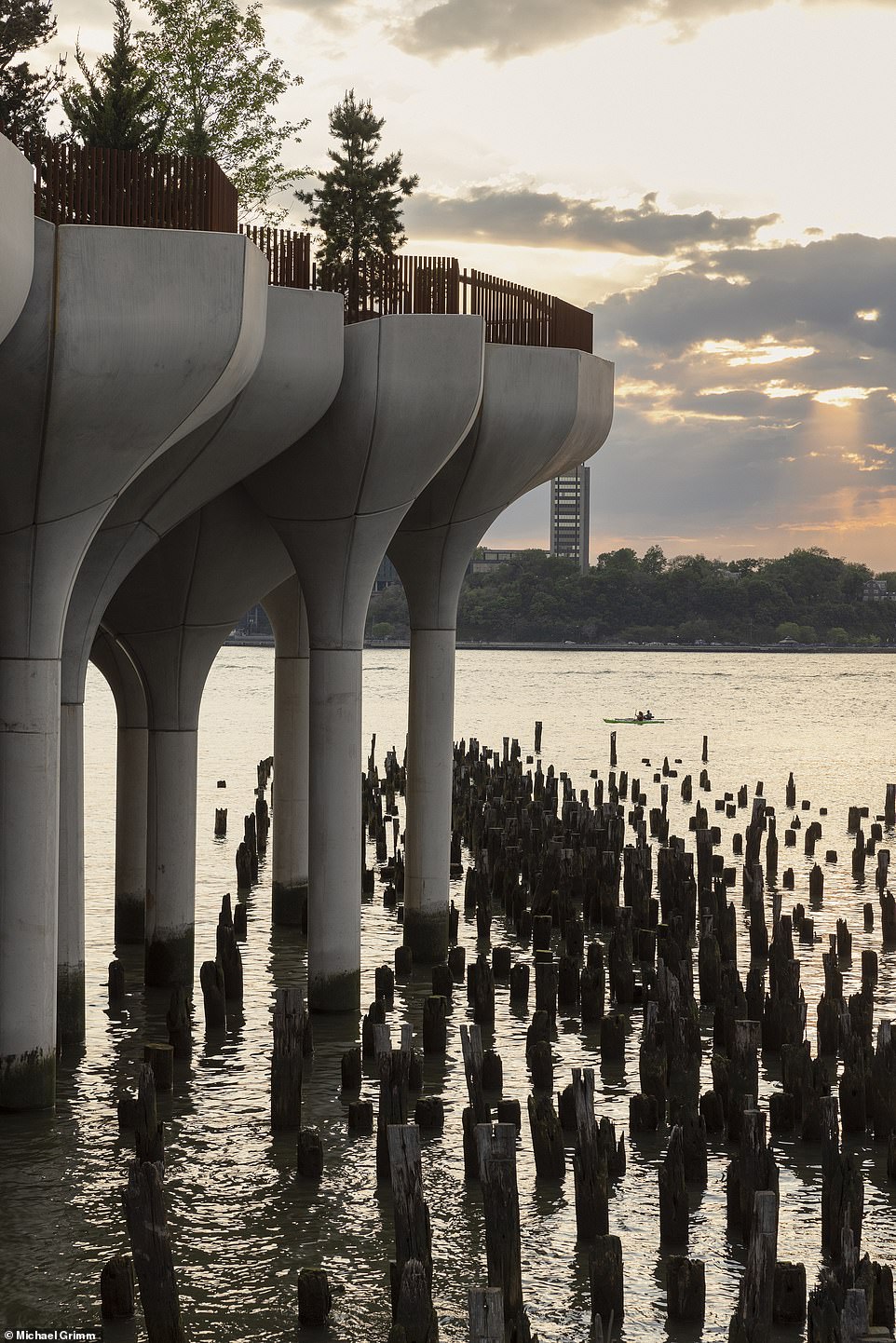 The concrete beams supporting the park are mounted above pylons where the old Pier 54 stood, which has been partially preserved for marine life

The park has been in the works for nearly a decade as New Yorkers wondered if it would ever open.

It was initially conceived to replace Pier 54 on Manhattan’s West Side, The New York  Times reported.

The pier, which was famous for having been where the R.M.S. Carpathia brought survivors of the Titanic in 1912, was eventually closed after decades as a venue for outdoor concerts.

The park’s platform is supported by 132 concrete ‘tulips’ mounted where the old Pier 54 stood, the New York Post reported.

Diller was approached by park officials to ask if he would be interested in developing the park. Diller then enlisted Heatherwick.

Eventually, ‘will-it-or-won’t-it negotiations’ were settled in 2017 by a ‘Hail Mary’ save from Gov. Andrew Cuomo, the Wall Street Journal reported. 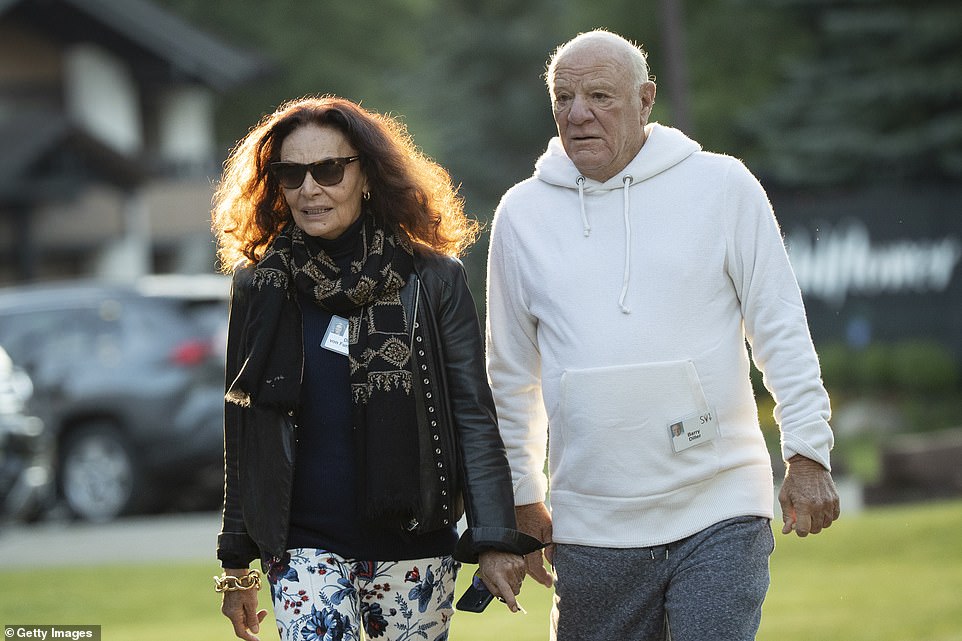 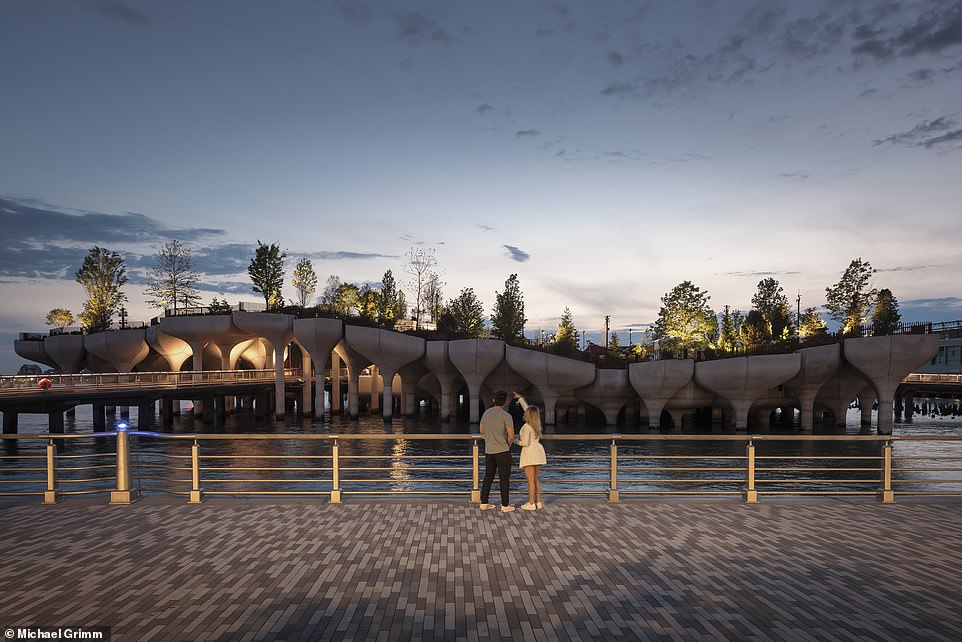 A view shows two people looking at the park and playground, which is ‘floating’ on the Hudson River 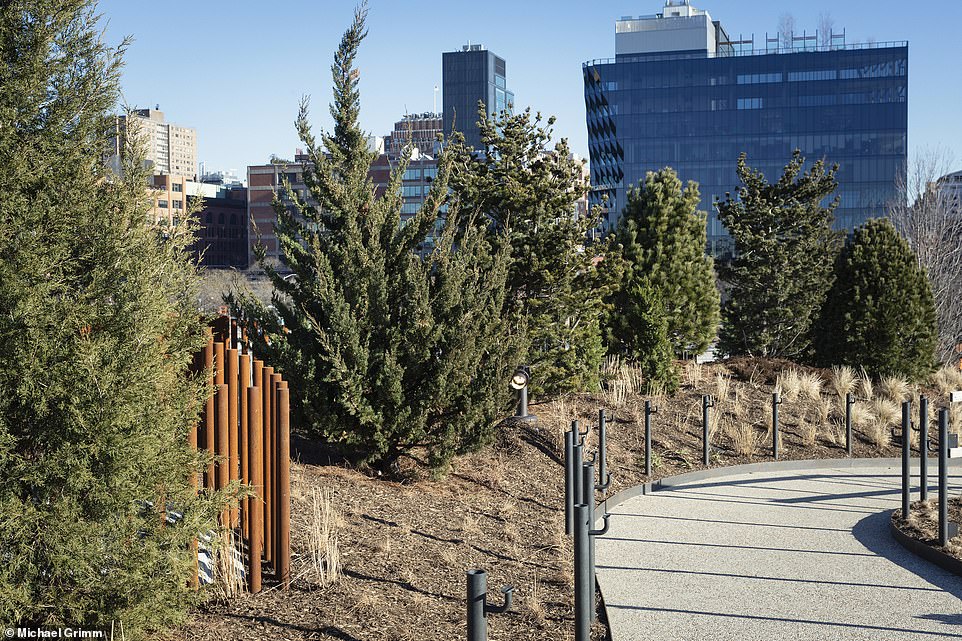 The park has more than 350 species of flowers, trees and shrubs planted, giving a peaceful feel for New Yorkers in view of the bustle of the city 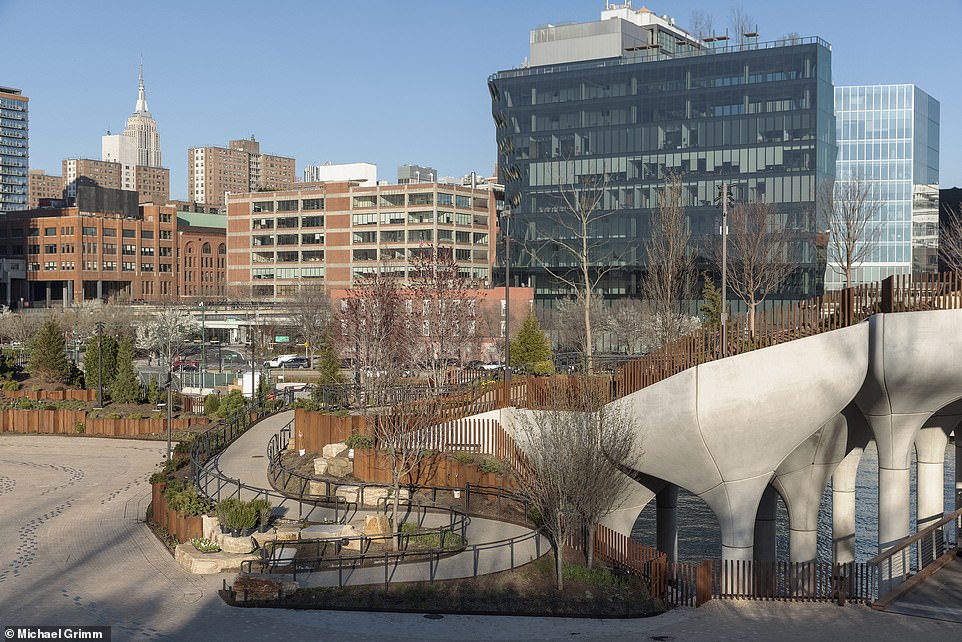 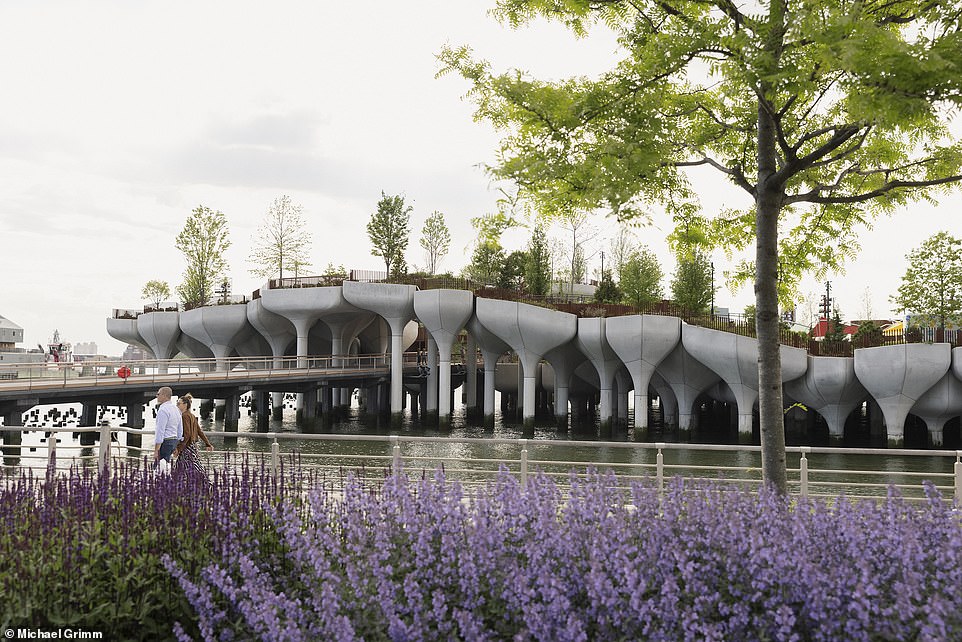 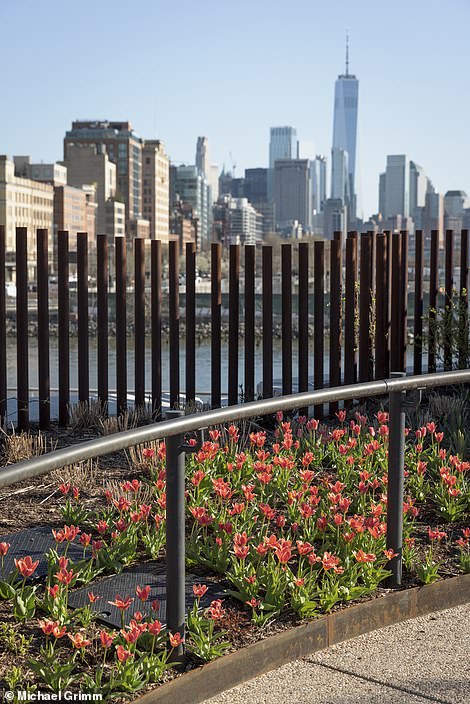 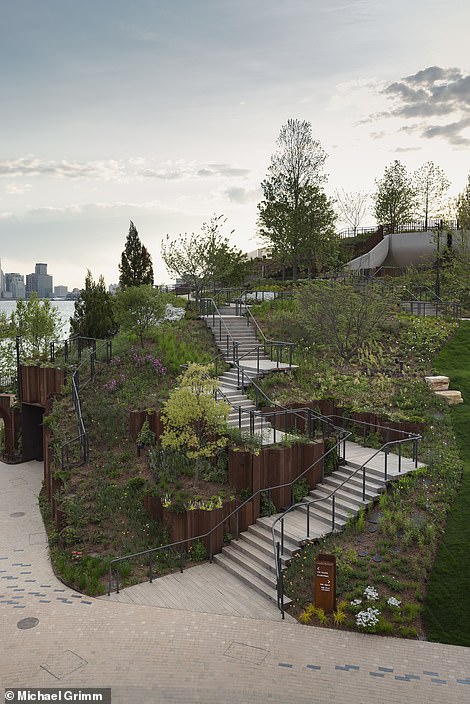 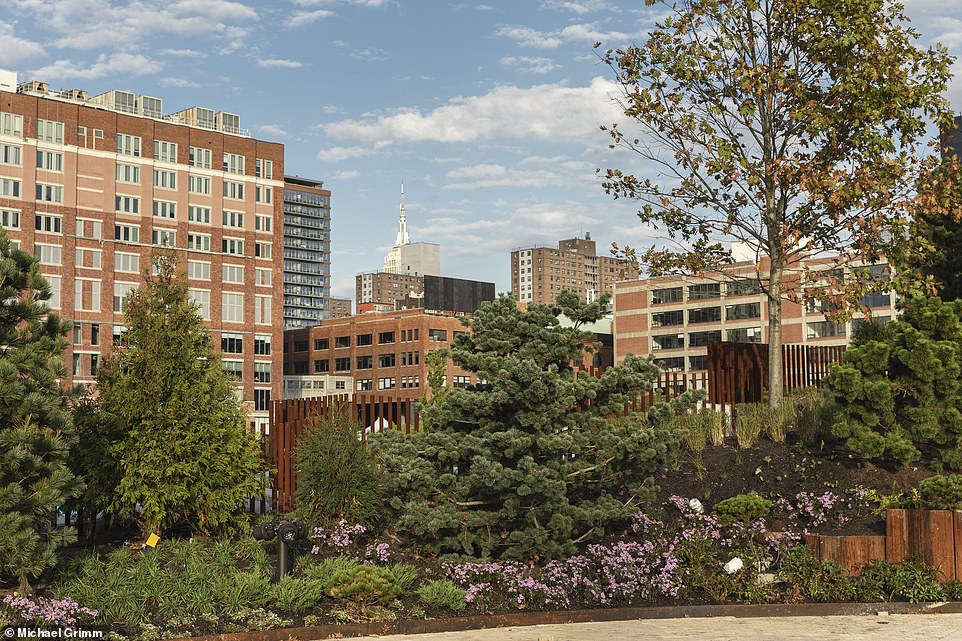 The Little Island park also includes an area with snacks, which is not pictured, that will be operated by Savory Hospitality. There are three stalls to buy food in The Play Ground area with a menu featuring items ‘curated for all ages’ 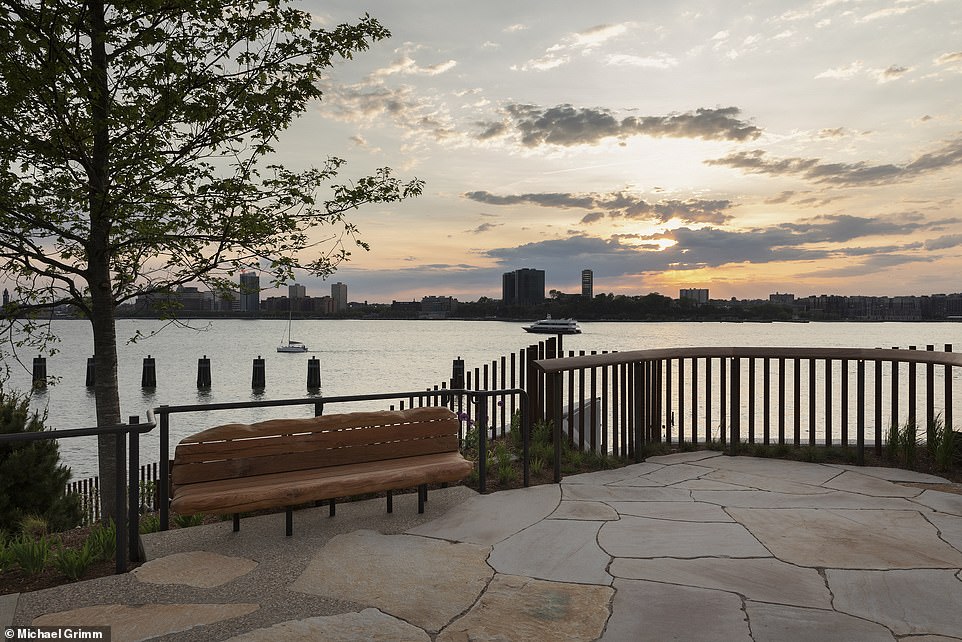 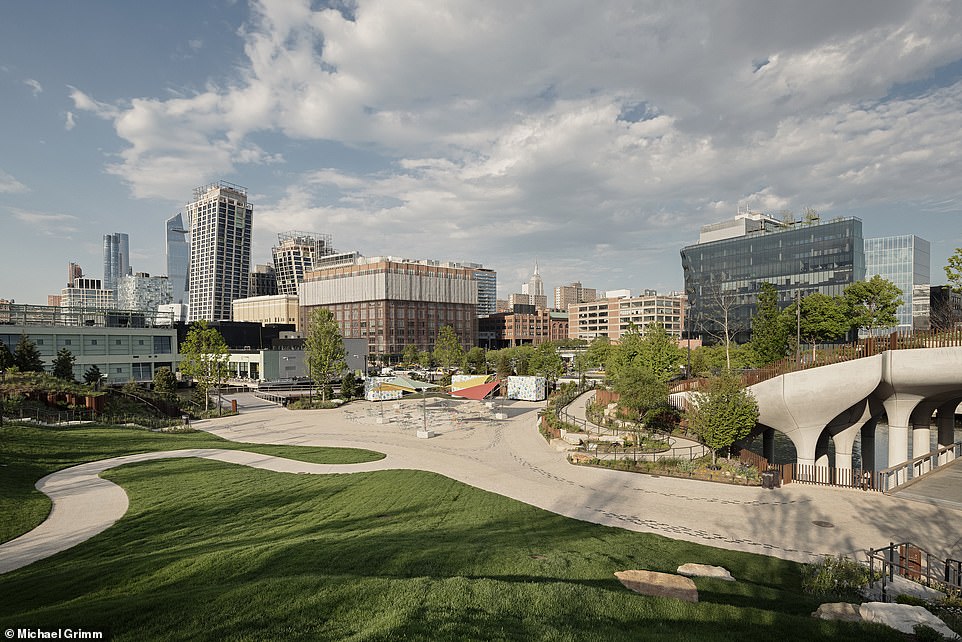 The park also includes a lawn space to relax called The Glade, as well as a a 687-seat amphitheater for live events

‘Given how many revolutions this went through, from starting to dying and starting again, I was actually awestruck when I could actually look up and see it,’ Diller told the outlet.

‘I walked on [the island] and felt pure, actual joy, which is not something I can say happens very often.’

The park’s design remains largely unchanged from when they were unveiled in 2014, according to The New York Times.

The 2.4-acre park has a playground area with snacks and a relaxing natural landscape with 114 trees of 35 species, 65 species of shrub, 66,000 bulbs, and 290 kinds of grasses, according to The Hill.

It also includes a 687-seat amphitheater and venue overlooking the water – all balanced on the columns –  where hundreds of free and cheap concerts are scheduled throughout the summer.

Some of the events scheduled to occur at the amphitheater include the live-performance return of American Ballet Theatre and a concert with the award-winning Broadway Inspirational Voices. 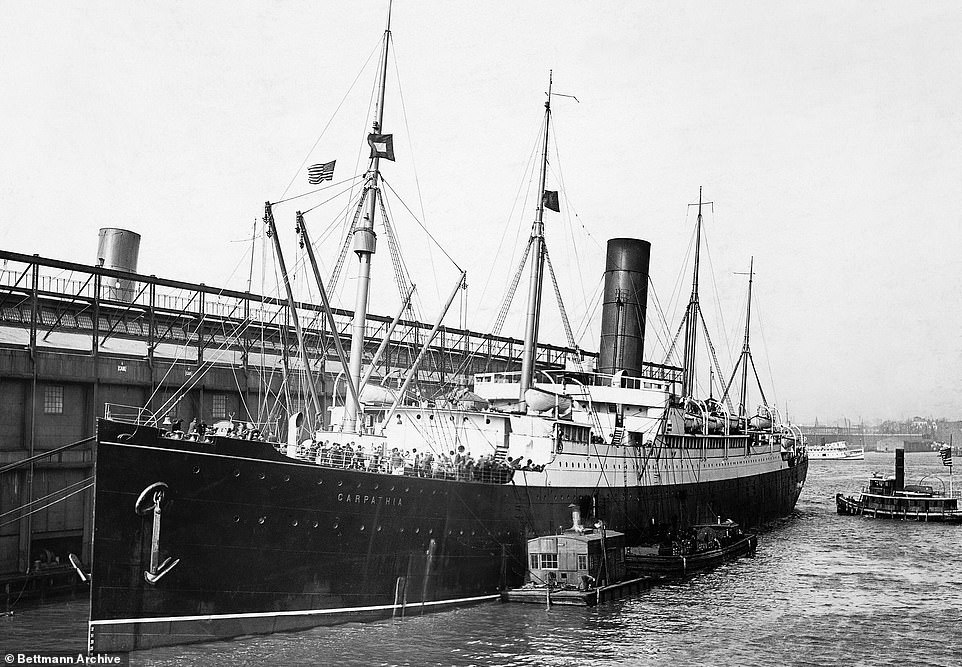 The R.M.S. Carpathia is pictured at the former Pier 54 in 1912 bringing back survivors of the Titanic. The new park sits over the pylons that once held up the pier 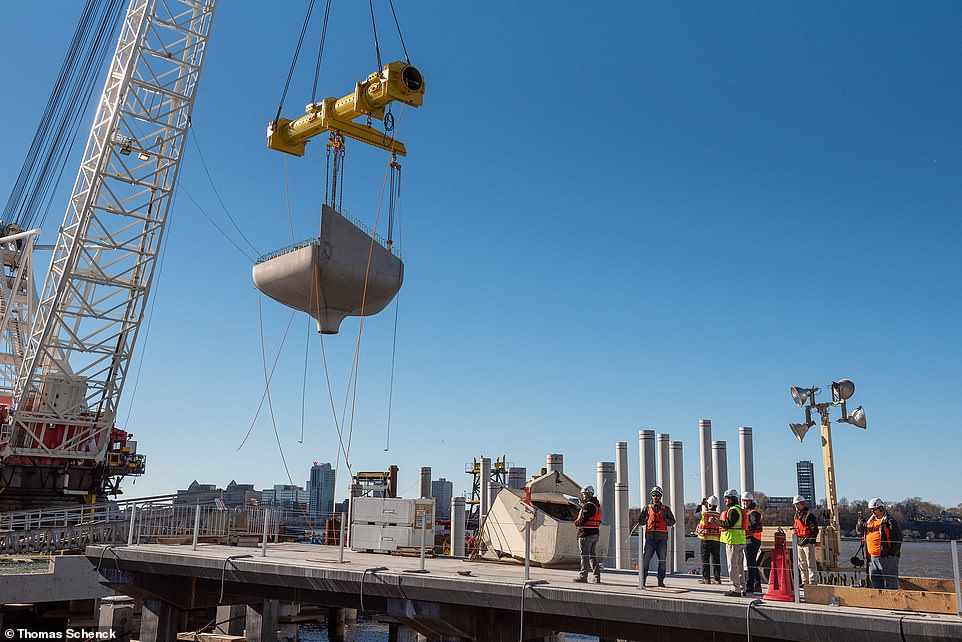 Each tulip’s shape is unique and has a different weight load capacity to hold the soil, lawns, overlooks, and trees 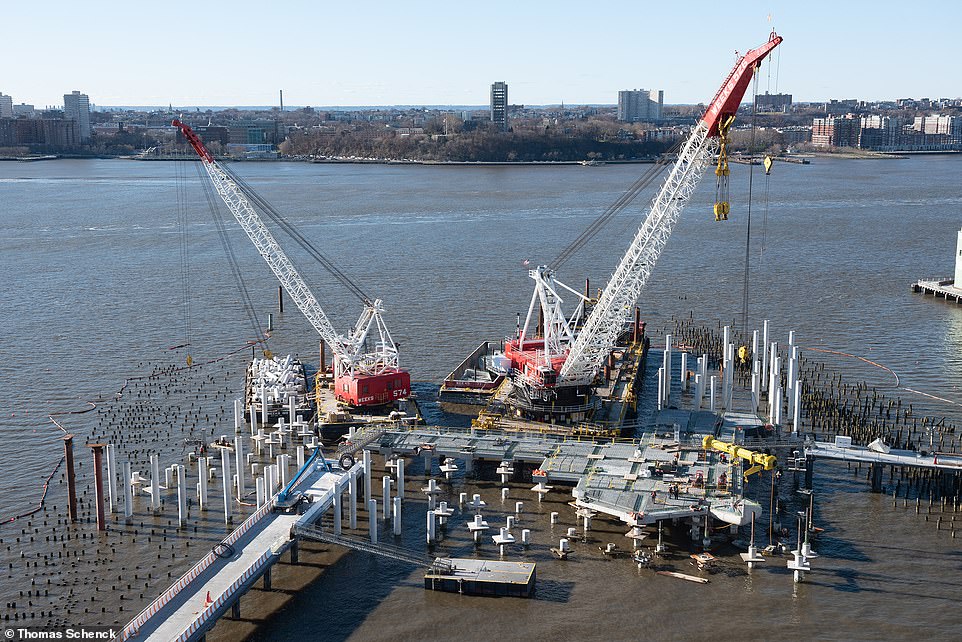 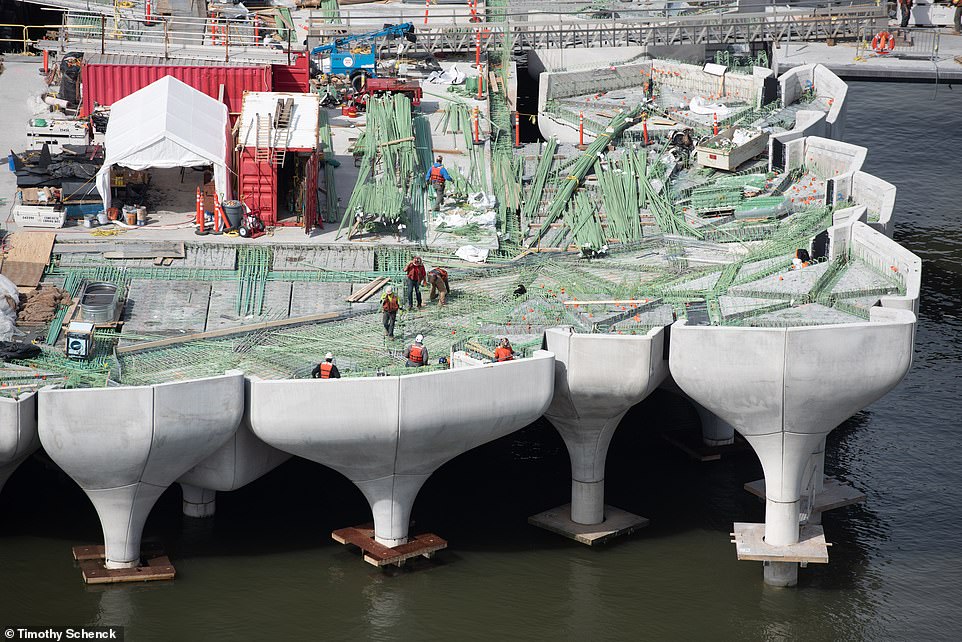 Workers are seen constructing the park, which was in the works for about a decade before its completion 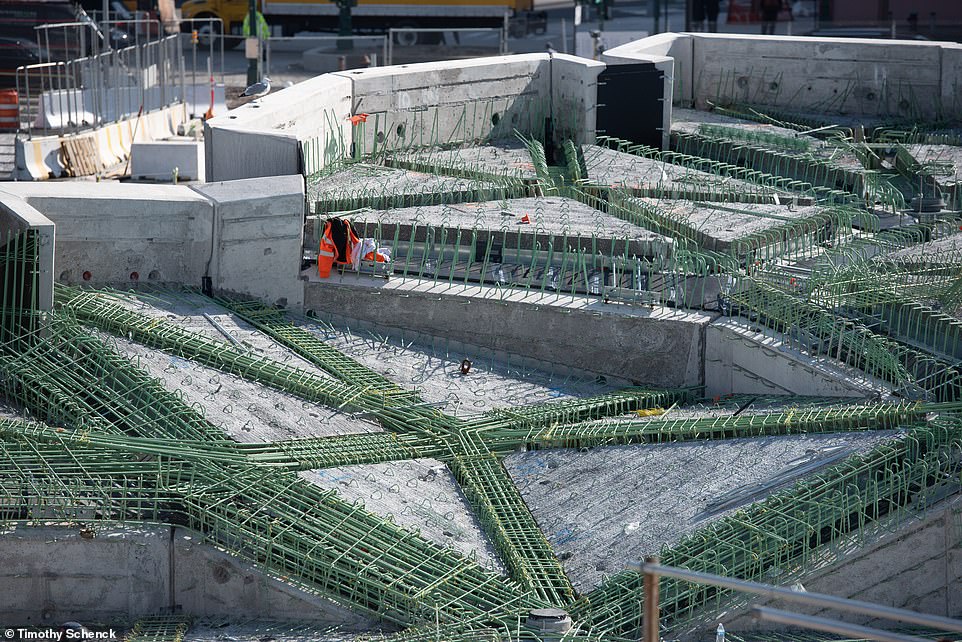 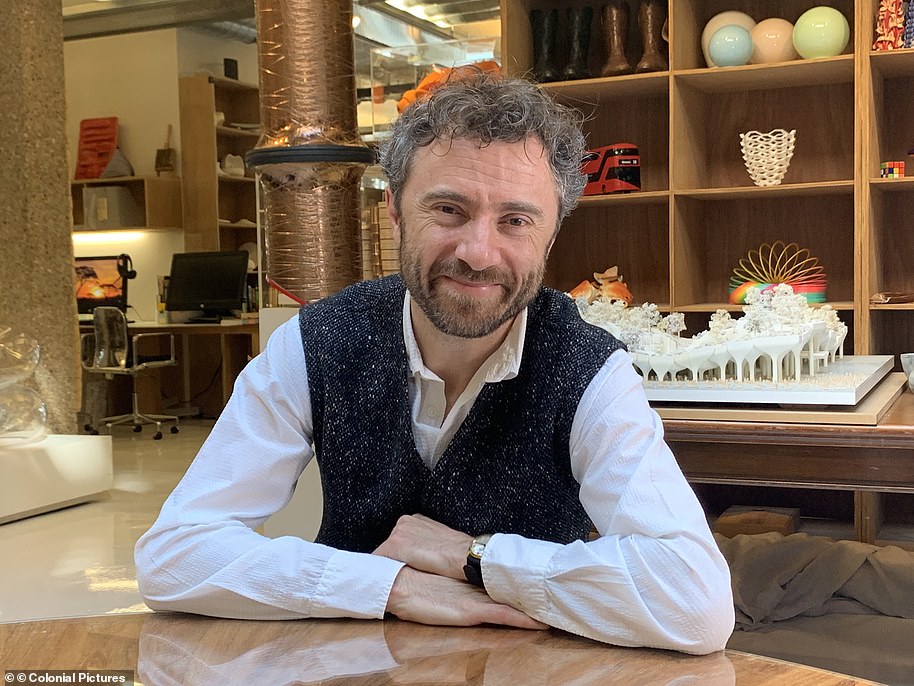 Thomas Heatherwick, 51, is a London-based designer responsible for the Vessel at Hudson Yards in Manhattan and the new Little Island park on the Hudson River.

Heatherwick, who studied three-dimensional design at Manchester Polytechnic and at the Royal College of Art, founded founded Heatherwick Studio in 1994.

The Heatherwick Studio has designed a number of notable buildings around the United Kingdom.

In 2002, the studio designed The Rolling Bridge – a moveable bridge that is intended to unfold across the Grand Union Canal to give access to upcoming water traffic.

The studio completed the futuristic East Beach Café at Littlehampton, West Sussex in 2005. The beach cafe’s unusual form was inspired by the worn contours of weather beaten driftwood and the outer skin was initially allowed to rust to gain texture, color and character before it received an oil-based coating.

In 2010, Heatherwick Studio designed the UK’s Pavilion, ‘Seed Cathedral’, at the Shanghai Expo which housed 60,000 plant seeds at the end of acrylic rods. It was the UK’s most visited tourist attraction during the six-month expo, according to his website.

Heatherwick Studio designed the New Routemaster buses which was manufactured by Wrightbus and entered public service in February 2012. The last of the 1000 new Routemasters were delivered to London in 2018.

The studio also designed the Summer Olympics and Paralympics cauldron for the London 2012 Olympics, which was lit during the opening ceremony on July 27, 2012. However, organizers of the London Olympics later settled out of court with New York design studio Atopia – which claimed that key concept were in proposals they had submitted.

Among the studios several other notable projects is the Vessel – a 15-story structure in the public plaza at the Hudson Yards development. The Vessel is formed by a network of interlocking staircases that visitors were intended to climb up.

However, the Vessel – which opened in March 2019 – was eventually closed to visitors in January after a 21-year-old man jumped to his death in the third suicide in less than a year, The New York Times reported. 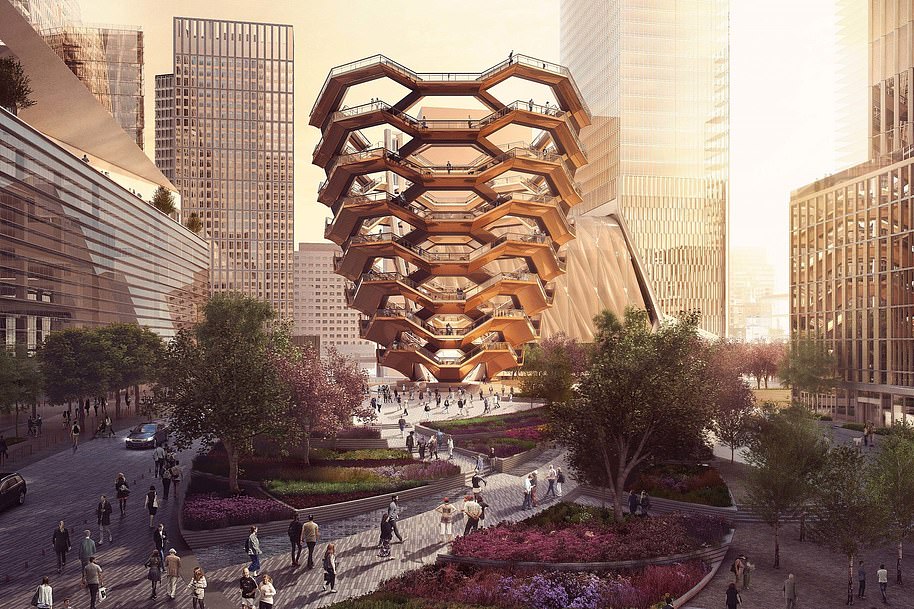