A kiss for the Duchess! Cheeky Dutch basketball player leans in for a peck on the cheek as smiling Meghan presents him with an Invictus Games medal

A cheeky Dutch basketball player kissed Meghan Markle on the final day of the Invictus Games.

The Duke and Duchess of Sussex arrived at the wheelchair basketball final just after the match started at 2.10pm, receiving a standing ovation from the crowd.

After the final whistle, pregnant Meghan went on court to give the Netherlands and USA players their medals and one Dutch player kissed her on the cheek. 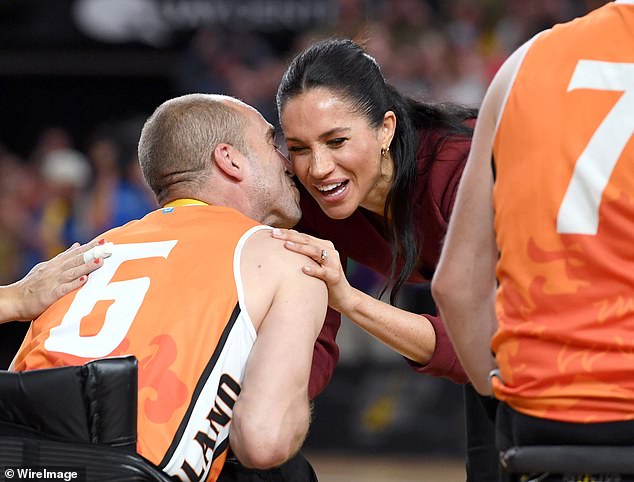 A cheeky Dutch player gave Meghan a kiss on the cheek after the final whistle. According to Royal.uk the correct way for men to greet a member of the royal family is with ‘a neck bow (from the head only). Other people prefer simply to shake hands 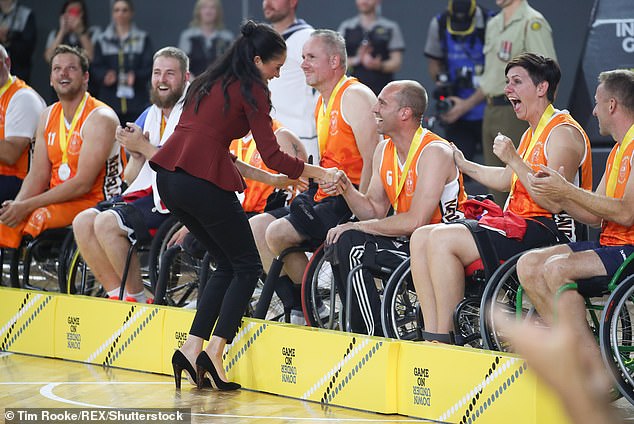 Meghan greets the cheeky Dutch player who kissed her on the cheek. The Duchess shakes his hand before he leans in

The bold move was technically a breach of protocol because the correct way for men to greet a member of the royal family is with a neck bow (from the head only) – but informal Meghan touched the player on the shoulder and smiled as he kissed her.

The Duchess was glowing in a $550 maroon crepe knit wrap top by Australian designer Scanlan Theodore. She wore a Remembrance Day poppy on her left side and paired the top with black tapered trousers and high heels.

Later on Saturday, Meghan addressed the packed closing ceremony of the Invictus Games in her and Harry’s last engagement in Australia before heading to New Zealand on Sunday morning.

In a short and ‘personal’ speech to the 12,000-strong crowd in the Qudos Bank Arena, Meghan thanked organisers and athletes for welcoming her into the ‘Invictus Family.’ 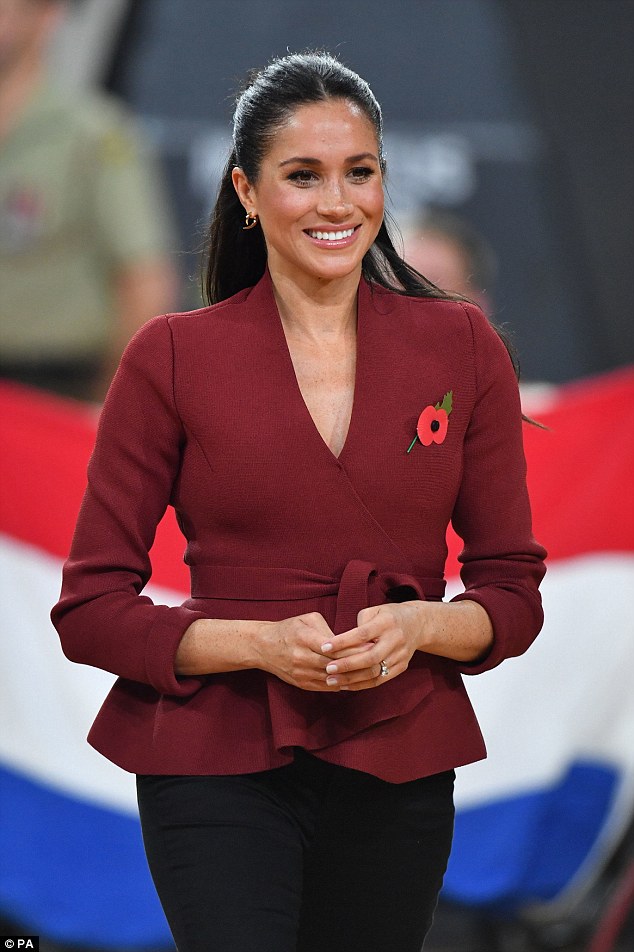 A glowing Meghan Markle watched the Invictus Games wheelchair basketball final with Prince Harry, before presenting the winning American athletes with gold medals on the court

The Duke and Duchess of Sussex arrived the Invictus Games wheelchair basketball final at the Quay centre just after the match started at 2.10pm, receving a standing ovation from the crowd 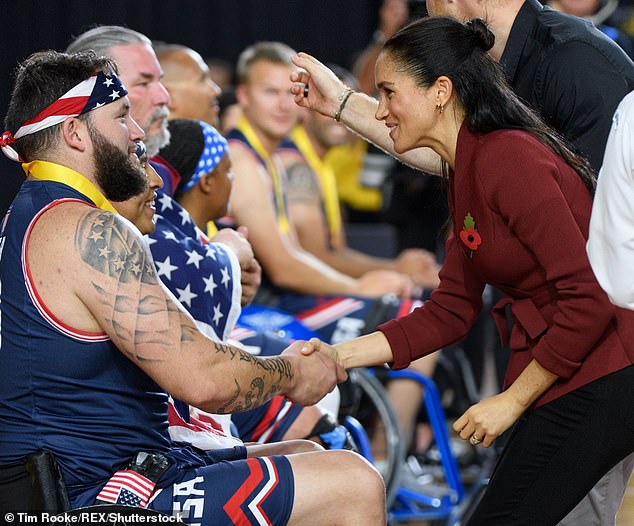 Dozens of fans grabbed their phones and cameras to snap photos of the royal couple. Pictured: Meghan greets US players

She praised the ‘unshakable bond’ between servicemen and women and the ‘camaraderie and close-knit sense of community’ she has experienced at the Games.

The Duchess, 37, was followed by a performance from The Kingdom Choir, the gospel choir that sang at Harry and Meghan’s wedding.

Later Prince Harry took the stage to rapturous applause. He opened his relaxed speech by saying ‘Hi guys’ and told veterans he was ‘humbled and inspired by your determination, your service, and your sense of humour.’

In a moving tribute to competitors, he said the Games was made up of ‘ordinary people doing extraordinary things’ who have ‘exceeded every expectation.’ He added: ‘No challenge is too difficult to overcome.’

The Duke of Sussex, 34, then introduced singer Aloe Blacc to close the ceremony as David Beckham, who was with his sons Romeo and Cruz but without his wife Victoria, cheered from the stands. 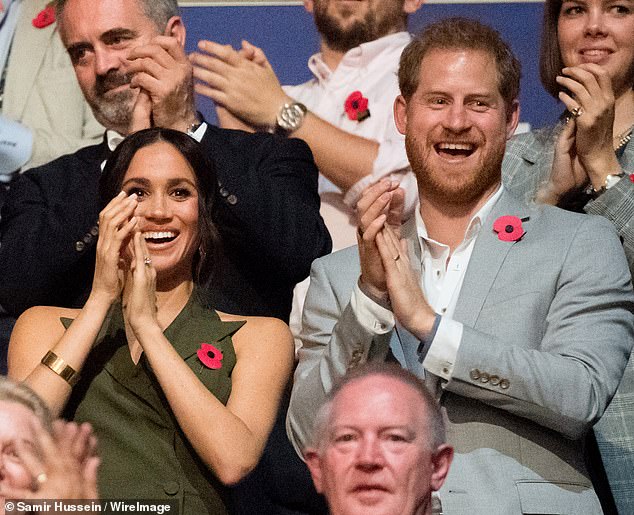 All smiles: Prince Harry and Meghan Markle addressed the packed closing ceremony of the Invictus Games on Saturday night 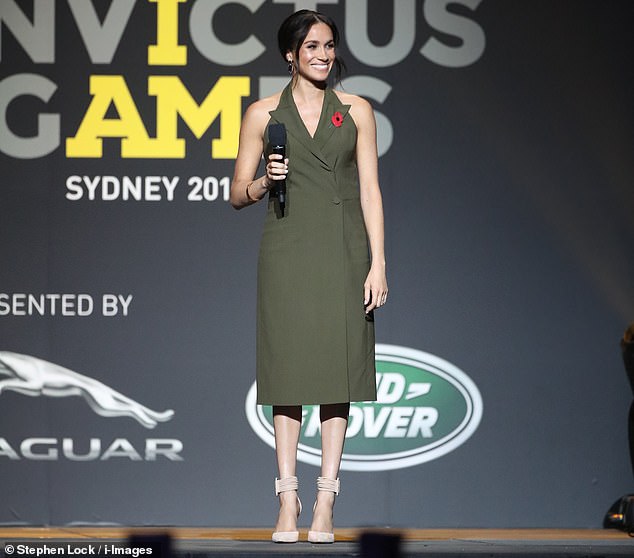 Meghan addressed the buzzing crowd in the Qudos Bank Arena which can hold 21,000. Meghan said: ‘During this year’s games in Sydney, I’ve witnessed the most amazing support networks that surround competitors.’