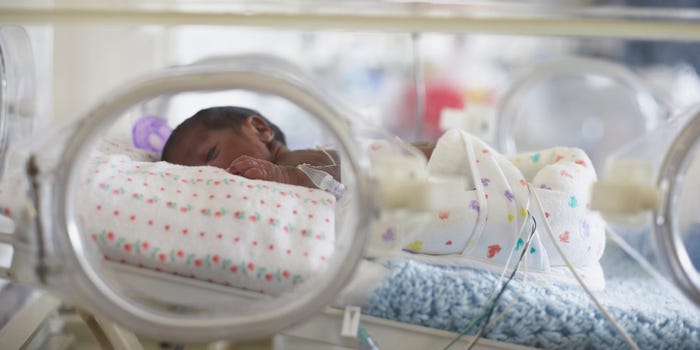 A woman who gave birth prematurely while on a ventilator with COVID-19 has finally brought her baby home, nearly three months after she was born.

Monique Jones, from Ferguson, Missouri, was just 26 weeks pregnant when she was hospitalized with COVID-19 in early September, KMOV reported.

Three weeks later, while Jones was still intubated and on a ventilator, her blood pressure spiked and doctors decided to deliver her baby over fears for Jones' life.

Jones' daughter, Zamyrah, was born when Jones was 29 weeks pregnant. Zamyrah weighed just two pounds and was taken to a neonatal intensive care unit to be cared for by specialists.

Jones woke up days later to learn she had given birth.

"It's a beautiful thing to have her here. I didn't know what was going to happen, who gonna know if they are going to live or die," Jones told KMOV.

Jones, who spent five weeks in the hospital recovering from COVID-19, told KMOV that she was grateful to spend the holidays with her family.

"I feel like I was fighting, not for me but for them," the mother of two said. "Family always meant a lot, and for me to have one of my own, it feels good to have the support that I need."

Jones isn't the first person to give birth while hospitalized with COVID-19.

Another woman, Yanira Soriano gave birth to her son in April while in a medically induced coma at a hospital in New York.

Eleven days later, Soriano, a mother of four, came off the ventilator and met her son for the first time.