A WW2 hero and a reckoning with Japan’s past 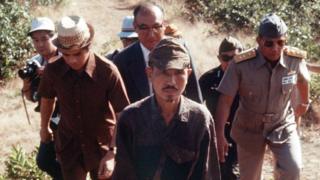 The last Japanese soldier to formally surrender after the country’s defeat in World War Two was Hiroo Onoda.

Lieutenant Onoda finally handed over his sword on March 9th 1974. He had held out in the Philippine jungle for 29 years. In interviews and writings after his return to Japan, Lt Onoda said he had been unable to accept that Japan had capitulated.

To many outsiders, Onoda looked like a fanatic. But in imperial Japan his actions were perfectly logical. Onoda had sworn never to surrender, to die for the emperor. He believed the rest of his countrymen, and women, would do the same.

Of course they hadn’t. On 15 August 1945, Japan’s supreme divine being, Emperor Hirohito, did something no emperor had done before: he went on the radio. Atom bombs had destroyed Hiroshima and Nagasaki. On the day the second bomb was dropped, Joseph Stalin declared war on Japan. Soviet forces were already sweeping across Manchuria. Within weeks they would be landing on the northern island of Hokkaido. Hirohito accepted that surrender to the Americans was his best choice.

Even so, the emperor’s surrender speech nearly didn’t happen. On the morning of 15 August, a group of young officers led their troops in to the imperial palace grounds. They were trying to seize the recording of that speech. They believed the war was far from lost. Japan’s home islands had yet to be invaded. Its vast army in China was still largely undefeated.

The officers were little concerned by mass civilian casualties inflicted by the US bombing of Japan’s cities. Instead they were focused on one thing: the survival of the imperial system. Japan must not sue for peace until the emperor was secured.

The young officers failed to stop the broadcast. But they got their wish – after the surrender the US decided Hirohito would not be tried as a war criminal after all. Instead he would stay on the throne, effectively an American puppet.

It was perhaps a shrewd move by Douglas MacArthur, the US general who ruled over Japan until 1949. MacArthur used the emperor to push his own agenda – to transform conservative Japan in to a modern democracy with an American-style constitution.

The victorious allies put 28 members of Japan’s wartime leadership on trial. Seven, including Prime Minister Hideki Tojo, were hanged. But others were never charged. Among them Prince Yasuhiko Asaka, the emperor’s uncle, and the man who led Japanese troops in the infamous rape of the Chinese capital, Nanjing.

Sparing them was seen by MacArthur as a necessary evil. But his decision has allowed, even encouraged, Japan to avoid a deep reckoning with its past.

Another man who escaped trial was Nobusuke Kishi. Kishi had played a leading role in the occupation of Manchuria and was a close ally of war leader Hideki Tojo. The Americans decided not to charge him. Instead in 1948 Kishi was released. He was banned from politics while the American occupation lasted.

But in 1955, Kishi engineered the formation of a new political force – the Liberal Democratic Party. Soon he would be its leader and Japan’s prime minister. His rehabilitation was complete, and the party he helped create has ruled over Japan for most of the proceeding 65 years.

Nobusuke Kishi’s daughter married the son of another powerful political dynasty – a man named Shintaro Abe. He would go on to become Japan’s foreign minister, and to father a son of his own, named Shinzo.

Shinzo Abe was reputedly close to his grandfather. The old man had a profound influence on young Shinzo’s political views. Like many of his allies on the right, Nobusuke Kishi thought the war-crimes trials he narrowly escaped were victor’s justice. His life-long goal remained the scrapping of the post war pacifist constitution.

In a 1965 speech, Kishi called for Japan’s rearmament as “a means of eradicating completely the consequences of Japan’s defeat and the American occupation”.

When Japan’s critics in China and Korea say the country has never properly apologised for what it did during World War Two, they are wrong. Japan has made repeated apologies. The problem is the other words and actions taken by Japan’s leading politicians. They suggest those apologies are not completely sincere.

In 1997, a new group was established by Japan’s political elite. It is called Nippon Kaigi. It is not a secret society, but many Japanese remain unaware of its existence or its goals.

Those goals are to “rekindle Japanese national pride and identity, based around the Imperial family”, to scrap the pacifist constitution, to institute respect for the national flag, national anthem and national history, and to build up Japan’s military strength.

Another member of Nippon Kaigi, until his death, was Hiroo Onoda. The Japan that Lieutenant Onoda had returned to in the mid-1970s was not to his liking. He believed the post war generation had gone soft. For a time, he moved to Brazil and lived on a cattle ranch. Later he returned to Japan and opened a school to train young Japanese in the skills that had helped him to survive his three decades in the jungle.

When Hiroo Onoda died in 2014 at the age of 91, Prime Minister Abe’s spokesman was effusive in his eulogy. He gave no hint of the futility of his lonely war, or mention of the Philippine villagers he had killed long after Japan’s surrender. Instead he described Hiroo Onoda as a Japanese hero.