London: In Britain's long history, telling false tales to the monarch has often been a bad play. Fabricators could lose favour – or their heads. 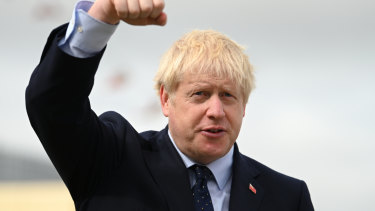 And so Prime Minister Boris Johnson gave the correct answer when asked on Thursday by reporters if he had lied to Queen Elizabeth II about his reasons for wanting to suspend Parliament ahead of his promised "do or die" Brexit at the end of October.

"Absolutely not," said Johnson, speaking with the British press during a visit to a lighthouse tending ship docked in the Thames River.

The embattled prime minister was specifically asked about a Scottish high court opinion on Wednesday that found his request to suspend parliament was "unlawful."

A panel of Scottish judges ruled the Johnson government had been misleading – perhaps, even to the monarch – about its true motivation for the five-week halt. 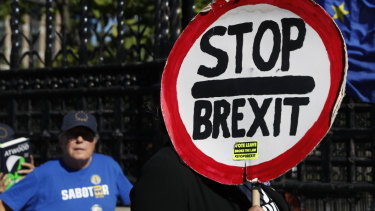 Anti-Brexit protesters demonstrate outside the Houses of Parliament in London.Credit:AP

The Scottish judges said the time-out "had the purpose of stymying Parliament" ahead of the latest deadline for Britain to leave the European Union.

Johnson on Thursday denied this was so. The prime minister said he suspended this Parliament – filled with vexatious rebels, including within his own party – so he could craft a new Conservative Party legislative agenda, full of his promised bold new proposals, to swell the ranks of the police force and to fund care for the infirm and elderly, for example.

But many lawmakers weren't buying it.

Johnson's suspension of Parliament – what's called a prorogation – is the longest in almost a century. And it is happening in the middle of what is arguably Britain's worst peacetime crisis since World War II.

Even Johnson's fellow Tories say the prime minister is playing politics – and trying to outflank moves to block a general election and to stop a no-deal Brexit.

On Thursday Johnson said, "I'm very hopeful that we will get a deal" at a crucial EU summit in late October. "I think we can see the rough area of a landing space, of how you can do it – it will be tough, it will be hard, but I think we can get there," the prime minister said.

Johnson said there would still be plenty of time for lawmakers to argue about Brexit when Parliament resumes on October 14. British lawmakers and European negotiators are less sure about that.

The legal wrangling is far from over.

A high court in Northern Ireland on Thursday dismissed the claim that a no-deal Brexit and the imposition of a hard border on the Irish island would wreck the peace process there. The court said the matter was political and not legal. It didn't consider the question of whether Johnson's suspension Parliament was unlawful.

On Tuesday, the United Kingdom's Supreme Court will wrestle with the question of whether Johnson's decision to suspend Parliament can be scrutinised by any judge, following opposing decisions by two of Britain's high courts, in Scotland and in England.

"If solutions are proposed, they will be debated, all of them – provided they respect the guiding principles of the EU," said European Parliament President David Sassoli. "But, up to now, I can say the UK hasn't proposed any alternatives, anything that's been legally credible and workable."

Frost has suggested nothing would meet the EU red line that the border remain forever open between the Republic of Ireland, which is staying in the European Union, and Northern Ireland, which is departing along with the rest of the United Kingdom, diplomats said, speaking on condition of anonymity to discuss the closed-door talks.

Instead, the diplomats said, Frost has outlined a vision of a Britain that could potentially try to lure businesses by undercutting the EU in a range of areas, including taxes and regulations. That would require a sharp break from current rules – making the Europeans ever more adamant about ironclad guarantees for the Irish border.

"We need a serious partner, not just someone who is screaming slogans, mottos, in the best Trumpian form," said one of the diplomats. "We are really nervous, because we can't see what is coming from London. There are no serious discussions."