An Aer Lingus cabin service manager who claims that the airline’s new uniform perpetuates the ‘trolley-dolly’ image of female cabin crew has failed in her discrimination claim.

At the Workplace Relations Commission, Elizabeth Barry, a long-serving employee with the airline, claimed that the sexualisation of the female Aer Lingus uniform ‘is inappropriate and degrading in a professional environment’.

Ms Barry claimed that she was degraded in her professional duties as the new uniform ‘portrays an outdated and sexualised image of women’.

However, Aer Lingus rejected Ms Barry’s discrimination claim and defended the new uniform, which was introduced in February 2020 and was designed by one of Ireland’s best-known designers, Louise Kennedy.

In his findings, Workplace Relations Commission (WRC) adjudicator Jim Dolan found that Ms Barry was not discriminated against on gender grounds over the uniform and that her complaint was not well-founded.

As part of her claim, Ms Barry claimed that the shirt or blouse worn by female cabin crew is designed with three holes above the left breast area.

Ms Barry stated that this exposes skin just above the left breast and ‘it is humiliating and demeaning for Aer Lingus to enforce an appearance code that reinforces sexist and sexual stereotypes of lack of seriousness and ineffectuality in a workplace that is equally physically demanding of men and women’.

Ms Barry also contended that the less practical appearance and functions of the women’s uniform ‘are unnecessarily uncomfortable, impractical and places them in a subordinate position to their male counterparts who then appear more capable and professional than female cabin crew’.

Ms Barry was represented by barrister Leanora Frawley, who said female crew must wear high heels when in uniform and outside the aircraft, unless they have a medical exemption letter. It was argued that ‘there is a strong association between high heels and female sexuality’. 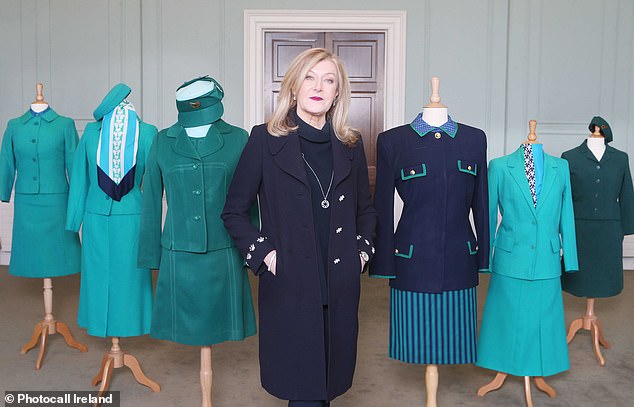 Aer Lingus rejected Ms Barry’s discrimination claim and defended the new uniform, which was introduced in February 2020 and was designed by one of Ireland’s best-known designers, Louise Kennedy (pictured)

Ms Barry also contended that the handbag issued to female cabin crew ‘is decorative and impractical’ and that it is much smaller than the satchel issued to male staff, which ‘again reinforces an outdated stereotype of feminine appearance and sacrifices practicality for that image’.

Ms Barry argued that ‘Aer Lingus still perpetuates the “trolley-dolly” image of female cabin crew with the uniform and accessories’.

Ms Barry has been employed by Aer Lingus since 1994 and has been a member of cabin crew since 1995. She was seeking an order compelling equal treatment in the provision of an equally practical uniform and accessories.

In response, Aer Lingus said Ms Barry was not discriminated against whatsoever, on the basis of her gender or otherwise, with regard to the new uniform.

Aer Lingus stated that there was extensive consultation with staff over the new uniform and ‘the fact that an individual might dislike an element of the design does not render it discriminatory’.

Aer Lingus stated that the uniform provides for a trousers option for female cabin crew and recognises that a cardigan can be worn under the jacket in cold weather, addressing issues raised by Ms Barry about sleeve length. 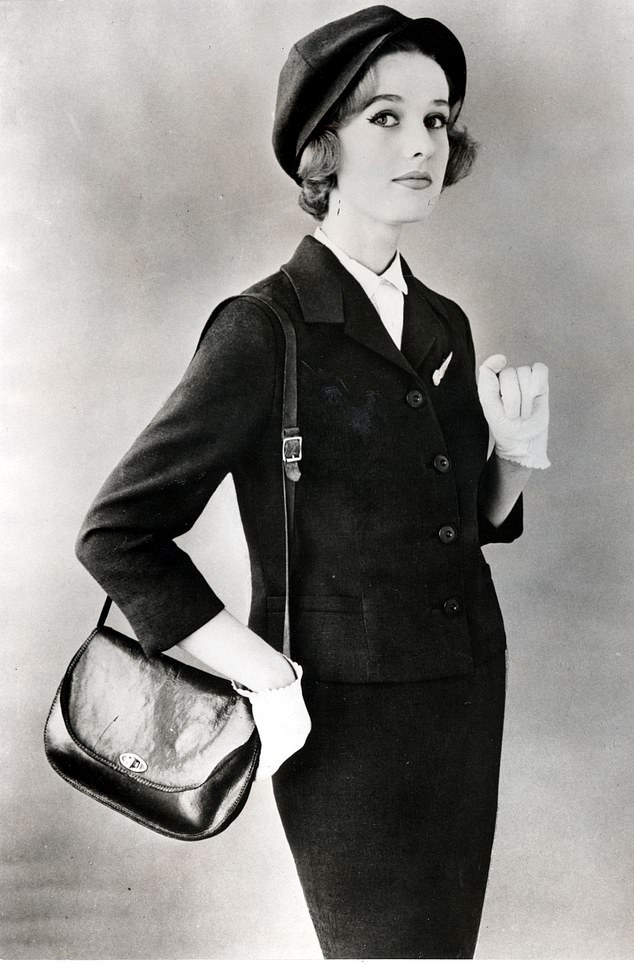 Ms Barry claimed that she was degraded in her professional duties as the new uniform ‘portrays an outdated and sexualised image of women’. Pictured: an Aer Lingus air hostess wearing the 1959 uniform

The airline stated that designer Louise Kennedy spoke to Aer Lingus staff when she was flying with the airline, as she was determined to address areas of concern around comfort and quality, particularly for items such as overcoats and shoes.

The airline said that Ms Kennedy was asked to modernise and refresh the designs of all the crews’ garments while retaining a distinctive look for the airline.

Aer Lingus contended that the matters raised by Ms Barry in relation to the uniform have not been raised internally, whether as an individual grievance or as a collective complaint by Ms Barry and her union colleagues since the new uniform was launched in February of 2020.

Aer Lingus, represented by barrister Tom Mallon, stated that, as a union representative herself, Ms Barry is well-placed to raise any issues of concern applicable to her role as cabin crew through the appropriate forums.

In his findings, Mr Dolan stated that, at hearing, Ms Barry was asked did she accept that the female uniform should be different to the male uniform and her answer was yes.

He found that, having considered the complaint, Ms Barry has not been discriminated against and the complaint is not well-founded.