Two “frightened” Afghan men were pulled from a tunnel by Australian troops and taken away for questioning by war veteran Ben Roberts-Smith and another soldier before one of the men was killed, an elite soldier has told the Federal Court.

Person 40, a serving Special Air Service soldier, gave evidence in Mr Roberts-Smith’s defamation case on Wednesday that he was present during a mission in Afghanistan in 2009, during which two men, including one with a prosthetic leg, were discovered in a compound dubbed Whiskey 108. 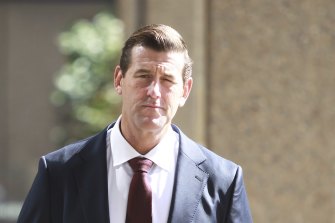 “They came out, obviously very frightened, one had a distinctive limp, that’s the person with the prosthetic leg… he was lifting his trouser, pointing to the prosthetic leg, expecting some sort of sympathy from the troops,” Person 40 told the court.

He said the men were searched and “marched off to another area” for what he assumed was tactical questioning by Mr Roberts-Smith and a second solider, Person 35. He later heard machine gun fire and saw the man with the prosthetic leg had been killed.

Person 40 was called on Wednesday to give evidence for The Age, The Sydney Morning Herald and The Canberra Times in the defamation suit filed against the mastheads by Mr Roberts-Smith.

He told the court that another soldier, dubbed Person 29, told him “out of the blue” last year after he was subpoenaed to give evidence in the trial that “RS knows you’re going to be a witness for this defamation case”.

He said Person 29 went on to say “words to the effect of, ‘you don’t have to be a witness if you … speak to RS’s lawyers, they’ll get you to sign some sort of a piece of paper and you won’t have to act as a witness’.”

Person 40 said he was “very surprised” by the conversation.

Mr Roberts-Smith alleges a series of articles published in 2018 portray him as a war criminal. The newspapers are seeking to rely on a defence of truth and allege Mr Roberts-Smith committed or was involved in six murders of Afghans under the control of Australian troops, when they cannot be killed under the rules of engagement.

Mr Roberts-Smith maintains any killings in Afghanistan were carried out lawfully in the heat of battle, and that no men were discovered in the tunnel at Whiskey 108.

Person 40, whose identity cannot be revealed for national security reasons, told the court that Mr Roberts-Smith was the “lead tactical questioner on the ground” at Whiskey 108, and it was standard procedure for suspected Taliban insurgents to be taken back to the troops’ base at Tarin Kowt.

He said he could not recall whether the men were handcuffed but it was standard for suspected insurgents to be searched and cuffed “so they can’t use their hands in any shape, way or form”.

He said that within about 25 minutes after the men were found he heard “a burst of machine gun fire” from what he believed was a light machine gun, the F89 Para Minimi.

“I walked past the person with the prosthetic leg … He was killed,” Person 40 said. He said no prisoners were brought back to Tarin Kowt.