Attacks by Islamic State Khorasan (ISIS-K) in Afghanistan have become more deadly since the withdrawal of NATO forces, with at least 346 civilians killed by the group since late August.

The insurgents carried out bombings in areas where previously they had little presence. A security expert told Sky News this could be a sign of the group’s growing strength.

Earlier this week, US Pentagon officials suggested ISIS-K intended to carry out attacks against the West and could have the ability to do so within six months.

The group is an affiliate of Islamic State based in South and Central Asia and are ideologically opposed to the Taliban’s nationalist view of Afghanistan, instead seeking to establish an Islamic State across the region.

During and after the US withdrawal, Islamic State Khorasan (ISIS-K) have carried out a suspected 21 attacks in Afghanistan.

The deadliest of these was on 26 August when a suicide bomb at Kabul’s main airport killed 170 civilians and 13 US marines.

Since then, there have been several ISIS-K attacks across Afghanistan, including seven between 18 September – 6 October that killed 18 people.

On 8 October an ISIS-K suicide bomber targeted a Hazara mosque in the northern city of Kunduz, killing at least 43 people.

The picture below shows the damage caused by the bomb inside the mosque. 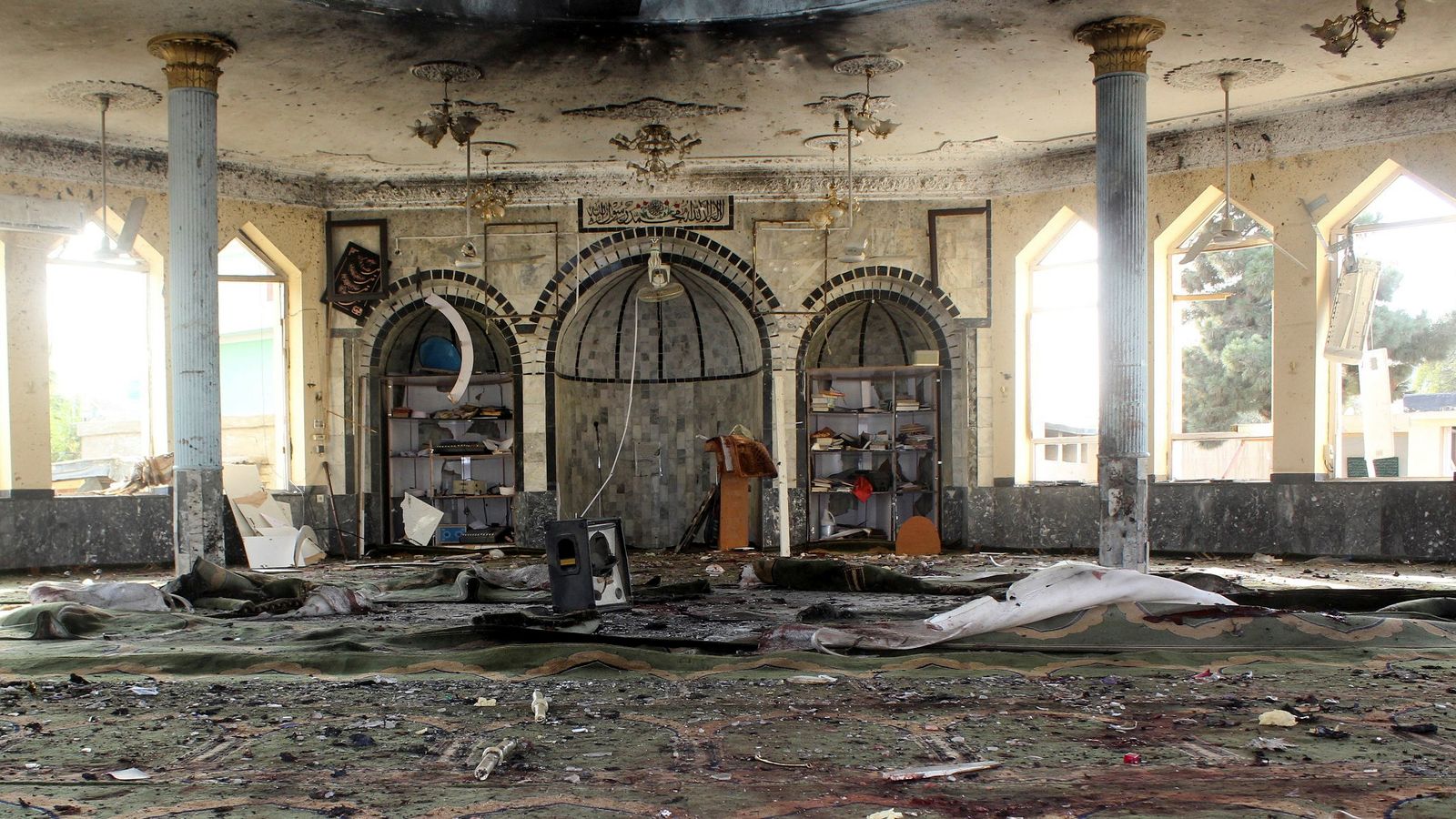 Shortly after, between 8-12 October, five attacks in four days around Jalalabad, an ISIS-K stronghold, targeted both the Taliban and civil society activists.

A few days later on 15 October, CCTV captured two men attacking a Shia mosque in Kandahar, in the south of the country.

At least 47 people were killed in the suicide attack carried out when prayers were underway in the courtyard of the mosque. 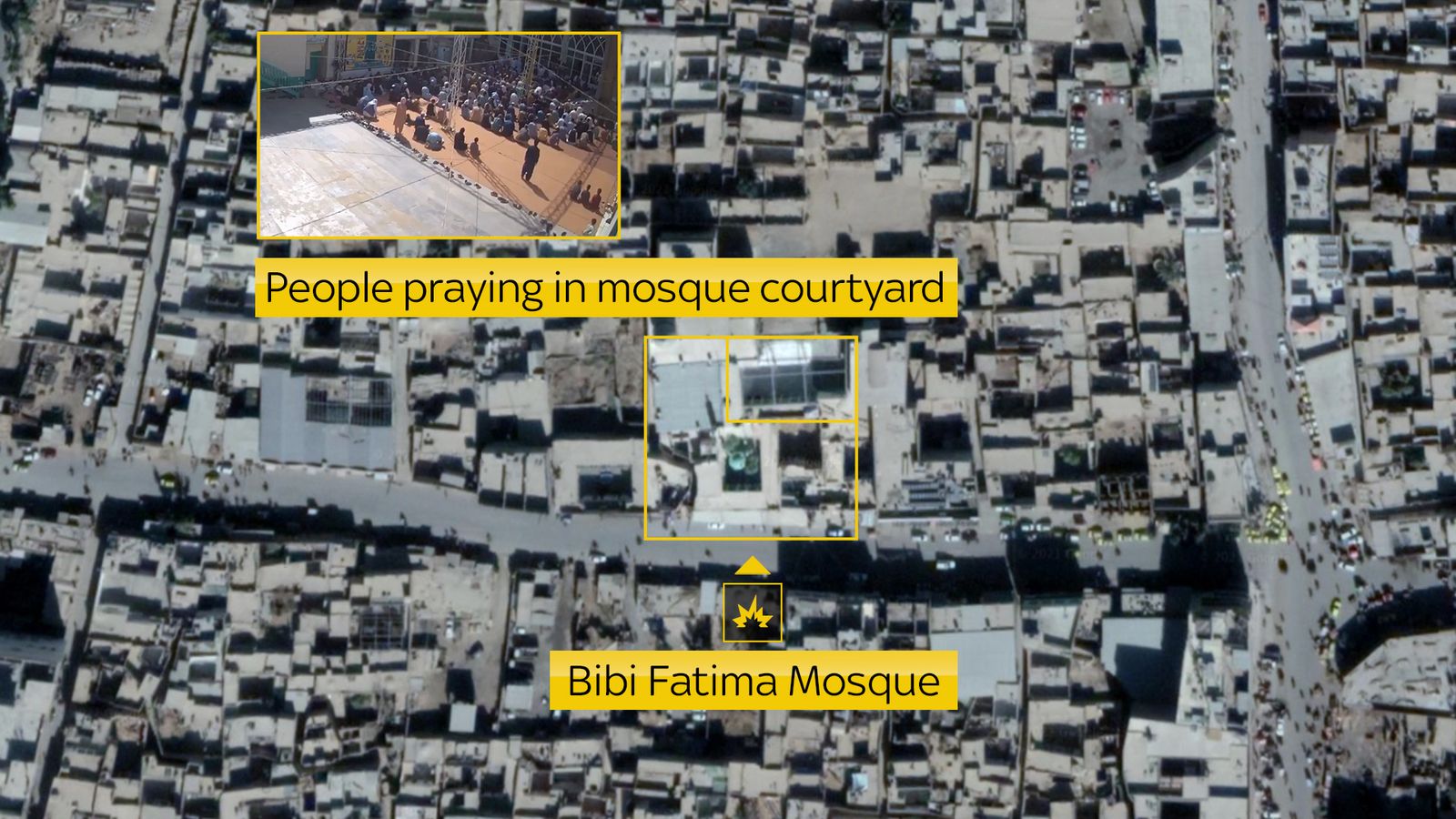 At least five further attacks have occurred since the 15 October mosque attack in Kandahar, meaning around 408 people have been killed by ISIS-K in Afghanistan since August 26, including 346 civilians.

This level of ISIS-K attacks is not unprecedented. In 2018 they were responsible for more deaths globally than all but three other terrorist groups that year. Operations by the Afghan government and NATO forces helped reduce the threat throughout 2019 and 2020.

But now the number of attacks is rising again, with civilian casualties in October 2021 alone higher than in the first nine months of 2020.

Many of these attacks have taken place in the east of the country in Nangarhar province, where ISIS-K has a strong presence.

The Taliban has retaliated, with reports of people being dragged from their homes and killed in Jalalabad, the capital of Nangarhar, for allegedly being ISIS-K members or supporters.

The worsening situation is only exacerbating the existing humanitarian crisis within Afghanistan. The UN has warned that without urgent humanitarian relief the country is on a “countdown to catastrophe”.

It already has one of the largest populations internationally facing acute hunger and it is estimated that up to a million children are at risk of starvation.

What has changed since the withdrawal?

The flurry of attacks highlight the challenge facing the Taliban, who are now expected to provide security across the country despite lacking the manpower, skills, and finance of the previous Afghan government.

Dr Antionio Giustozzi, a senior research fellow at the defence think tank the Royal United Services Institute, said: “ISIS-K’s main enemy has always been the Taliban – there were relatively few incidents between them and the Americans previously.

“What’s different now is the spread of their activity across Afghanistan – Charikar, Kunduz, and Kandahar – these are places ISIS-K didn’t have overt activity before.

“The Islamic State sees the Taliban as being in a weak position right now as they are stretched very thin financially and militarily. Their manpower is taken up controlling the cities, so ISIS-K see now as the right time to strike.”

This week, a US Department of Defence official said that ISIS-K also intends to attack Western countries but that they don’t currently have the means to do so.

It is not just the US that will be monitoring developments with ISIS-K closely.

For the threat to be controlled, the support of other external powers will likely be needed. According to Dr Guistozzi: “The Taliban can only consolidate with support of the regional powers, notably China and Russia. Both of these countries are against the Islamic State – ISIS-K fear Russia in particular and their ruthless airstrikes, like they carried out in Syria.”

The Data and Forensics team is a multi-skilled unit dedicated to providing transparent journalism from Sky News. We gather, analyse and visualise data to tell data-driven stories. We combine traditional reporting skills with advanced analysis of satellite images, social media and other open source information. Through multimedia storytelling we aim to better explain the world while also showing how our journalism is done.