‘Ahead of the curve:’ minister’s claim ridiculed as Britain records highest infections

London: One of Boris Johnson's favourite cabinet ministers has claimed the British government has been "ahead of the curve" in managing the country's coronavirus pandemic.

Home Secretary Priti Patel made the claim before the country hit a record-high number of new daily infections – 36,804. 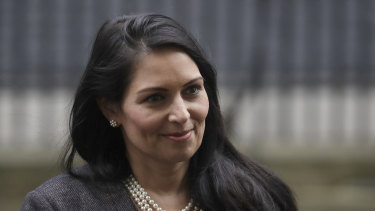 The government is not ruling out an even tougher lockdown in the new year and there is the possibility that students will be told not to return to the classroom.

But Home Secretary Priti Patel defended the government's management as "ahead of the curve."

"The government has consistently throughout this year been ahead of the curve in terms of proactive measures with regards to coronavirus," she told BBC radio.

The opposition's health spokesman Jonathan Ashworth told the Sydney Morning Herald and The Age that Patel's claims were laughable.

"From failing to get PPE to frontline doctors and nurses, debacles over testing and tracing and consistently too slow into lockdown, Boris Johnson has throughout this crisis been left struggling to catch up," Ashworth said.

"For the Home Secretary to suggest the Prime Minister had been ahead of the curve would be laughable if the consequences of his dither hadn’t been so desperately tragic."

Dozens of countries blocked flights from the UK due to a new more infectious strain of COVID-19 which has also prompted huge queues of trucks at the Channel after France closed the border and banned freight crossings. 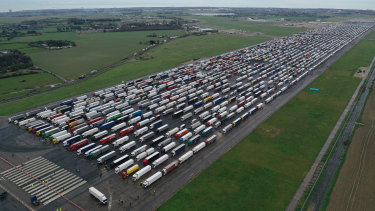 Truckers are parked on the runway at Manston airport as they await permission to cross the English Channel.Credit:Getty

Prime Minister Boris Johnson said he was confident of a breakthrough as early as Tuesday morning after talking to French President Emmanuel Macron but none had materialised 24 hours later.

Small progress was made when France said it would permit entry to EU citizens providing they had a negative test.

Select groups permitted to travel include French and EU citizens, non-citizens with a permanent residence in France, and other people whose travel is deemed essential, including diplomats, health workers, drivers and crew of passenger planes, trains and buses, according to the New York Times.

The impass remains despite the European Commission urging France and other EU member states to lift their travel bans that were imposed on Britain after Johnson cancelled Christmas gatherings for millions of people citing the rapid spread of the new strain across south-east England and London.

"Flight and train bans should be discontinued, given the need to ensure essential travel and avoid supply chain disruptions," the commission said. 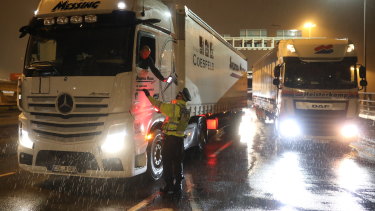 A police officer checks a truck driver’s information as it rains in Dover.Credit:Getty

The commission's recommendation is non-binding but British media reported that the military would be deployed to distribute rapid tests for truck drivers that would enable them to start moving the backlog.

Patel confirmed that the number of trucks waiting at the border in Kent had ballooned to 1500 from the 170 that the government claimed were stacked up on Tuesday morning.

But Ian Wright from the Federal of Small Businesses said the true figure was closer to 4000.

Supermarkets have warned that they could run out of fresh food if the situation is not resolved although said they didn't expect this to affect stocks in the lead up to Christmas.

"Much of this should have been avoided," Wright said, and accused the government of unnecessarily "scaring" the Europeans by announcing the new infectious strain.

Duncan Buchanan from the Road Haulage Association said the disruption to the supply chain was "enormous."

"We will be fine until Christmas but we need to get going and recovering very fast if we're going to keep the shops properly stocked after Christmas," he said.

"It is a worry." Buchanan said there was little threat of drivers transmitting the new virus strain to the continent because they were in a mostly solitary profession.

He said that if the closure of the Port of Dover was a trial run for a No Deal Brexit, it had failed. MPs have been told not to expect to be recalled to Parliament before Christmas meaning the government does not think it will strike a trade deal with the European Union before Friday.

Tory MP Andrew Rosindell who is a member of the UK parliament's Foreign Affairs select committee told this masthead: "The French President is trying to flex his muscle as some sort of pathetic stunt to punish Britain over Brexit."

"It's obvious what Paris is up to, but the reality is he is hurting thousands of hard working people from Britain, France and across Europe and provoking anguish at this most sensitive of times."

"His hostile actions show us once again why being in political union with the continent will never be acceptable."

"The French Ambassador should be summoned at once to explain Mr Macron's actions.”

Britain and the EU have until December 31 to agree a trading arrangement or risk trading on WTO terms.