TIJUANA, Mexico (Reuters) – Thousands of Central American migrants are digging in for the long haul at a filthy, overcrowded sports complex in sight of the United States, while a small number have opted to return home after clashes with border forces dimmed hopes of crossing. 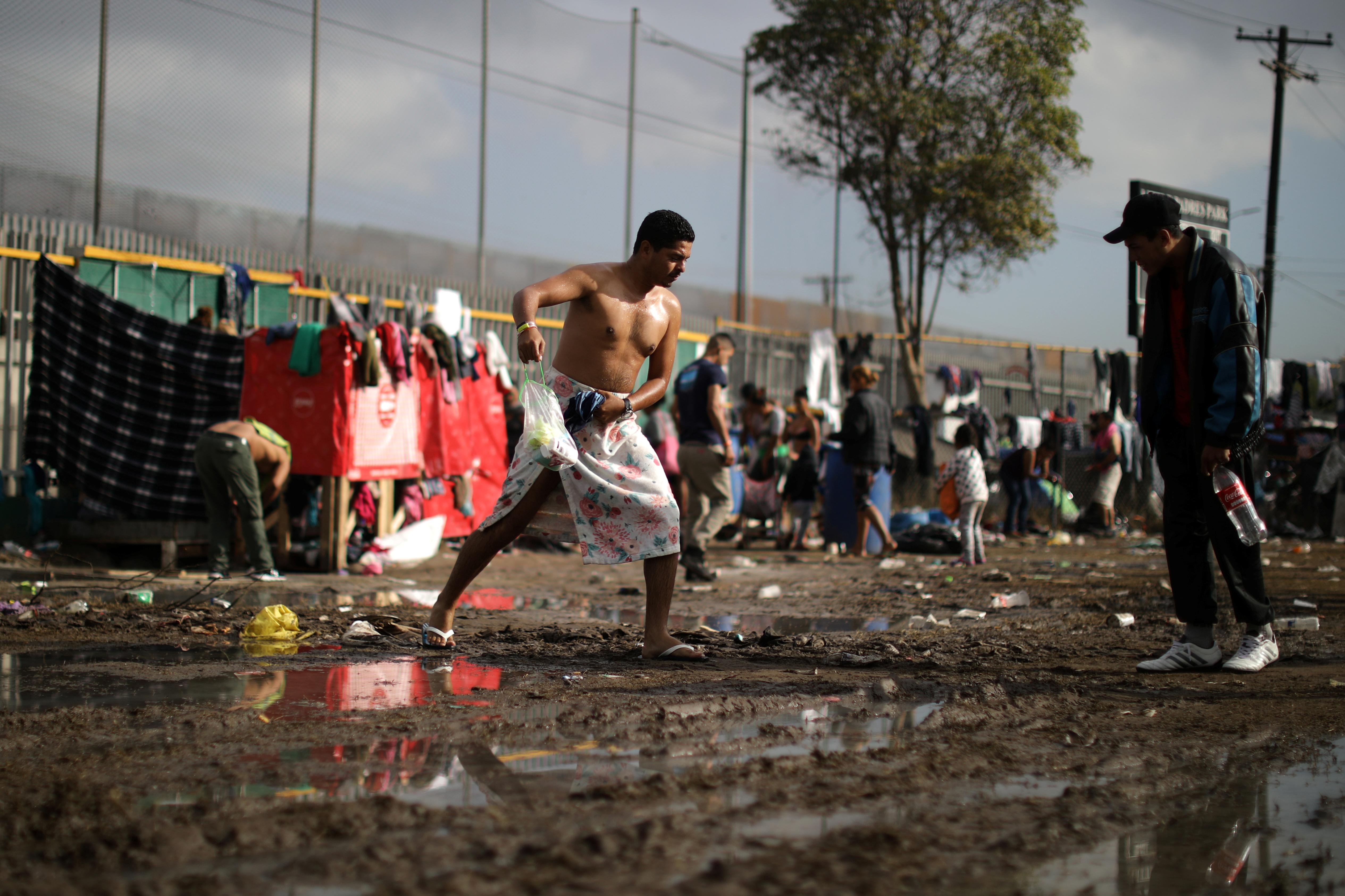 The bedraggled men, women and children of a caravan of mostly Hondurans began cramming into the complex in Tijuana about three weeks ago. They now number more than 6,000 in a space the city government first prepared for a third as many.

As the reality sinks in that those seeking asylum in the United States will likely have to remain in the Mexican border city for months, 350 people have asked authorities to help them travel home.

Jose Luis Tepeu, 22, from Guatemala, was sleeping on cardboard boxes on the ground. He said he would only wait five more days to see if help would come to take him to the United States, or even Canada.

“If they don’t come, I’ll return to my home,” he said, saying that salaries in Mexico were too low for him to stay and send money home to help his family. “You don’t earn well here.”

To seek asylum, migrants must first sign onto a waiting list to see U.S. border officials. The list already had a weeks-long backlog before the caravan came. Adding to uncertainty are U.S.-Mexico talks aimed at keeping migrants in Mexico longer.

On Sunday, U.S. border guards fired tear gas canisters at a smaller group, including women and children, that rushed the border.

The violence seems to have shocked some, and dozens more asked to be sent home voluntarily on Monday, said Rodolfo Olimpo, a migration official in Tijuana.

The overcrowding has also helped illness spread. There have been multiple cases of respiratory illnesses, lice and chicken pox, according to three city officials who declined to be named because they were not authorized to speak to the media.

With too many to fit into shelters, the migrants, who had traveled about 3,000 miles (4,800 km) since mid-October, were ushered into the complex to wait until U.S. and Mexican authorities settled on how to deal with them.

Many have been living in tents, while others are in shelters made from trash bags or patches of cold floor walled off with backpacks and blankets, enduring the harsh elements and lack of privacy as they had learned to do on each leg of their near daily 30-mile treks from northern Honduras.

But despite the difficult conditions, many seemed determined to wait in Mexico for their chance to make their case to the United States, with more than 600 applying for permits to work in Mexico just on Tuesday, according to the foreign ministry.

“It cost me a lot to walk almost 15 to 20 hours a day, and to go back now: no,” said Anabell Pineda, 26, who has pitched a tent in the stadium beside a neat pile of bags and rolled-up blankets.

Pineda, who had traveled for almost a month from the violent Honduran city of San Pedro Sula with her six-year-old son, said she arrived in Tijuana 13 days earlier, feeling unwell.

When she learned it would be nearly impossible to cross to the United States quickly under current U.S. policies, she resolved to be patient, and get a Mexican work permit meanwhile.

At the complex, men washed using buckets in a shower area beside reeking portable toilets and giant mud puddles. Women, wary of uninvited gazes, bathed with clothes on.

Sniffing through a blocked nose, Katherin Arita, a 17-year-old Honduran, said she has been losing weight since leaving her homeland a month and a half ago. She expected she would have to wait up to four months to try to enter the United States.

Inside a gymnasium where the caravan’s first arrivals had set up neat rows of thin mattresses, a city official said there had been a chicken pox outbreak. 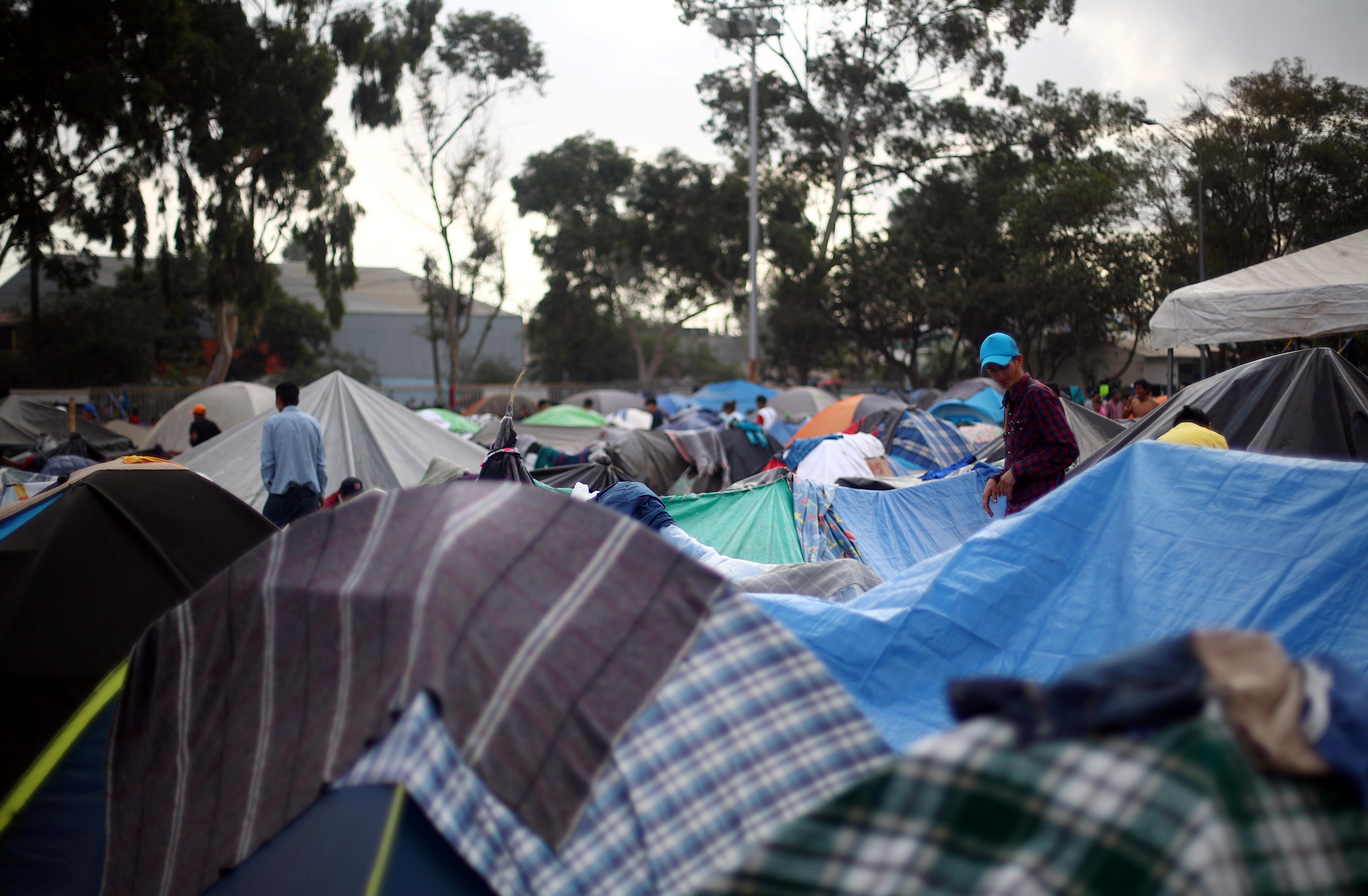 U.S. President Donald Trump threatened this week to “permanently” close the U.S.-Mexican border if Mexico does not deport the Central Americans gathered in Tijuana.

Mexican Foreign Minister Luis Videgaray, who leaves office this weekend, said in response that Central American migrants were welcome to stay in Mexico.

But he said the migrants have a right to request U.S. asylum, and Mexico has repeatedly refused U.S. requests to force them to seek refuge in Mexico instead.