Paris: Air France-KLM flew a biofuel-powered Airbus A350 from Paris to Montreal, demonstrating the airline’s readiness to adopt low-emissions fuel despite deep industry divisions over the pace of its adoption.

Air France flight 342 took off from Charles de Gaulle airport on Tuesday (Wednesday AEST) with a 16 per cent mix of sustainable aviation fuel in its fuel tanks, produced in France by Total from used cooking oil. 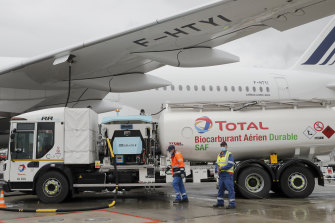 The flight signalled a “shared ambition to decarbonise air transportation and to develop a SAF supply chain in France”, the companies said in a joint statement with airport operator ADP .

Jet fuel produced from biomass or synthetically from renewable power has the potential to slash carbon emissions, albeit at a heavy cost by comparison to the price of kerosene.

Starting next year, flights departing from France will be required to use 1 per cent sustainable aviation fuel, or SAF, ahead of European Union goals to reach 2 per cent by 2025 and 5 per cent by 2030 under the bloc’s Green Deal policy.

But traditional network airlines have sought to exempt long-haul flights, arguing that a Europe-only SAF requirement could expose them to unfair foreign competition. 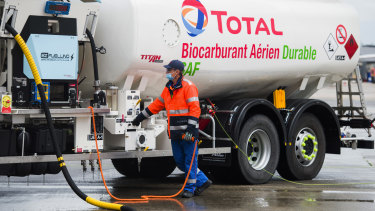 Jet fuel produced from biomass or synthetically from renewable power has the potential to slash carbon emissions.Credit:Bloomberg

That has drawn an angry response from low-cost airlines including Ryanair, Wizz Air and easyJet , which wrote to the EU in March to demand that the rules apply to all flights originating in Europe.

“We have to be on a level playing field,” Smith said. “We can’t have a situation where airlines that are based outside Europe can undercut us, (and) that is a real concern.”

Any such exemption would have “no logic”, the group’s aviation director Andrew Murphy said.

Green fuel used for the Paris-Montreal flight was produced by Total at its Oudalle plant near Le Havre as well as La Mede, a refinery in southern France converted to biofuels in 2019.