Al-Shabaab jihadis have launched twin attacks on US and Italian troops in Somalia.

A suicide bomber in a car blew himself up at the gates to a US drone base at Belidogle, in the south of the country, on Monday before gunmen swarmed inside.

Meanwhile a suicide bomber attempted to blow up a convoy of European Union peacekeepers in the capital Mogadishu. 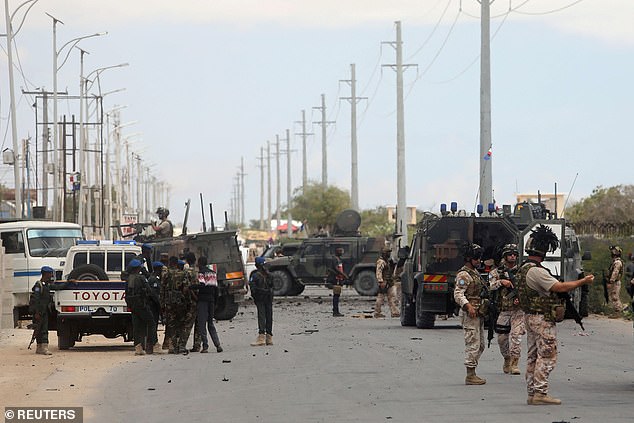 A suicide bomber in a car blew himself up outside the Belidogle airstrip in southern Somalia, which is used as a US drone base, on Monday before gunmen ran inside 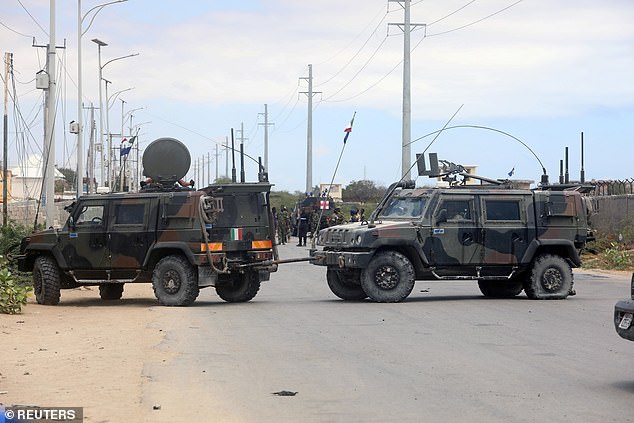 Somali state broadcaster SNTV the attack at the airstrip ended around 10 minutes after it started, with no casualties on the US side.

The airstrip is used to launch drone strikes against jihadi targets, and also serves as a training base for Somalia’s special forces.

Meanwhile the bomb in the capital missed the Italian soldiers but injured a group a civilians nearby.

It is not clear how many people were injured, or how badly.

The targets of the attack were two vehicles involved in a training mission, according to Italian outlet ANSA.

The vehicles had just left the green ‘safe zone’ and were en-route to the Somali defence ministry when they were attacked. 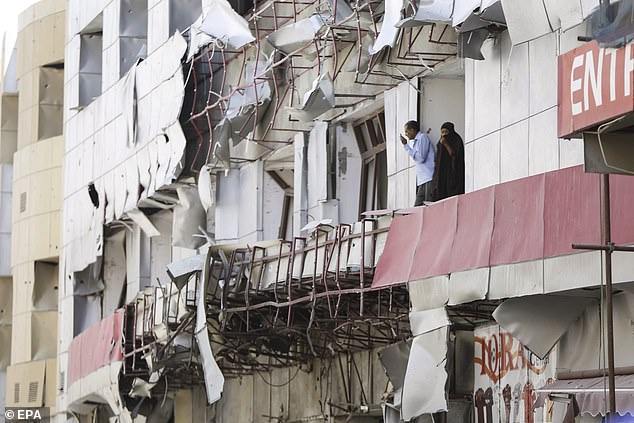 Meanwhile a suicide bombing in the capital Mogadishu targeted a convoy of Italian peacekeepers but missed and killed nearby civilians instead (damage, pictured)

Al-Shabaab, which translates to ‘The Youth’, serves as Al-Qaieda’s branch in eastern Africa and has been operating in the country since the 1990s.

The group controls large portions of the south of the country and border areas with Kenya and Ethiopia where it enforces fundamentalist Islam, including Sharia law.

Its stated goal is to establish a jihadi state that encompasses the whole of the Horn of Africa, including Kenya, Ethiopia, and Djibouti.

The group’s last major attack was on July 24 when mayor Abdirahman Omar Osman was fatally wounded by a female suicide bomber who blew herself up outside his office.

Mr Osman, who spent 17 years in the UK but returned to the country of his birth to help rebuild, was airlifted to Qatar for treatment but died a week later.