The Australian Open on Sunday night consigned the biggest celebrity immigration scandal since Barnaby Joyce’s take down of Pistol and Boo to ancient history by the time Spaniard Rafael Nadal took to the Rod Laver arena to fight for his 21st grand slam title against Russian firebrand and bitter rival Daniil Medvedev.

The global storm that erupted after Novak Djokovic’s immigration exemption disaster might have been on a par with then immigration minister Joyce deporting Johnny Depp and Amber Heard’s beloved Yorkshire terriers, but the casualties were few and far between by the time the men’s final rolled around. 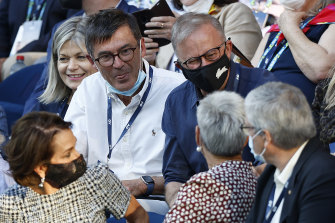 True, Prime Minister Scott Morrison declined to attend to the Australian Open men’s final on Sunday night, too busy hugging a koala in the Liberal Party’s happy place of Queensland.

And Sports Minister Richard Colbeck, who is also the scandal-ridden Aged Care Minister, was invited to attend but declined.

Thus, with the most senior pollie in the country out of view, it was only natural that wannabe prime minister Anthony Albanese set out for maximum exposure. The Opposition Leader attended the Women’s Finals on Saturday night as a guest of Nine – the owner of this masthead – and then again on Sunday evening to watch the second most intense rivalry in the country. 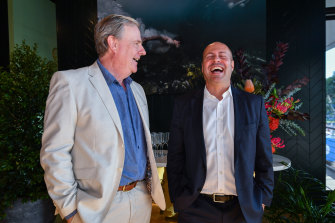 Current Victorian Premier Daniel Andrews did not attend the final. In fact the number of matches he attended this year equalled the number of sets taken off women’s champ Ash Barty: zero. Victorian Sports Minister Martin Pakula did make an appearance.

Inside the Nine suite, company chairman Peter Costello looking sharp (at least that’s what we told him) in a taupe linen suit with contrasting navy linen shirt was happy to give his successor Josh Frydenberg some feedback, moving Frydenberg to jovially point out that Costello never had to deal with a pandemic. 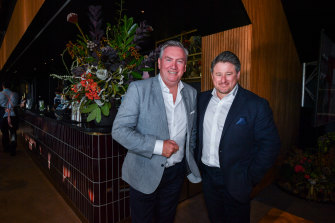 Frydenberg and wife Amie Saunders were enjoying the lounge music so much that they went to book the DJ for an upcoming birthday party.

In the Penfolds Restaurant, Sydney pub baron Justin Hemmes, 49, relaxed on the terrace with a posse that included girlfriend Madeline Holtznagel, 26, as the Sydney celebrity hotelier prepares to further his assault on Melbourne hotels in 2022. 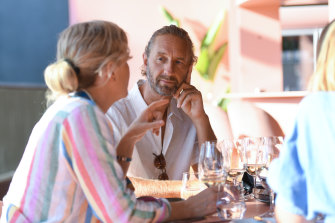 Also spotted in the sponsor’s hospitality zone, Telstra chief executive Andy Penn held court at a table of eight senior executives, while nearby actor Rachel Griffith shot the breeze at a table of six.

Benoit Collard, vice president of Piper-Heidsieck, flew in from France to preside at the Parisian cafe style Piper-Heidsieck champagne bar, where the Indian hospitality staff looked in awe when cricket super star David Warner walked in with wife Candice. Might we have a photo, they politely requested? Of course!

Penny Fowler, the Herald and Weekly Times chair and niece of Rupert Murdoch was sitting next to Sky News chief executive Paul Whittaker. 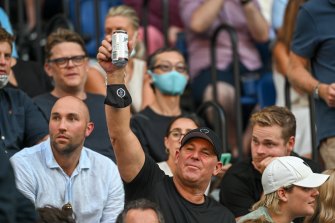 And just to remind us why we were all here, front and centre were a trio of tennis legends, Rod Laver, Neale Fraser and Judy Dalton.