Analysts say the country’s decision-makers are looking to exploit the president’s popularity to maintain the status quo. 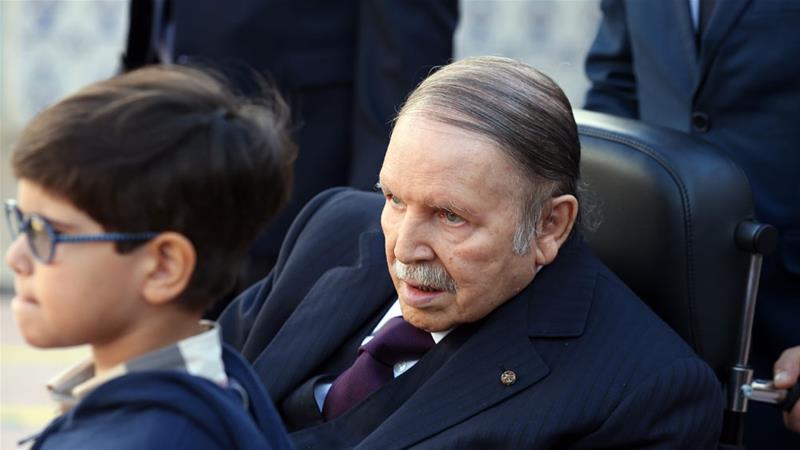 Members of Algeria’s ruling party have called on President Abdelaziz Bouteflika to run for a fifth consecutive term, according to local media reports.

Speaking at a party meeting on Saturday, the National Liberation Front’s (or FLN by its French acronym) secretary-general, Djamel Ould Abbes, confirmed earlier reports about party and government officials pushing for the ailing president’s re-election in next year’s vote.

“The executives and elected representatives of the FLN call on the president to continue his mission, started in 1999 as head of the country … and hope that he will respond favorably to our request, but it is up to him and him alone to decide whether to accept or decline our invitation,” Ould Abbes was quoted as saying by the French language newspaper l’Expression.

The minister of foreign affairs, Abdelkader Messahel, who also spoke at the gathering expressed support for the bid as he credited the return of peace and stability to Algeria following a decade-long civil war to Bouteflika’s “wise” leadership.

“Under Bouteflika’s presidency, Algeria, which experienced a situation bordering civil war in 1997, became one of the most stable and secure countries thanks to the Civil Concord and the Charter for Peace and National Reconciliation.”

Ould Abbas said the party would soon release a comprehensive document detailing the president’s achievement since assuming power in 1999.

Analysts say the announcement was a long time coming. They argue that while the octogenarian’s continued presence in the political scene comes as no surprise, calls by the party’s executives for him to run for office provide a rare glimpse into the country’s complex power structure.

“Once Bouteflika confirms his intention to run for a fifth term, everyone else will have to fall in line and that will be the end of the speculation about succession,” Riccardo Fabiani, a political analyst who focuses on North Africa, told Al Jazeera.

“It is clear that, in the absence of consensus around the succession to Bouteflika, the various regime factions have opted for continuity to avoid divisions at a delicate time (economic reforms, social unrest…).”

Yousef Bouandel, an academic and expert on Algerian politics, likewise believes that the president’s popularity (in no small part the product of his successful bid to end the civil war), could be used by the real power brokers to maintain the status quo.

“Bouteflika has been absent from the political scene for at least six years. We haven’t heard from him, he hasn’t spoken to the Algerian people since May 2012. He did not conduct one single interview in the last presidential elections in 2014.”

“This lends credibility to the idea that Bouteflika is here simply to respond to the popular demand of the people with the decisions obviously being made elsewhere,” Bouandel said.

With a support base estimated at 700,000 members, the party has struggled to stay relevant in recent years as it adopts a more isolationist policy and is seemingly preoccupied with more pressing economic challenges.

“A fifth term for Bouteflika is, therefore, the easiest option, but at the same time, it is also a way to postpone further what will be at some point inevitable – choosing a successor to Bouteflika and injecting new blood in an increasingly sclerotic and ineffective political system,” Fabiani said.