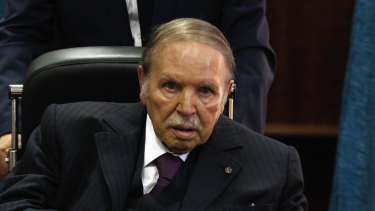 The news came shortly after the Algerian Defense Ministry aggressively called on Tuesday for Bouteflika to quit "immediately." The ministry, which controls the army, had said "there is no more time to waste" after six weeks of nationwide protests against the chief of state and his inner circle.

The 82-year-old Bouteflika has been in office for 20 years. He suffered a stroke in 2013 and has been rarely seen in public since then.

On Monday, he said he would resign by the end of his fourth term on April 28, capitulating to growing calls for his resignation.

Protests calling for Bouteflika to resign have intensified since February. He first was elected in 1999 and planned to seek a fifth term next month.

He postponed the election in response to the protests and said he would not run for re-election.