Amber Rudd has warned Downing Street that dozens of ministers could quit if they are blocked from backing moves to delay Brexit, it emerged last night.

The Work and Pensions Secretary is said to have argued that as many as 40 ministers want to vote for a rebel amendment designed to postpone Britain’s departure date and prevent a no-deal scenario.

With the time to agree a deal running out, her comments will be seen as a sign of growing concerns among senior ministers that Britain could end up leaving without a deal.

A cross-party group of MPs led by Labour’s Yvette Cooper and Tory former minister Nick Boles has drawn up plans to defer Article 50 – the EU process that enables a country to leave the bloc – by nine months if Theresa May has not secured an agreement by the end of February. The proposal is expected to come before Parliament on Monday. 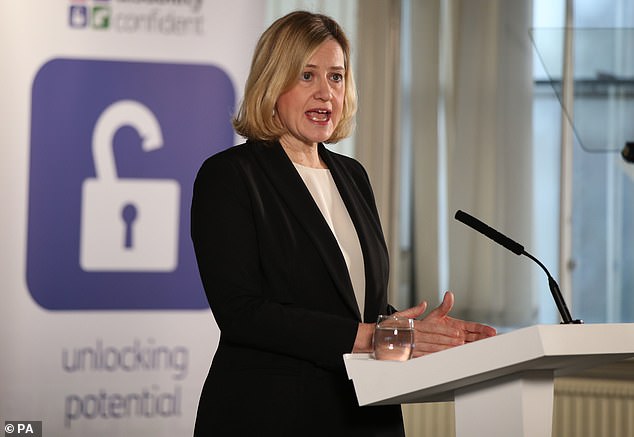 Miss Rudd has reportedly told No 10 that Tory MPs should be given a free vote on the issue to declare their views on what should happen next.

In a statement to the Commons yesterday, however, the Prime Minister made clear her opposition to any mechanism that rules out No Deal.

Mrs May described it as a ‘course of action we should take, or which this House should support’.

Last night, one supporter of the Cooper plan said there was ‘growing optimism’ that the amendment would get through with support from Labour.

Jeremy Corbyn himself appeared to hint that his party could back the plan.

The Labour leader told the Commons: ‘As we have said consistently from the beginning, we will back amendments that seek to rule out the disaster of No Deal.’

But sources close to Mr Corbyn said the party had not decided to support the Cooper amendment yet.

Jenny Chapman, one of the party’s Brexit team, described the proposal as ‘quite promising’, adding: ‘It is absolutely something we are seriously considering.’ The Cooper plan would set Mrs May a deadline of February 26 to get parliamentary approval for her Withdrawal Agreement, which was voted down by a historic majority last week.

If no agreement had passed by then, MPs would be able to seize control of Commons business and change the law to mandate Mrs May to extend Article 50. However, this would require the approval of the EU. The measure could also be amended, meaning MPs could extend Article 50 for longer, further delaying Britain’s departure from the EU. 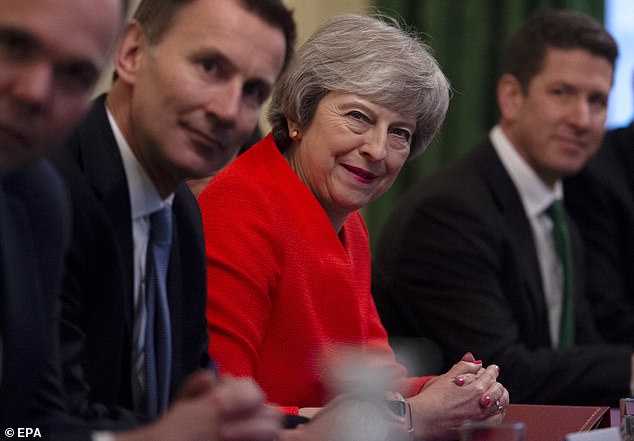 Miss Cooper said it would stop a ‘chaotic and damaging No Deal’. She added: ‘The Government cannot just push the country into No Deal because they have run out of time.’ Separately, former attorney general Dominic Grieve has drawn up plans to allow MPs to force a debate without a majority of MPs.

Instead, just 300 out of a Parliament of 650, from at least five parties and including ten Tories, would be able to force a motion on to the floor of the House.

It would then be debated as the first item of Commons business the next day.

The Tory MP, who wants a second referendum, insisted the move was ‘wholly in keeping with our democratic traditions’.

He told the BBC it was ‘not some sort of constitutional upheaval or revolution at all’, adding: ‘It’s a tweak of the standing orders to ensure the House of Commons has that space to express its views.’

Brexiteer Jacob Rees-Mogg said yesterday that former Ukip leader Nigel Farage should eventually be welcomed back to the Tories with other ‘reasonable’ former Ukip members. But Mr Farage said: ‘I don’t think I would want to join the Tory Remainer establishment – not that they’d have me.’