The operator of a ship carrying tonnes of Australian coal stranded off the coast of China is diverting the vessel to Japan in a high stakes dash that will see 18 sailors relieved after a six-month diplomatic stalemate.

The move from the ship’s operator, the Mediterranean Shipping Company, follows months of frustration and deteriorating conditions on board the vessel, where Indian sailors have become pawns in a $20 billion trade dispute between China and Australia. The ship is one of dozens held up in Bohai Bay carrying up to $700 million in Australian coal. 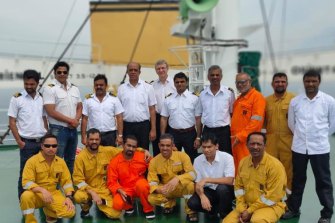 The Anastasia crew in December.

MSC, which maintains the vessel and organises its crew, said it was was left with no option but to advise the master of Anastasia to make a short hop to Japan on February 4 after it exhausted all possible options for a crew change including through Indian and Chinese authorities.

The company said already grave concerns for the safety and well-being of the seafarers intensified in the past week and it had taken the decision to avoid “a humanitarian crisis onboard”.

“MSC prioritised the Japanese option as the quickest and most efficient way to provide the necessary relief for the crew and to enable the ship to subsequently continue in service as it may be required by the charterers,” the Swiss company said in a statement.

“As a result of MSC’s action, 18 seafarers, mostly of Indian nationality, will disembark from Anastasia on 10 February 2021 and will undergo thorough medical examinations before being repatriated by MSC to reunite with their families as soon as possible.”

The company had warned in December that ordering the master to divert to another port could see the ship and its crew detained by authorities acting for the charterers of the cargo.

“MSC, as the technical operator of the ship, cannot simply order the master to deviate to a port for a crew change, as the vessel could be arrested as a result,” the company said.

“This would only perpetuate the problem and may result in the crew remaining onboard for even longer than necessary.”

Almost three months later, with options running out for sailors on board, medications dwindling and increasingly desperate families demanding the sailors return home, MSC was forced to take the high-risk action on Monday.

On January 18 Anastasia crew member Gaurav Singh said the company responsible for the Australian coal, HK Holdings, had threatened to take MSC to court and arrest the ship and crew after it requested a crew change. 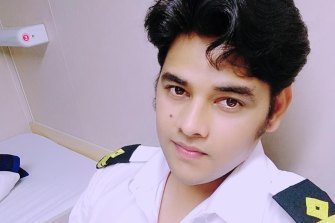 Gaurav Singh, an officer on the ship, Anastasia. Credit:

“The situation onboard is getting worse with each passing day. Crew is in bad shape. Everybody is scared and in extreme anger,” he told The Sydney Morning Herald and The Age. “The value of the cargo is more precious than the lives of the human being.”

The restrictions were the culmination of more than a year of diplomatic and economic hostility after Australia banned Huawei from the 5G network, called for an independent inquiry into the coronavirus and criticised China’s human rights record in Hong Kong and Xinjiang.

Bloomberg reported on Monday that Chinese authorities planned to allow some stranded Australian coal shipments to unload despite the ongoing restrictions on more than $4 billion worth of coal imports. The move was reported as a way of showing goodwill to the countries of seafarers on board the vessels rather than any thawing of trade tensions with Australia.

Chinese Foreign Ministry spokesman Wang Wenbin on Monday night said that he was not aware of some cargoes being allowed to unload and referred questions to the relevant authorities.

The Anastasia is the second ship carrying Australian coal to be allowed a crew change in the past month.

The Jag Anand had been stuck off the Chinese port of Caofeidian since June but a breakthrough in January after months of lobbying from the Indian government, unions and the ship’s owner, Great Eastern Shipping, saw the vessel and its 23 crew members granted passage to Japan.