When Julia Banks became the only Liberal candidate to snatch a seat from Labor in 2016, her then community engagement chairwoman, Gladys Liu, credited a WeChat campaign for mobilising the Chinese community to vote conservative.

Six years later, Liu has taken over the seat of Chisholm, where she is defending one of the smallest margins in the country, without the aid of WeChat, even though a quarter of her electors are from Chinese-speaking households. Liu pledged to stop using her account after prime minister Scott Morrison’s profile was taken over without notice in January, fuelling fears of Chinese influence on Australian politics. 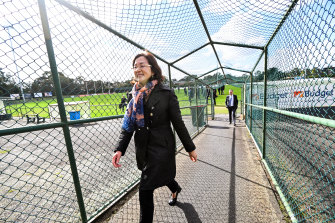 Labor’s Carina Garland is now said to be winning the WeChat debate with pithy summaries of Labor lines on the Chinese-based social media platform.

The super-app that includes messaging, large group chats, posts from public figures and financial payments is the main source of news and community information for 60 per cent of Mandarin speakers in Australia, according to an Australian study.

However, the official absence of Liu and other Liberals does not mean they are silent on the platform. At least two of Liu’s local supporters post information about the MP and her work, and invite locals to events such as visits from federal ministers.

One prominent community member – Michelle Zhang, who has been photographed at party events with Liu – posted fake news stories in December about Premier Daniel Andrews being tried for treason and facing the death penalty.

Post from Tom Ma, campaigner for Michael Sukkar, on WeChat.Credit:WeChat

In the neighbouring seat of Deakin (centred on Ringwood) held by Liberal MP Michael Sukkar – where almost 10 per cent of voters have Chinese ancestry – Liberal operative Tom Ma has been recruiting volunteers to the campaign via an account, registered in China, named “Dark Blue Wilderness”.

“From Blackburn to Mitcham, there are many Chinese people, so we need Chinese volunteers to participate,” he posted during the election campaign.

The ABC reported last week that Liberal Party supporters including Ma’s father had last month pushed a disinformation campaign on WeChat accusing Labor supporters of being investigated by intelligence agencies for election interference. 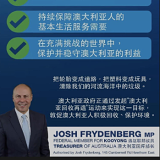 An advertisement for Josh Frydenberg on a Chinese-language finance news account on WeChat.Credit:WeChat

A spokeswoman for the treasurer acknowledged the banner ads but said his office did not pay for any articles.

“Josh Frydenberg has deep links into the local multicultural communities, and works hard to represent their interests in the Australian parliament,” Frydenberg’s spokeswoman said.

In a written statement, Liu said she “engages with all media, including Chinese language media, to communicate and engage with local residents.”

Haiqing Yu, an expert on Chinese digital media and communication platforms at RMIT, said Liu and other Liberals were disadvantaged by being largely absent from WeChat, which she said was being used in Chisholm to organise election forums and host events to teach Chinese-Australians about Australia’s voting system. 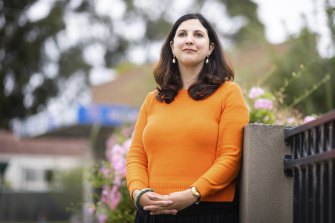 Labor’s candidate for Chisholm, Carina Garland, is said to be winning the WeChat debate.Credit:Paul Jeffers

After a street-walk with Labor foreign affairs spokeswoman Penny Wong, Garland posted: “[I] had the honour to meet many workers who have contributed to Australia’s multicultural development. I have heard everyone’s voice: build a prosperous Australia for a better future.” 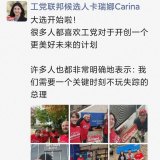 She said Liu’s move off WeChat was unwise.

“We know of the surveillance issues … but I think Australian politicians having official accounts and exposure on WeChat enables them to directly communicate across the diaspora, instead of forcing them to consume policy announcements from second-hand translated news stories which can be sensationalised and potentially include misinformation.”

Liu claimed partial credit for a running a WeChat campaign in the 2016 election that focused on state Labor’s controversial Safe Schools program, which taught young students about LGBTQ issues in an attempt to lower bullying rates. These messages were mostly shared in private groups, which hold up to 500 people and usually focus on specific policy issues or geographical areas. These groups are separate from public figures’ official accounts, which are public and can be viewed by anyone.

“Chinese people come to Australia because they want good things for the next generation, not to be destroyed – they use the word destroyed – [by] same-sex, transgender, intergender. All this rubbish,” she told the Guardian in 2016. Liu says she was explaining some Chinese-Australians’ views, not hers.

She said her campaign, run by volunteers, had focused on safe schools, same-sex marriage and economic management. And in the same 2016 interview, she also said she had raised the issue of immigration saying: “If Labor is going to open the gate and let refugees in, that will affect people here and their lives here”.

Answering questions from The Age last week, Liu said she shared the views of NSW candidate Katherine Deves that the fairness of womens’ sport needed to be protected. Yang said she had not seen evidence of discussion of trans rights in WeChat groups around Chisholm in recent weeks.

“I know she [Deves] is very strong in supporting women and girls in sports. That’s what I do, too,” Liu said. “What I’m doing now is talking to everyone including [transgender people] and the LGBTI community … I invited a transgender woman to my International Women’s Day morning tea and I intend to work with everyone to make sure that everyone is respected.”

A Lowy Institute survey published in April showed 86 per cent of Chinese-Australians who use WeChat do so for news and information, but less than half of them believe the news shared on the platform is reliable – a much smaller proportion than those who think Australian media is fair.

Some of this suspicion stems from a view that the Chinese government censors and monitors WeChat. When Morrison’s account was taken over, Commonwealth sources told The Age repeated requests to restore the account had gone unanswered by WeChat and Chinese tech giant Tencent, which owns the platform, fuelling suspicion it was not a third-party hack but involved Chinese state interference.