The Prime Minister insisted her plan was the only credible idea on the table – just minutes after the EU's Donald Tusk insisted it "won't work". 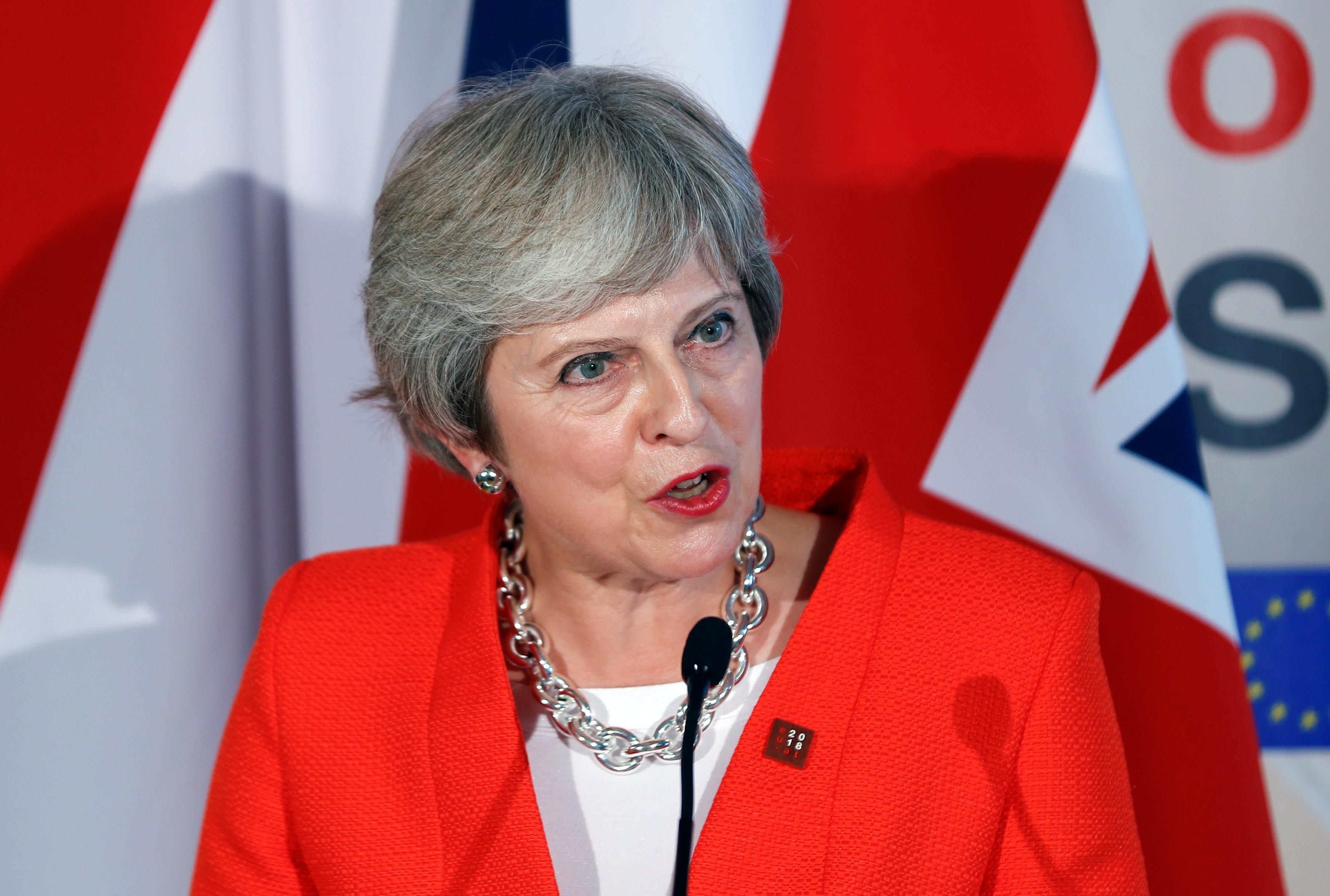 On day two of a European heads of government meeting in Salzberg, Mrs May stuck to her guns and said again that hers was the only option that could deliver for everyone.

She said she had a "frank" talk with EU leaders, but insisted she was "negotiating hard" to try and get a deal despite the set-backs.

An irritated Mrs May insisted that plans for the Irish border "cannot divide the UK into two territories" and she would never accept that, but admitted there was just weeks left to come to a deal.

However, Mr Tusk told reporters at a press conference just a few minutes earlier: "There are positive elements in Chequers, but this adjusted framework for economic cooperation will not work". 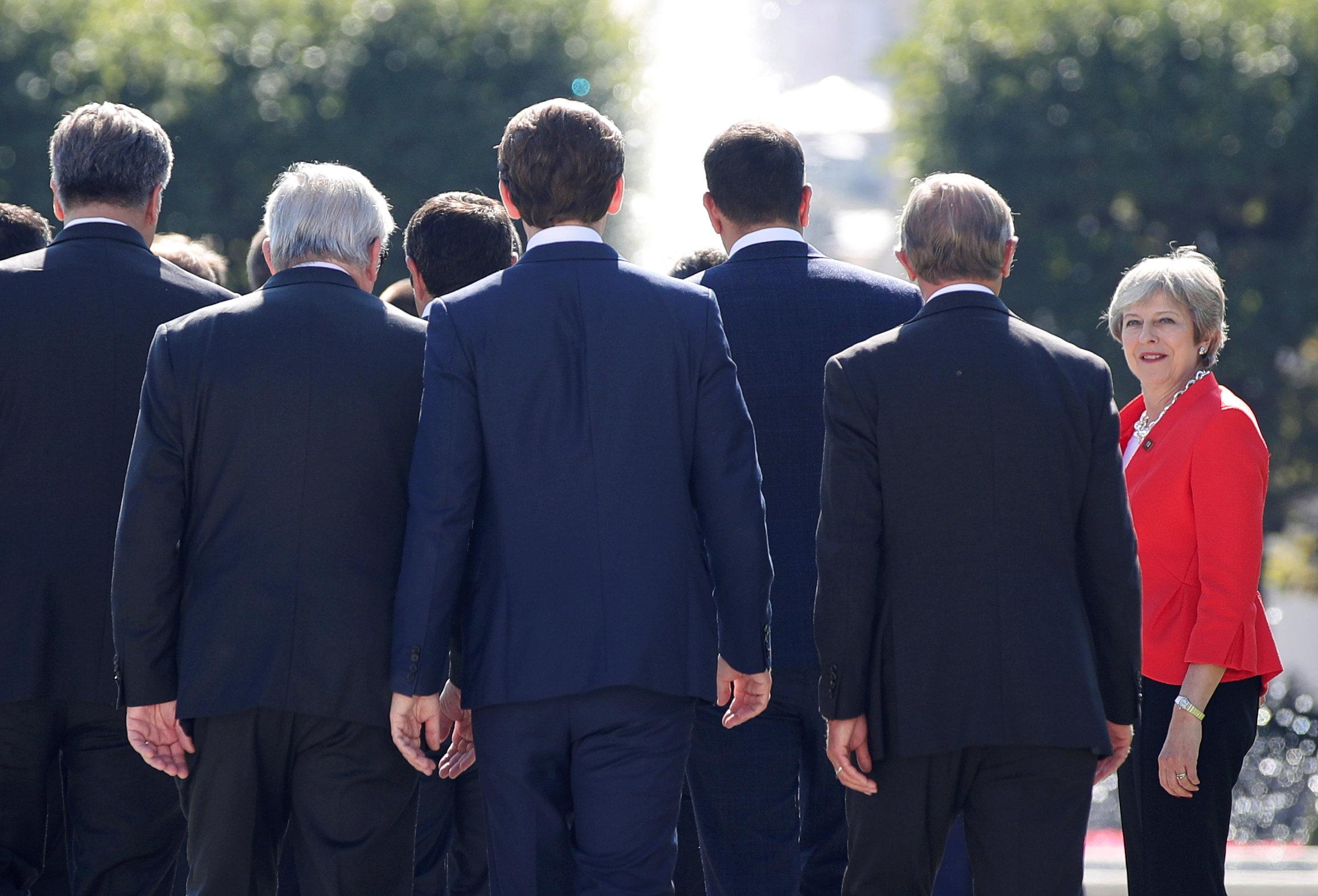 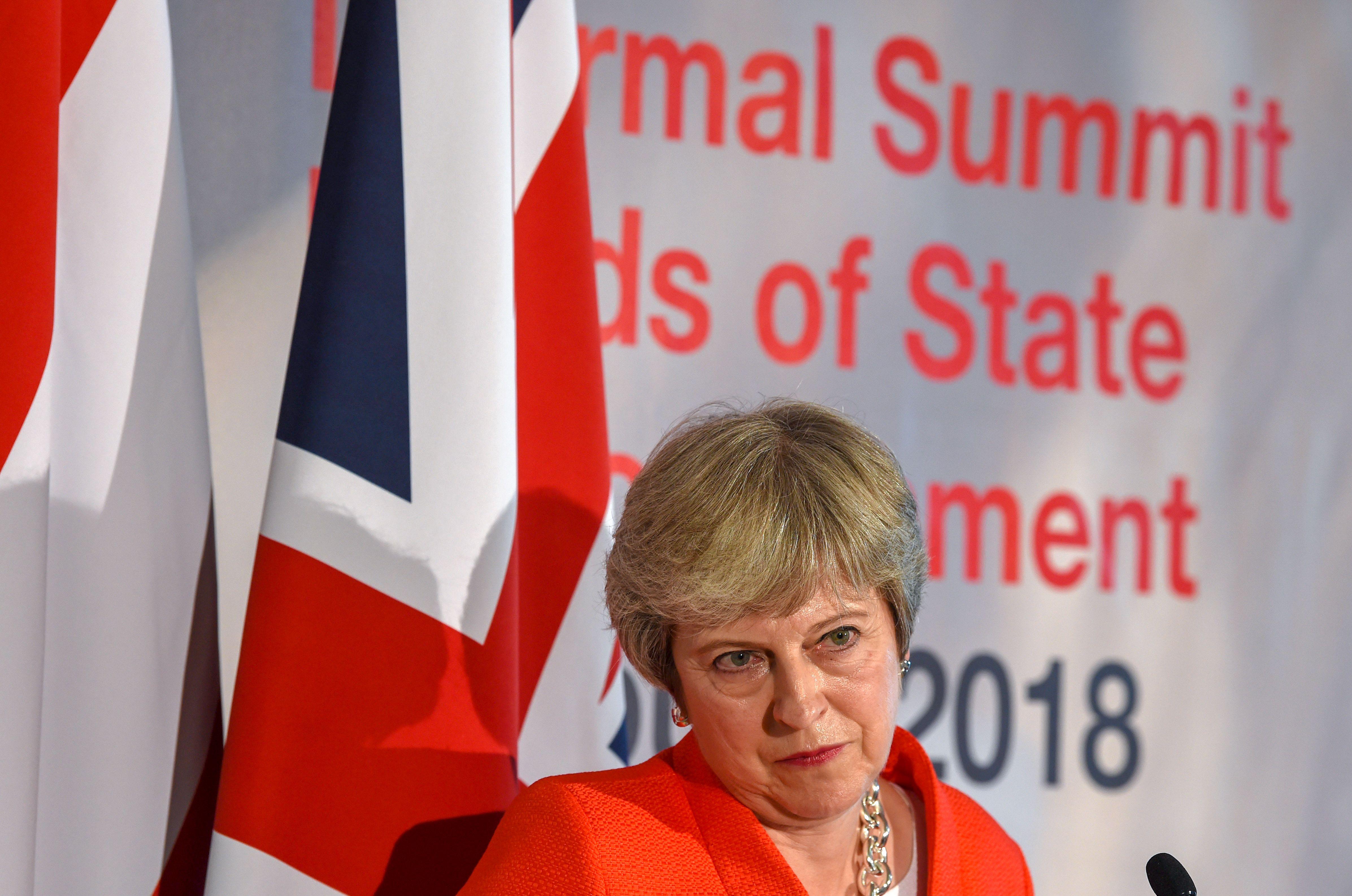 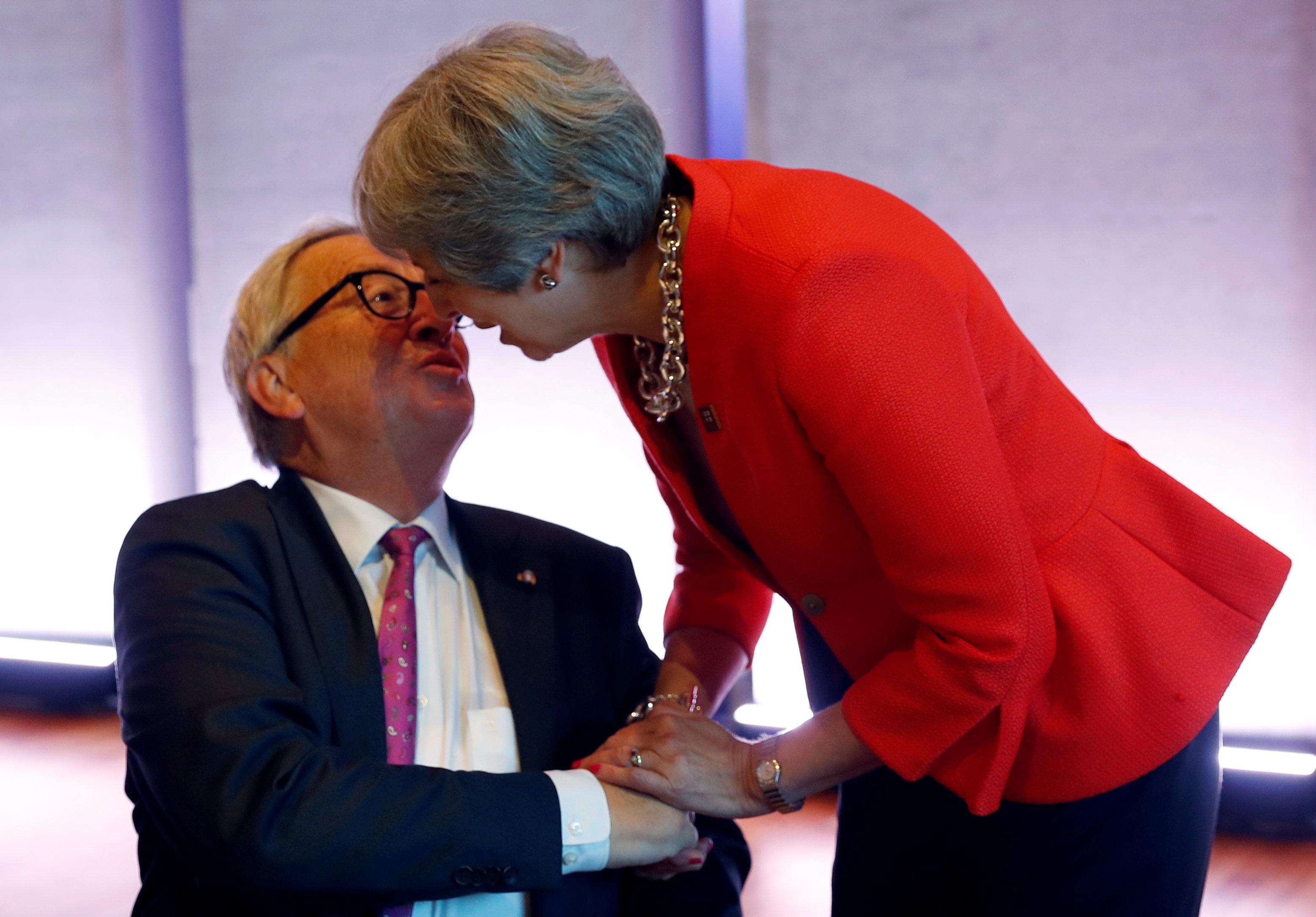 In a brutal take-down this afternoon, the European Council boss insisted that the PM's ideas would tear apart the bloc's principles, and they would not accept them. 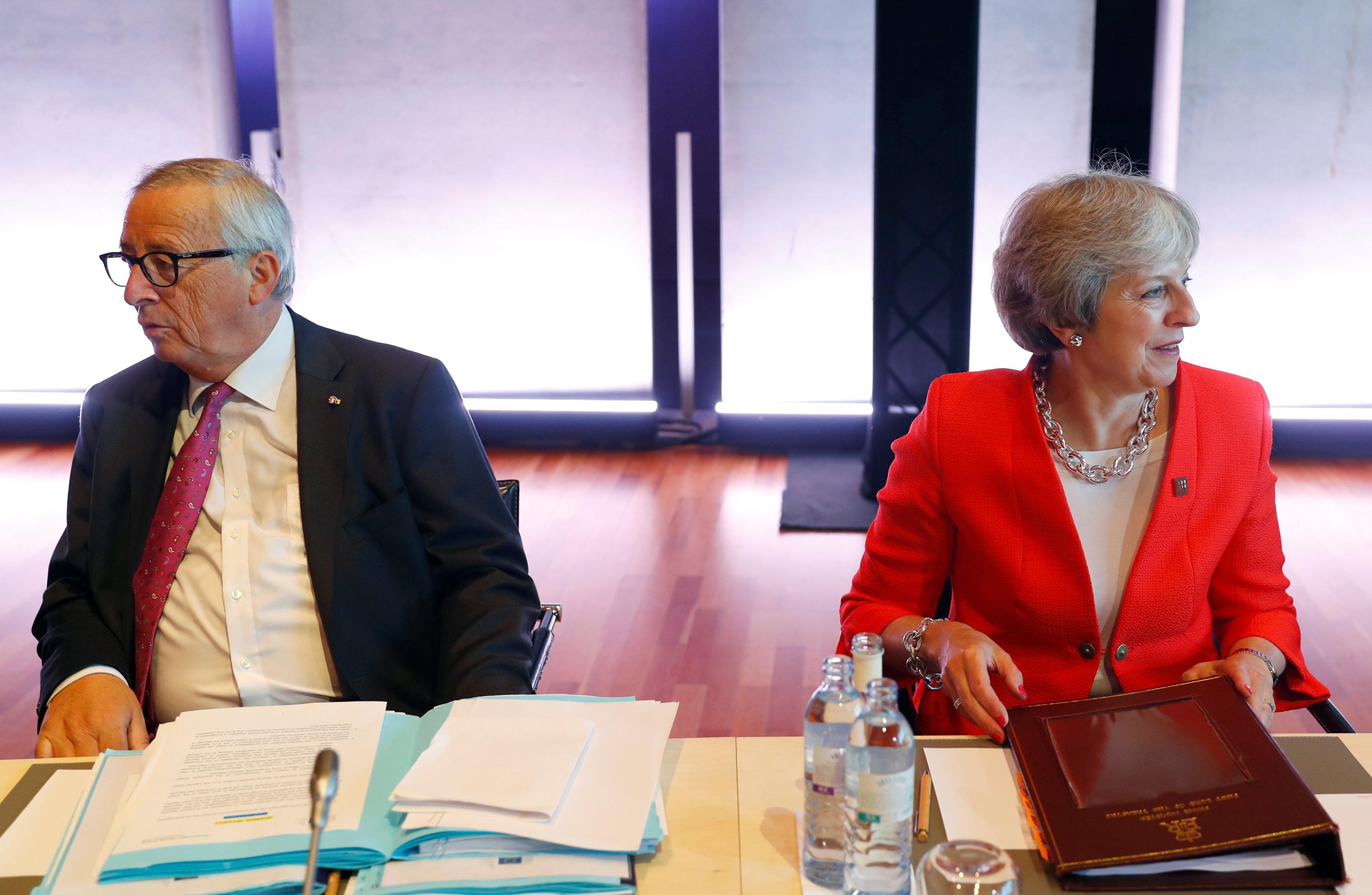 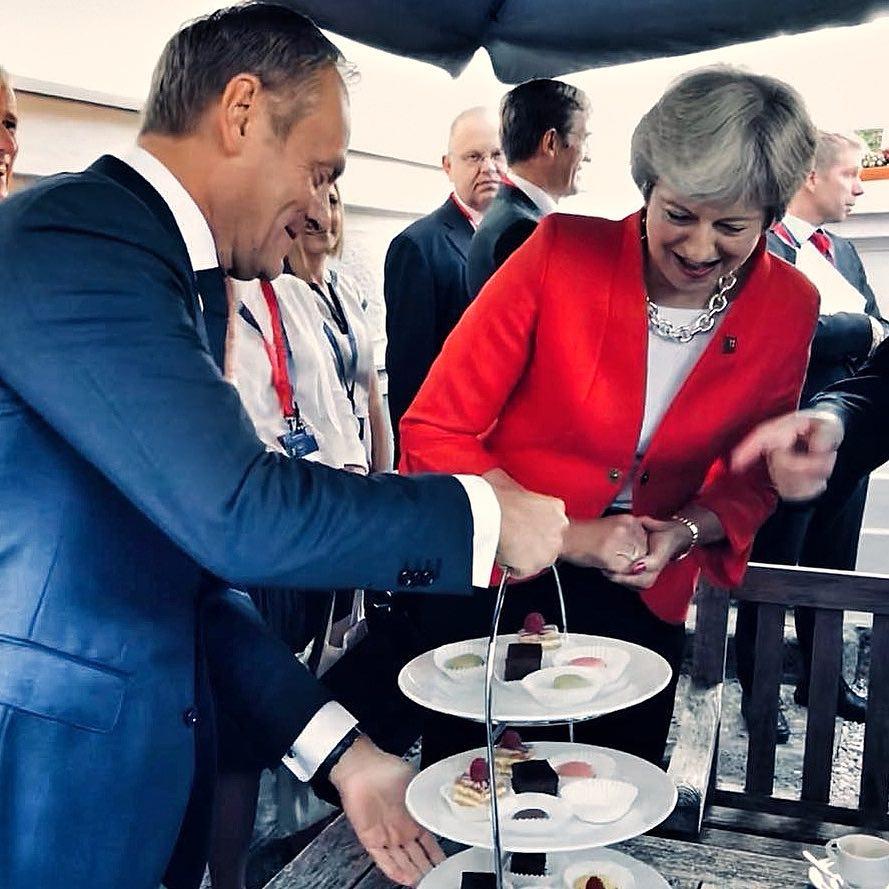 It was hoped that there would be some "warm words" for the Prime Minister ahead of her party conference next week, but today's outright dismissal of her plans will raise Brexiteer hopes that she will ditch her hated Chequers plans.

Last night Mrs May warned them her deal was the only way forward, and she would not delay our EU exit in any circumstances.

The standoff over the Irish border comes after deep splits emerged today within the EU over how to deal with Brexit.

Some reports say that a rebel group led by the Netherlands and Belgium – and backed by European Council President Mr Tusk – are more keen to compromising with Britain over our EU exit.

But Michel Barnier, along with the leaders of France and Germany, are standing firm in their positions on the Irish border.

Today President Macron insisted: "We have to remain united and consistent with what we want.. what we need is an agreement with the backstop for our Irish friends." 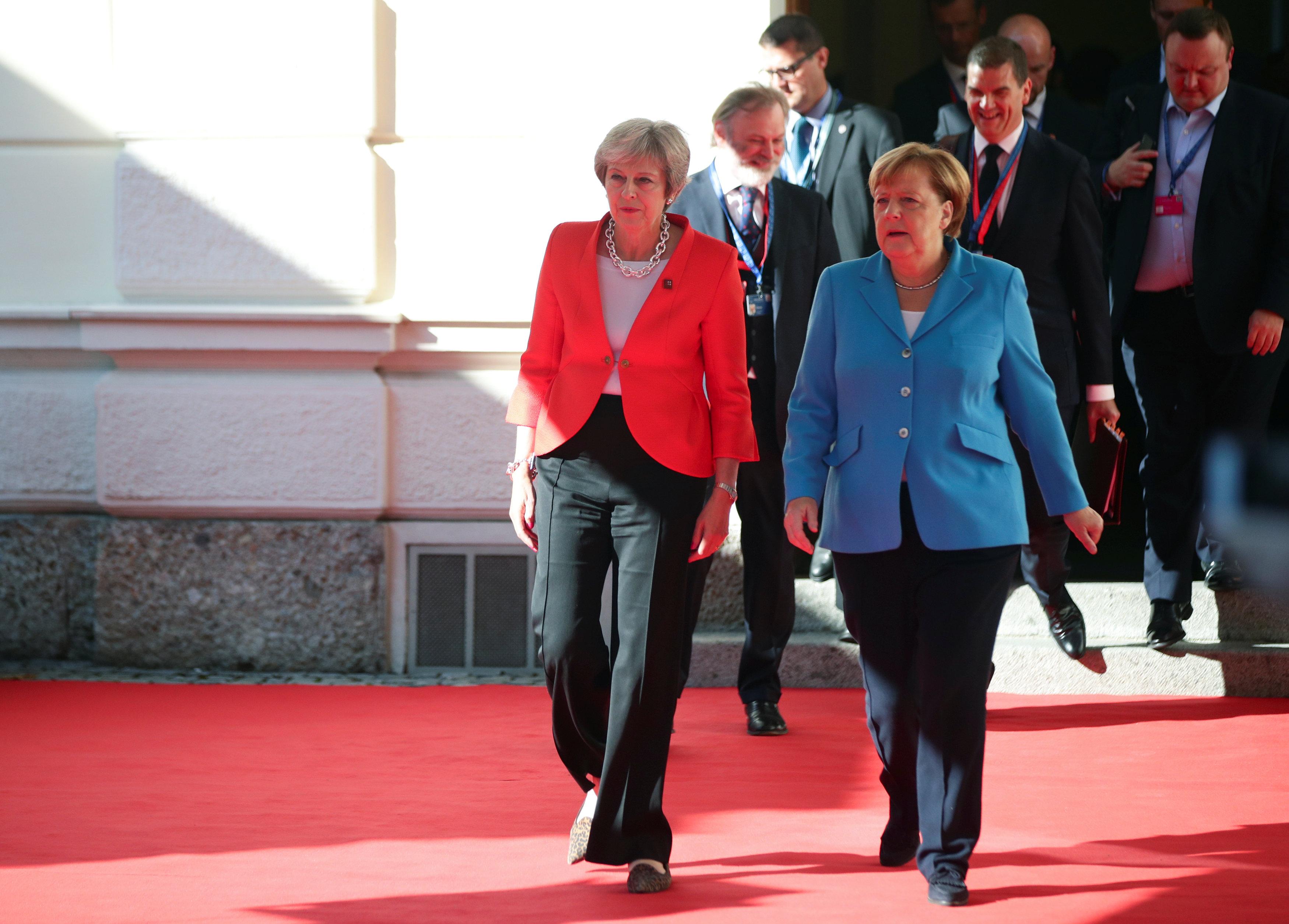 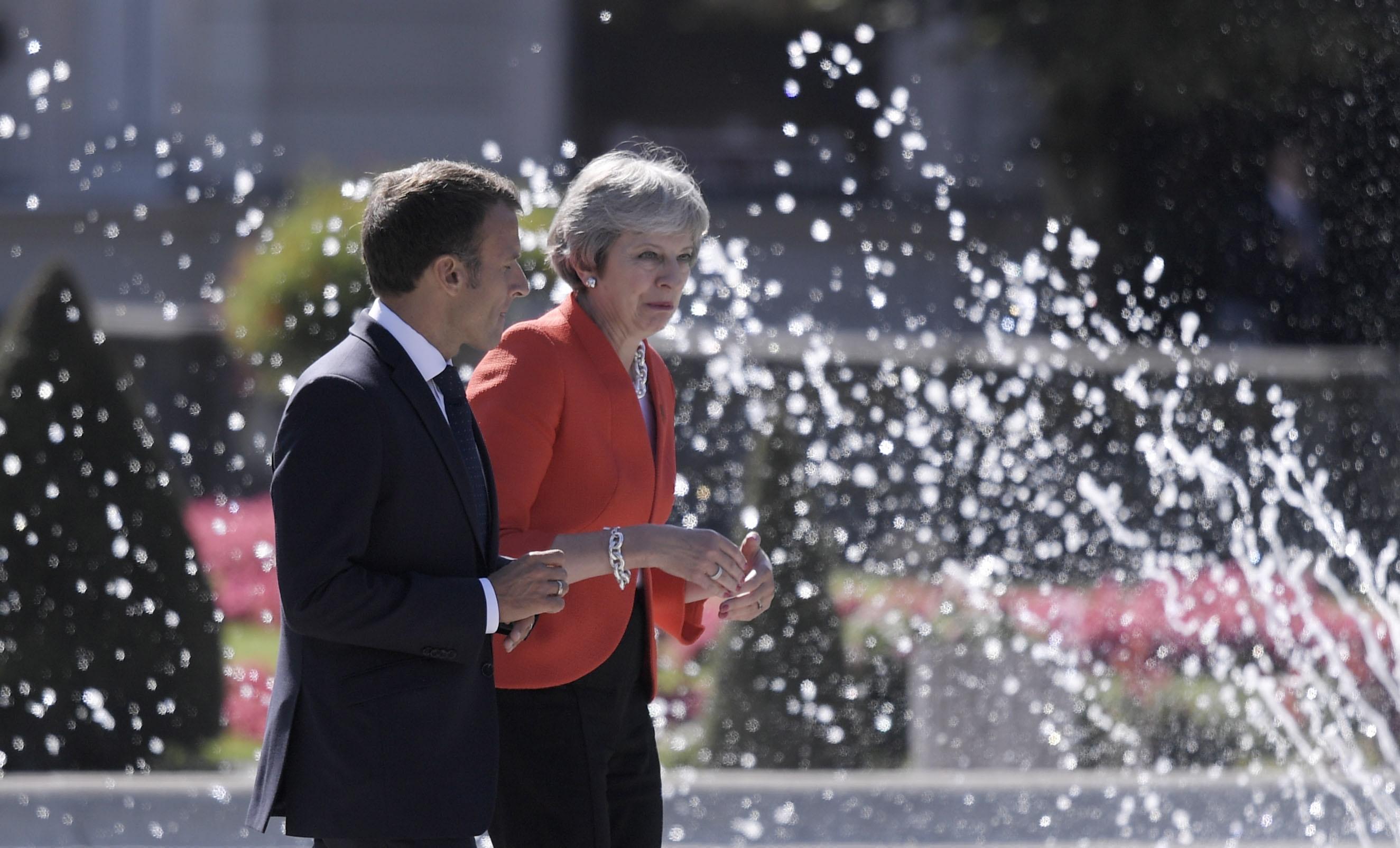 But Mrs May demanded yesterday the EU drop their hardline demands on the border in Ireland, telling them that it would effectively divide up the UK and keep Northern Ireland in the bloc after we leave.

Irish PM Leo Varadkar, who Mrs May met with this morning, said the EU was "very united around our view that we need to protect the integrity of the single market".

However, Hungarian leader Viktor Orban said he wasn't part of the group in the bloc which believed the EU should punish Britain.

He said: "The other camp of prime ministers they would like to deliver evidence that to make that kind of decision is to be punished and the British must suffer. I don’t like that approach at all. What we need is a fair Brexit and good cooperation between UK and EU in future."

Jean Claude Juncker appeared to be on the fence, telling reporters that Mrs May's 10-minute speech at dinner was "polite, it was not aggressive, she was doing her job".

This morning Mrs May had meetings with other leaders – including Angela Merkel and a series of other leaders.

Mr Tusk this morning posted a sassy snap on his Instagram of him offering the PM a bit of cake, with the caption: "A piece of cake, perhaps? Sorry, no cherries."

TWO EU leaders have spoken out and demanded Brits change their minds and reverse Brexit today.

Ahead of Theresa May's crunch summit in Salzburg, the PMs of Malta and the Czech Republic took the unusual step of calling for a fresh referendum on leaving the EU.

Ignoring the clear will of the 17million Brits who opted to break free of the bloc in 2016, Andrej Babiš, the eurosceptic Czech prime minister, told the BBC he was “very unhappy that the UK is leaving and maybe it would be better to make another referendum”.

And Joseph Muscat, the Maltese PM, said most of the other EU leaders agreed, and wanted to make the "almost impossible" happen.

"I think most of us would welcome a situation where there is the possibility of the British people, putting things into perspective, and then deciding once and for all," he added.

But last night the PM told EU leaders there was not going to be another vote. 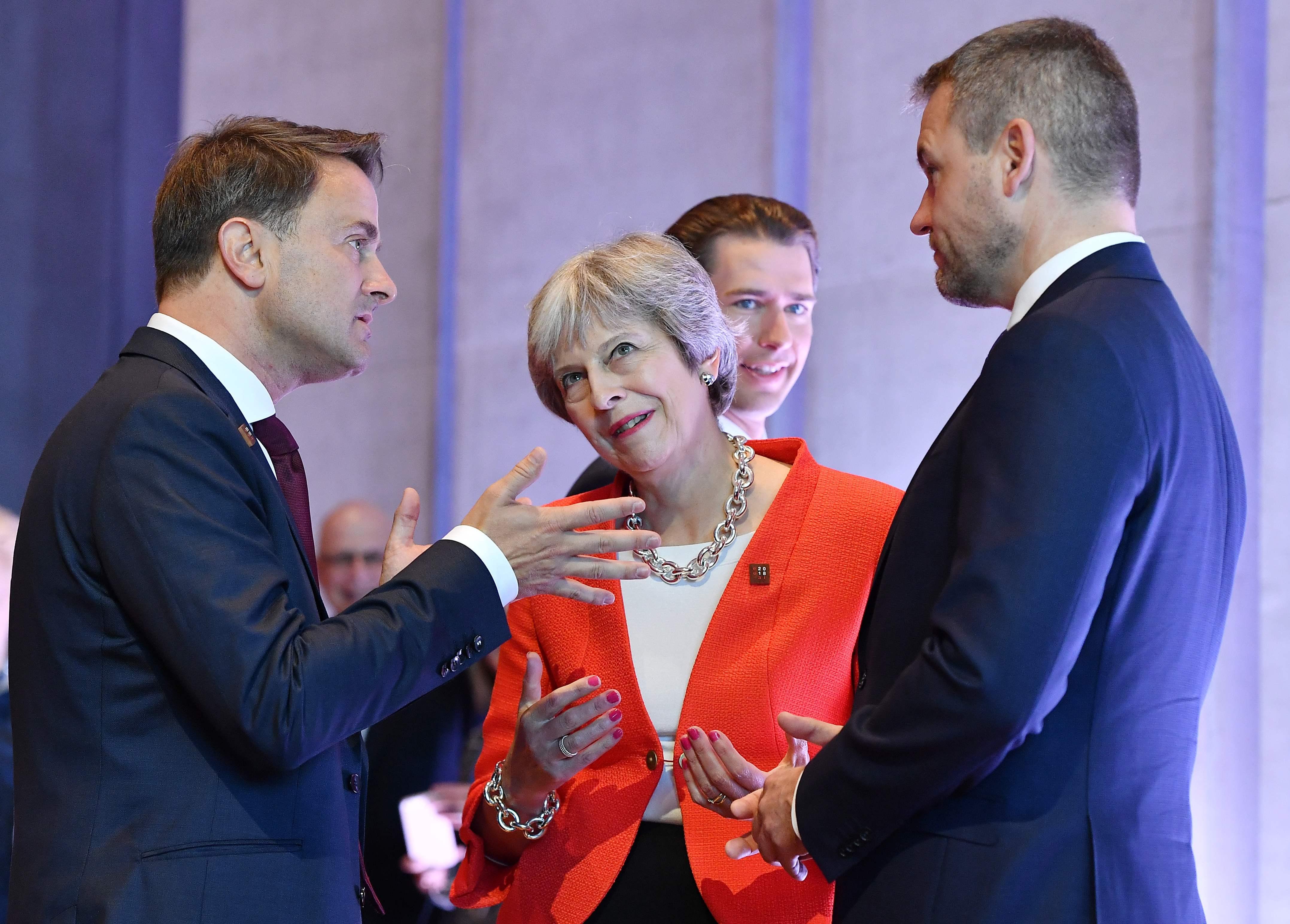 What is the row over the Irish border after Brexit?

The Brexit talks are deadlocked over the issue of the Irish border.

Brussels wants an operational "backstop" in place to prevent a so-called hard border between the Republic of Ireland and Northern Ireland after Brexit.

But that would effectively keep Northern Ireland in the EU's single market and customs union.

Theresa May simply won't accept this because it will effectively break up the UK and put a virtual border in the Irish sea.

And it will infuriate her coalition partners, the DUP, too, who she relies on to win votes in the House of Commons.

A new plan by Mr Barnier – revealed by The Sun on Saturday – to police the new customs border between Britain and Northern Ireland with invisible technology has also been thrown out by No10.

Britain wants an agreement to not be needed, by agreeing a close partnership with the EU which would make the backstop void. 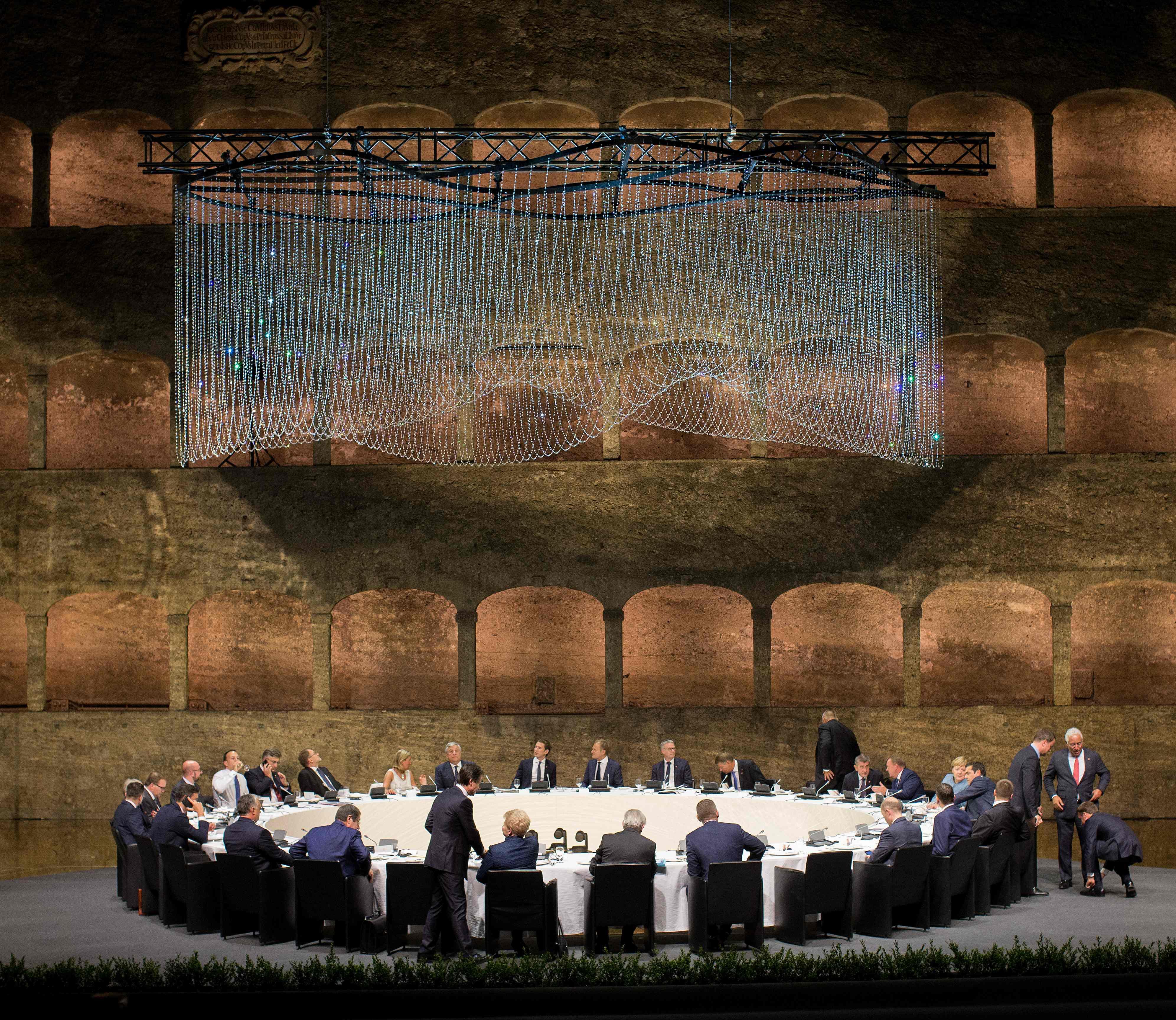 Mr Davis, who quit over Mrs May's blueprint for our EU exit, tore them to shreds in a speech today.

He told an audience: "Chequers is devoid of democracy altogether."

Telling Brits they must "seize this historic opportunity", he argued that Chequers destroyed all the manifesto promises Mrs May had made on taking back control of our money, borders and laws.

And he lashed out over plans to keep us tied to the EU forever by accepting a common rulebook.

"We cannot be governed by a body that we have no control over. It should not even be contemplated," he added.

Mr Davis, who is bringing forward an alternative Free Trade Agreement plan in the coming weeks, said Chequers was unpopular among the public too.

And on the tricky issue of the Northern Ireland border – which is a huge sticking point in the talks – he insisted there would not be a hard border between the Republic of Ireland and Northern Ireland after we leave – because EU politicians have said they won't put one up.