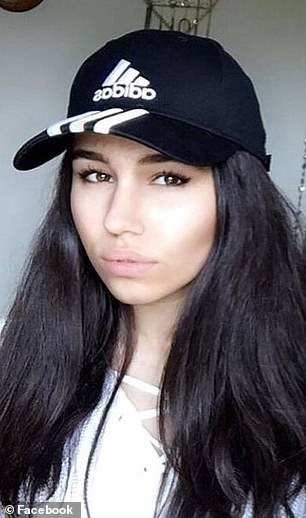 Another teenager was hospitalised with an allergic reaction to the same Pret-A-Manger baguette that killed a teenager nine months later, an inquest has heard.

The 17-year-old girl was hospitalised after eating sesame seeds in an ‘artisan baguette’ but the high street chain failed to act quickly enough to improve its allergen signs, it was claimed today.

There had been at least nine cases of customers suffering an allergic reaction to sesame seeds from the store, Natasha Ednan-Laperouse’s inquest heard.

Natasha, 15, of Fulham, West London, had picked up the artichoke, olive and tapenade roll from the chain’s store at Heathrow Airport’s Terminal Five before flying on holiday to Nice.

But the ‘artisan baguette’ had sesame seeds in the dough and the schoolgirl was severely allergic to dairy, banana, sesame seeds and nuts.

Her father Nadim, chief executive of Wow Toys who was awarded an MBE in 2000, gave her two EpiPen doses and was helped by a junior doctor on board the flight. 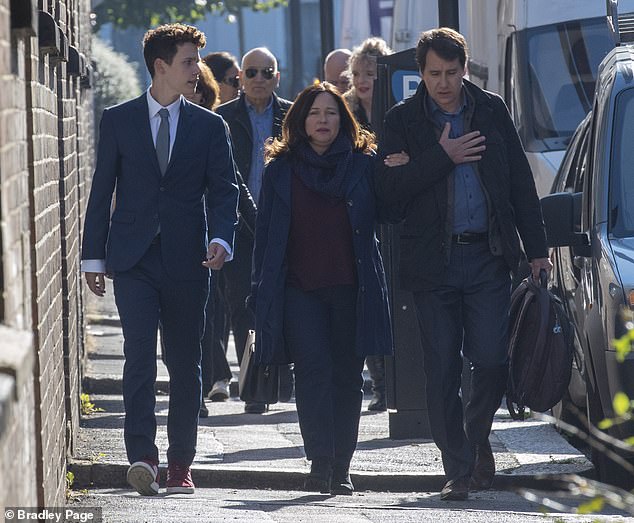 And when her story hit the headlines, the woman, who was not named, contacted the Ednan-Laperouse family’s lawyers and said the same thing had happened to her in September 2015 when she was 17.

Jeremy Hyam QC, representing the family said: ‘In the year prior to Natasha’s death there are nine out of 21 incidents which are sesame related.

‘Of those nine sesame incidents, four went to hospital and one went to a medical centre so the very serious ones, the hospital ones, are all associated with sesame in the year before.

‘One of those complaints, as a result of the press coverage of this case, contacted the family’s lawyers.’ 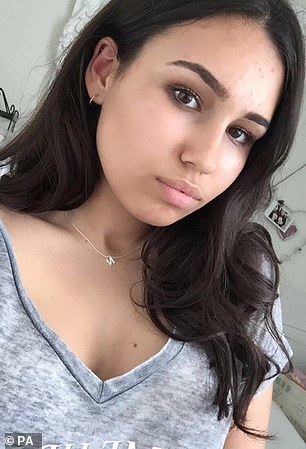 Natasha, 15 (pictured), died of a severe allergic reaction after she bought the baguette

The court heard that the woman was with her father doctor had bought one of the ‘artisan baguettes’ that contained sesame seeds and similarly to Natasha had a serious allergy.

She was able to receive immediate medical assistance – but was still hospitalised and fitted with a drip after a serious anaphylactic shock to the seeds. 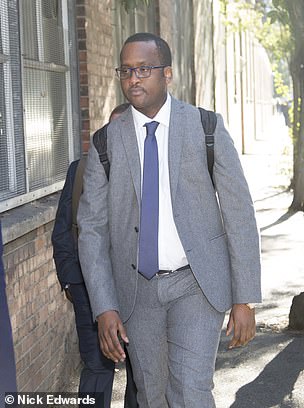 The Pret store manager, Aboulaye Diallo, is pictured arriving at the inquest yesterday

Mr Hyam said: ‘The person she spoke to said that Pret was bound by different laws. It took a year or thereabouts for this near death incident to make a change in signs.

‘At least by December 2015 you were or ought to have been in a position to realise that that there was sesame baked into artisan baguettes was leading to individuals suffering from allergic reactions and being sent to hospital.’

The inquest heard that outlets such as Pret, that make sandwiches in store, are in fact bound by different laws to those that sell pre-packaged sandwiches – which require a label containing an ingredient list, with allergens highlighted in a bold font.

Pret is required to make customers aware of allergens but can do so ‘orally’ – by including signage in the store that tells customers to speak to a member of staff about which products may contain allergens.

Jonathan Perkins, director of safety and risk at Pret said: ‘We were aware of a number of incidents that happened. 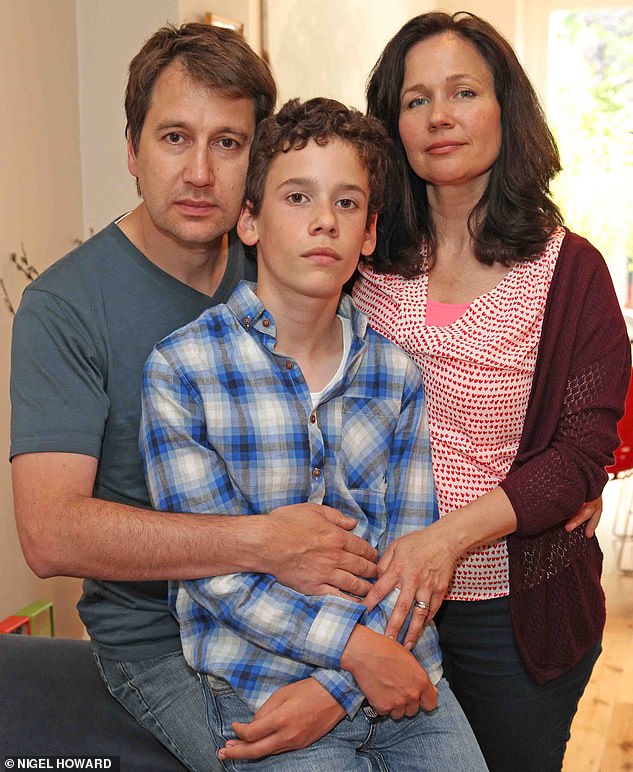 Nadim Ednan-Laperouse, pictured with his wife Tanya and son Alex, is a millionaire toy tycoon

‘I accept that there have been a number of individuals who have had a very negative experience and a very tragic experience.

‘But we also looked at the many tens of thousands of allergy sufferers that come through our doors and shop confidently and safely with us. 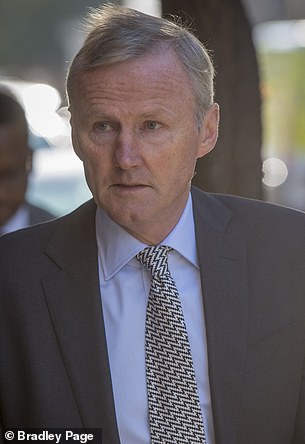 ‘In recognition that there were a small number of allergic reactions in 2015, I don’t accept that our signage or our allergen management was failing.

‘We have had local incidents but I wouldn’t accept there’s a systems failing. There had to be a material risk benefit. We had to be clear we identified the right solution.

‘We have to be consistent with providing communication with our customers.

‘My duty is to provide a system which can be consistently delivered by thousands of people who buy our products every day.’

Mr Hyam also told the inquest that Pret-A-Manger had marketed a chocolate and hazelnut croissant as a ‘chocolate croissant’ which had led to a number of allergic reactions from nuts.

Mr Perkins said: ‘It was marketed as a chocolate croissant, we have subsequently changed the name to chocolate and hazelnut croissant.’ 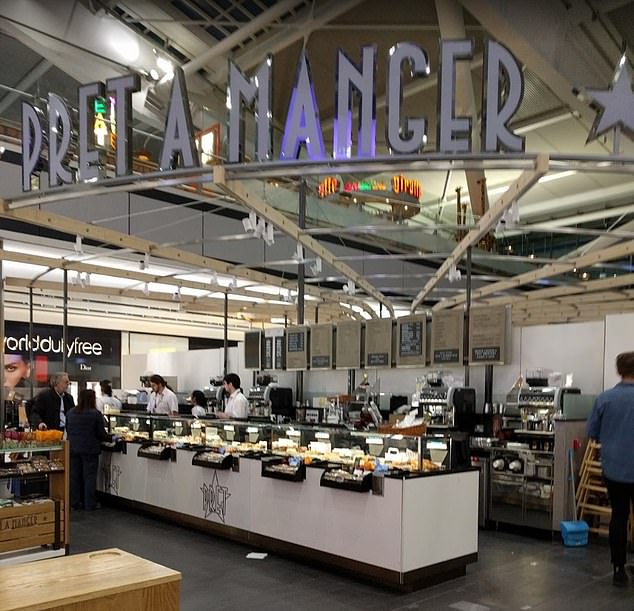 The baguette the teenager bought at Pret’s Heathrow Terminal 5 branch did not have sesame listed on the ingredients, her family say

The inquest also heard that Pret puts signs on its soup packaging to tell customers they are ‘gluten and dairy free’.

Pret, one of the country’s biggest food chains, did not have to list sesame seeds as an ingredient in the £3.45 sandwich.

Pret products do not have to be individually labelled with allergen or ingredient information.

This is because Pret sandwiches are freshly prepared in store.

Instead, signs on shelves and by tills in Pret stores tell customers with allergies to speak to a manager who is trained to give allergen advice.

Before hearing of the case, Pret had started to improve the allergen information it offers customers, but the inquest will explore whether more should be done.

Pret’s website now carries a list of allergens in its food and drinks, including highlighting sesame in the artichoke, olive and tapenade baguette.

Mr Hyam said: ‘When the wholesaler or manufacturer of the bread – they put a label on them saying contains allergens. But when you sell the same product to the customer you don’t.

‘So if I go into Pret, I get some information about some products that it doesn’t contain gluten and dairy which are allergens, but in relation to other products such as the artisan baguettes which have seeds baked into them – there’s no information about allergens.’

Mr Perkins replied: ‘They marketed the soups as gluten free, and dairy free. We don’t say the presence of allergens in any individual item.’

Mr Perkins said the gluten and dairy free packaging was not related to allergens but to inform people with certain ‘dietary regimens’.

The director of safety and compliance agreed that if signs telling customer’s to ask a member of staff about any allergens in the sandwiches were not present, this would be a ‘serious failing’.

He said: ‘There’s a real importance to having those stickers in place and if it wasn’t in place that’s a failure. I accept it would be a serious failure.’

The hearing heard that following a refurbishment of the same Pret-A-Manger outlet that Natasha visited in January 2017, a colleague checking the store did not find any of allergen stickers in store.

Mr Hyam said there were 15 till points following the makeover, but the investigator had not found an allergen sticker on any of them. The hearing continues.