JOHN NAISH: Can you tell a snowbomb from a frostquake? Our wild winter weather has brought with it a blizzard of new terms, so are YOU a snow-it-all? 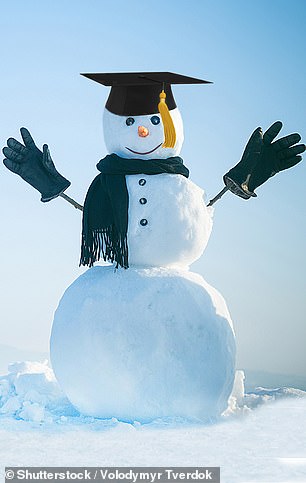 So you think you are a SNOWITALL?

From snowbombs and bomb-cyclones to polar vortexes, flash freezes and a bit of snizzle, there’s a new lexicon of weather swirling around us, as meteorologists struggle to describe the volatile events associated with our worsening winter climes.

Whether it’s down to climate change or natural atmospheric blips, many parts of the world, including moderately temperate Britain, are experiencing phenomena once so rare — or even just theoretical — that they merited only an occasional mention in obscure science journals.

This week, America is enduring one of the coldest spells in its history with temperatures of minus 41c (minus 42f). While the UK is in the grip of an Arctic blast as the mercury plummets, and widespread snowfalls forecast overnight — described as a ‘danger to life’ — threaten chaos today.

Suddenly, conventional terms are no longer enough to describe violent blizzards that appear from nowhere and catastrophic freezes that can kill in minutes.

It’s enough to make solastalgiacs (sufferers of anxiety caused by climate change) of us all — unless, of course, you’re a sturdy chionophile (someone who loves freezing weather).

Here’s what you need to know about our weird winter weather.

Until recently, you’d have had to search through an 1853 almanac called the Living Age to find any mention of the phenomenon of a polar vortex. But in January 2014, this once-obscure weather event escaped from its natural home in the North Pole to wreak destruction much further south in the U.S.

Now it’s back and being blamed for the deep freeze engulfing much of America’s Mid-west, killing at least 12 people and inflicting temperatures colder than Antarctica.

So what is it? The vortex is a wind current that sits like a spinning ‘hat’ above the North Pole.

Normally, the Jet Stream — a narrow band of fast flowing air at high altitude that marks the boundary between cold polar air and warmer air to the south — traps the vortex above the pole.

In early January, meteorologists warned that another factor was coming into play — a sudden warming of air in the stratosphere above the North Pole.

They predicted, apparently correctly, that this warm air would further weaken the integrity of the polar vortex and cause it to split off into smaller ‘sister vortices’ that could travel south far beyond their typical range — as has indeed occurred. 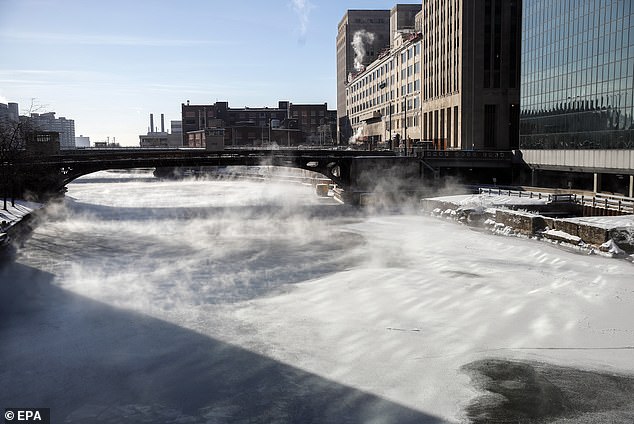 A once-rare occurrence, this is a type of thunderstorm in which snow or hail falls instead of rain.

This is because temperatures at the centre of the storm clouds have plummeted to freezing and below. Often, people are unaware they are in the middle of thundersnow.

Snow dampens sound, so you have to be almost right beneath a lightning strike to hear the following thunderclap.

The term describes a dramatically rapid plunge in atmospheric pressure that sends barometers plunging down by at least 24 millibars within 24 hours.

It’s been around since the 1940s but was taken up by forecasters in 2014 to describe a fast-forming catastrophic snowstorm that was heading rapidly towards the East Coast of America.

Our own British snowbomb caused heavy blizzards and transport chaos. Up to 12 inches of snow fell in some places.

Again, the Jet Stream was implicated. ‘Wobbles’ in its flow had prompted that sudden fall in atmospheric pressure over the Atlantic. This in turn sucked in Arctic air from Scandinavia and the East — to create a whirlpool of vicious winds and stormy weather that swept eastwards into Britain.

The Beast from the East — the cold blast which hit Britain in February 2018 and in a weaker form in March — had its origins in similar but less dramatic atmospheric falls over a longer period of time. 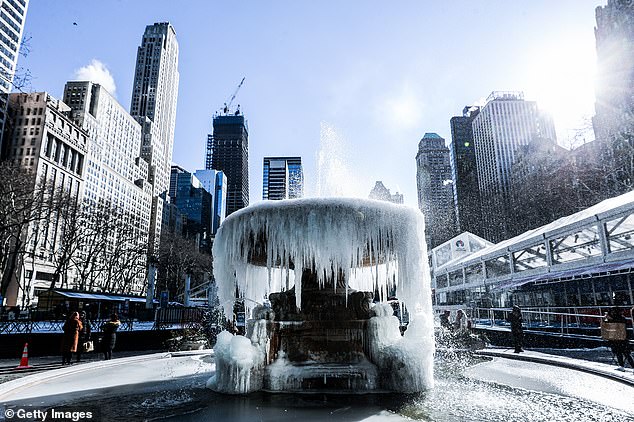 These were virtually unknown until 2013 when a major ice storm and a numbing deep freeze struck eastern Canada in December 2013.

Residents were alarmed to hear deep bangs in the middle of the night. Emergency phone lines were swamped as people panicked at the prospect of earthquakes or mystery bomb blasts.

In fact, the bangs were caused by frostquakes (also known as cryoseisms) — when water freezes deep underground and turns into ice that expands so powerfully that it forces huge cracks in subterranean rocks.

They are caused when heavy rain is followed by air temperatures plunging far below zero.

The rapid appearance of perishingly cold winter storms can in turn cause a new traffic peril called flash-freezing.

A flash freeze will occur when sub-zero wind blasts over a wet road and instantly turns the water to ice. It can be lethally unexpected, because it doesn’t have to be snowing, sleeting or raining for the road surface to turn into a rink.

That wind can also be cold enough to freeze your car doors shut.

Flash freezing is a cousin of deadly black ice, which forms most often when it’s raining and air temperatures are 32f (0c) or below.

This is cold enough to freeze the rain on impact. It’s called black ice because it is so transparently thin that it can look just like ordinary road tarmac. 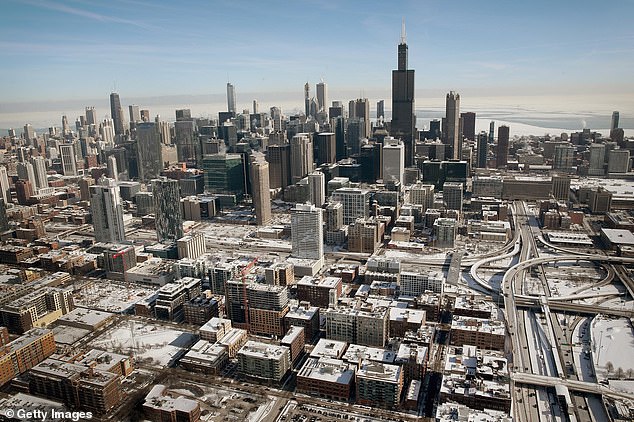 Snow, ice and salt covers buildings and streets throughout downtown Chicago where the windchill is driving perceived temperatures down to minus 40 and below

These are caused by wild winds spinning over surfaces that are covered in snow and are also known as snow devils, ice devils or willy-willys.

They form when a mass of cold air passes over a warmer surface, heated by sunlight.

Wind shear — a variation in wind velocity at right angles to the direction of the wind — then causes the rising air to spin. In January 2017, a 100ft-high snownado was filmed by a holidaymaker near Aviemore in the Scottish Highlands. ‘Beautiful but scary’ was how Lynn Godfrey described the spiralling pillar of snow and ice as it engulfed nearby skiers and walkers.

What about Wind Chill?

Unless you were an Arctic explorer, once all you needed to know about the wind was how hard it would be blowing.

Now, when cold weather strikes, wind chill is a crucial factor, because while the thermometer might read minus 2c (28f), wind chill makes it feel like minus 8c.

Cold air blowing past our bodies takes heat from the skin and reduces our core body temperature.

The stronger the wind, the faster is the cooling and the lower the temperature, the more impact the wind has.

In freezing weather, wind chills can quite rapidly lead to hypothermia.

You may not yet have come across these words but you soon will, according to etymologists at Rice University in Texas, who note they are increasingly popular with weather forecasters.

Snizzle describes a mixture of snow and drizzle. Frizzle is freezing drizzle — although one could argue until the cows come shivering home about whether a downpour of sleet is actually either snizzle or frizzle.

Our changing climate is not only creating wild new weather it is also vastly increasing the chances of one event colliding with another.

Scientists use the term Frankenstorm to describe such monster mixes of lethal conditions.

It was first employed by the U.S. National Weather Service’s Hydrometeorological Prediction Centre in October 2012, when meteorologists realised that Hurricane Sandy was roaring in from the Atlantic to merge with an inland snowstorm to create a superstorm.

The result was the deadliest and most destructive hurricane seen that year, responsible for killing more than 70 people across eight U.S. states.