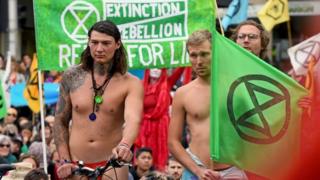 Dozens of Extinction Rebellion activists have been arrested as protests take place across the globe.

Thirty people were charged with committing offences in Sydney after hundreds blocked a road, while activists surrounded a government building in Wellington, New Zealand.

Fifty people were detained in Amsterdam for erecting a tent on a main road.

Protests by climate change activists are expected in some 60 cities over the next two weeks.

The group is also causing disruption in London, with more than 20 arrests on Monday morning.

In Sydney, protesters staged a sit-in on a main road. Hundreds were pulled away from the scene and 30 of them were charged.

Australians have also been protesting in Melbourne and Brisbane.

There were a handful of arrests in New Zealand where activists ringed the government building that houses the ministry granting oil and gas drilling permits in the capital, Wellington.

Fifty people were arrested in Amsterdam after they erected a tent camp on the main road outside the Rijksmuseum, the Dutch national museum.

Activists blocked traffic in Berlin, where authorities have said they will refrain from making arrests for the time being.

In Paris, 1,000 activists backed by the yellow-vest anti-government movement have reportedly occupied a shopping centre.

More than 20 activists have already been detained in London, with organisers vowing to shut down key sites in the city including the Houses of Parliament and Trafalgar Square.

Protests are expected to spread across dozens of cities, including Delhi and New York, in the days and weeks ahead as activists call for urgent action on global climate and wildlife emergencies.