Even by the standards of Saudi Sheiks and Russian oligarchs, the next superyacht to hit the waters is pretty breathtaking.

Known as Project Valkyrie, the yacht -details of which were released last week – will be the most extravagant private vessel ever to take to the seas.

Here we look at some of the others which, while they will soon be falling into the shadow of the Valkyrie, nevertheless offer more luxury that most of us could ever dream of. Although still in its planning stage, should it come to life Valkyrie will be by far the most extravagant private vessel ever to take to the seas.

The yacht is the brainchild of design companies Chulhun Design and Palmer Johnson, who have worked on super yachts although never one this grand.

The yacht will measure 744ft (227m) in length, which is more than two-thirds the length of the world’s longest cruise ship,  Royal Carribbean’s Symphony of the Seas.

It’ll also have room on board for over 140 people, including 50 guests and about 90 staff.

The yacht, while only designed to sleep up to 50 people, also features a number of public spaces including a casino, theatre, mall, restaurants, and exhibition halls. And it comes with the same, exclusive price tag – an estimated £842,000.

This 100ft (30m) superyacht, which took world-renowned UK designer Stuart Hughes three years to complete, became the world’s most expensive yacht when it was purchased by an anonymous Malaysian businessman for £2.8billion in 2011.

The staggering sum is owed to the solid gold and platinum used to assembly this luxury liner which features no less than 100,000 kg of the precious metals.

They adorn the entirety of the boat right from the base of the vessel, coated in a thin layer of solid gold, to the dining area, deck, rails, staircases and anchor.

If that wasn’t extravagant enough, a wall feature in the master bedroom boasts a feature made form meteorite rock, and a statue made from genuine Tyrannosaurus Rex bones.

Also on board is a luxury liquor bottle featuring an 18.5 carat diamond, one of the world’s rarest, along with a panoramic wall aquarium made from 68kg of 24 carat gold.

If that’s not enough some of other on-board features include an iPhone wrapped in 500 cut diamonds including two interchangeable diamonds fitted over the “home button”, a 7.4 carat pink diamond and a rare eight carat diamond. The second most expensive yacht in the world belongs to Russian oligarch and Chelsea owner Roman Abramovich, who is rumoured to have paid around £740million for it in 2010.

Built by Blohm and Voss of Hamburg, the Eclipse is also the second largest at 536ft (163m) long, and needs a 70-member crew to run. And for maximum security, the superyacht has its own missile defence system, while the master bedroom and bridge of the yacht features fitted armour plating and bulletproof windows.

Finally, the unique vessel boats an “anti-paparazzi” shield which uses lasers to sweep the surrounding areas. Upon detection of possible lurking professional photographers, a light is shone directly upon the camera to prevent a photograph being taken. Ownership of the £400million craft is shrouded in secrecy but it is rumoured to have been paid for by a member of the Saudi royal family, Alwaleed Bin Talal Alsaud.

As well as being the longest – more than 12 double decker buses – it is also one of the fastest. The 94,000 horsepower vessel can reach speeds of more than 30 knots, or 35mph. Its designers, Nauta Yachts, boasted that Azzam, which means dedication in Arabic, is the ‘most complex and challenging yacht that has ever been built’.

Although little is known about the interior of the yacht, it requires a staff of 50. The yacht features a steel displacement hull and an aluminum megastructure with 8 decks for different exotic viewing experiences, with a large jacuzzi and swimming deck with a built-in swimming pool. The identity of the billionaire customer is unknown with Lurssen, the boat’s manufacturer, unwilling to discuss personal clients due to strict confidentiality agreements, but it is rumoured to be Shaikh Mansour, the Deputy Prime Minister of United Arab Emirates and a member of the royal family of Abu Dhabi. Originally a joint project between Blohm + Voss and Lürssen shipyards, the Dubai was commissioned by Prince Jefri Bolkiah of Brunei more than 10 years prior to the ship’s launch in 2006.

In 2001 it was acquired by by Platinum Yachts for Sheik Mohammed Rashid al-Maktoum, the ruler of Dubai, who set about personally designing its decadent interior, regarded as the most extravagant art-deco of any yacht.

Using many of the world’s finest fabrics and intricately detailed handmade mosaics, it features a stunning circular staircase with glass steps designed to change colour with the help of natural light radiating inward from the top deck. 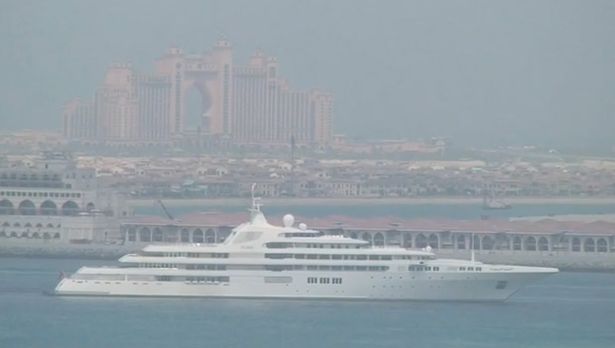 With the ability to accommodate as many as 115 passengers and crew, the seven decks of the Dubai have each been meticulously designed to meet the owner’s needs, with many VIP suites, sunbathing areas, several jacuzzis, a swimming pool, complete with elaborate handmade tiling and an expansive lounge for socialising with guests.

A helipad which can accommodate a helicopter of up to 9.5 tonnes completes this extravagant ensemble, priced at £306m and previously the largest yacht in the world. Presently owned by the billionaire Mohammed bin Salman, the crown prince of Saudi Arabia accused of ordering the murder of journalist Jamal Khashoggi inside the Saudi embassy in Turkey, this Italian-made superyacht was customer built for the Russian vodka tycoon Yuri Shefler.

Microsoft founder Bill Gates would rent the superyacht for $5million a week, until Salman saw it while holidaying in France and at once board it for around £434m.

It comes with a seawater pool, spa pools, a snow room, steam room, and an underwater viewing room to watch the marine life, as well as several play areas for billionaire children. There is nothing unique about the name of this luxury liner however, the 390ft (119m) long Superyacht A does boast an original design.

Reminiscent of a stealth warship or submarine, it was designed by Blohm + Voss of Hamburg for Andrey and Aleksandra Melnichenko, the Russian billionaire and his wife, who paid £247m.

And as can be expected, it is the epitome of luxury with over 24,000 square feet of interior, housing a 1,650 square feet master bedroom and disco, as well as six guest suites which can be converted into four larger staterooms thanks to the moving walls.

In addition, mirrored surfaces feature extensively throughout the interior whilst the furniture, glassware and tableware are made of French crystal.

Above deck, the Superyacht A houses a helicopter hangar, as well as a 30-foot speed boat kept in the hull and three swimming pools, one of which is glass.-bottomed and situated directly above the disco.

Commissioned by a Russian billionaire and now owned by the Emirate millionaire Abdulla Al Futtaim, who purchased it for £208m, the 360ft (110m) Radiant can sleep up to 20 guests and houses 44 crew members The vessel is also said to be equipped with an extremely powerful water cannon so she can defend herself against pirate attacks.

Featuring the 10th most expensive yacht in the world is the Lady Moura, custom built by Blohm + Voss shipyards in 1990 for Saudi Arabian businessman Nasser Al-Rashid. This luxury liner, launched in 1990, is mostly recognisable from the outside owing to its name on the yacht exterior in prominent 24-carat gold lettering.

And the extravagance doesn’t end there. On board the 344ft (104m) Lady Moura is a pool with retractable roof, a helicopter and a 75-foot Viscount Linley dining room table.

However, yacht’s most remarkable feature is the unique sand-covered hydraulic platform that slides out of one side of the yacht which can be adjusted to sit right at the waterline, creating an artificial beach with read sand, deckchairs and even palm trees. With room for up to 30 guests and carrying 60 crew members, the Lady Moura also has a 80 boat or 48-feet Sant Juan boat, as well as a S76B helicopter.

Unlike most other yachts, the Lady Moura is used all the year round as it serves as a permanent residence for its owner, Saudi Arabian businessman Nasser Al-Rashid, who purchased it for £160m.