Dubai: Iran said it had seized a British oil tanker in the Strait of Hormuz on Friday but denied Washington's assertion that the US Navy had downed one of its drones, as tensions in the Gulf region grew again.

Britain said it was urgently seeking information about the Stena Impero tanker, which had been heading to a port in Saudi Arabia and suddenly changed course after passing through the strait at the mouth of the Gulf. 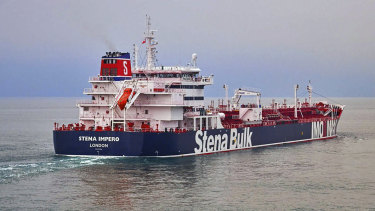 The tanker's operator, Stena Bulk, said in a statement the ship was no longer under the crew's control and could not be contacted.

Iran's state news agency IRNA quoted a military source as saying the vessel had turned off its tracker, ignored warnings from the Revolutionary Guards and was sailing in the wrong direction in a shipping lane.

"The rule of retaliation is something that's recognised within international law and is used in relation to wrong measures taken by a government," Iranian Guardian Council spokesman Abbasali Kadkhodaei told IRNA.

British Foreign Secretary Jeremy Hunt called the capture "unacceptable" and said he would be attending an emergency meeting of top officials to discuss the crisis.

"We will respond in a way that is considered but robust and we are absolutely clear that if this situation is not resolved quickly there will be serious consequences," Hunt said. 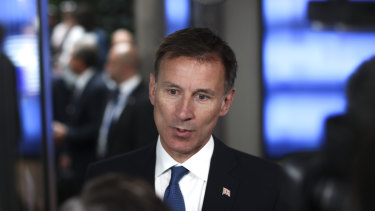 He said Britain was "not looking at military options, we are looking at a diplomatic way to resolve the situation."

Stena Bulk said the ship was "in full compliance with all navigation and international regulations."

"There are 23 seafarers onboard of Indian, Russian, Latvian and Filipino nationality," said Erik Hanell, president and chief executive of Stena Bulk. He said there had been no reported injuries.

The Mesdar had turned sharply north toward Iran's coast on Friday afternoon but then changed course again and headed westward away from Iran, according to Refinitiv tracking data. 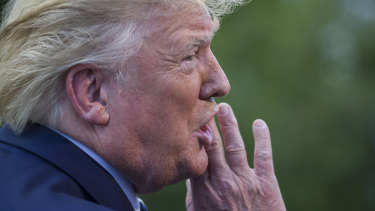 US President Donald Trump says he’ll talk to the UK.Credit:AP

Relations between Washington and Tehran worsened last year when US President Donald Trump abandoned a 2015 nuclear deal between world powers and Iran. Under the pact, Iran agreed to restrict nuclear work, long seen by the West as a cover for developing atomic bombs, in return for lifting sanctions. But sanctions have been imposed again, badly hurting Iran's economy.

Trump said he would be "working with the UK" and suggested the latest developments justify his harsher approach toward Tehran. "This only goes to show what I'm saying about Iran: trouble, nothing but trouble."

Relations between Iran and the West have been increasingly strained in recent months over security in the Gulf, US sanctions on Iran and Tehran's nuclear program.

Military incidents in the Gulf have increased international concern that both sides could blunder into a war in the strategic waterway, which is vital to world oil supplies.

On Friday night, US Central Command confirmed it was putting in place "a multinational maritime effort" called Operation Sentinel that would "increase surveillance of and security in key waterways in the Middle East to ensure freedom of navigation in light of recent events in the Arabian Gulf region."

It also confirmed it was sending forces back to Saudi Arabia including fighter aircraft, air defence missiles and likely more than 500 troops, to an air base that became a hub of American air power in the Middle East in the 1990s but was abandoned after the US toppled Iraqi strongman Saddam Hussein in 2003.

The Saudi Foreign Ministry announced the basing late on Friday, Riyadh time, without mentioning details. US Central Command said the deployments had been approved by the Pentagon and has been in the works for many weeks.

Putting American combat forces back in Saudi Arabia, after an absence of more than a decade, adds depth to the regional alignment of US military power, which is mostly in locations on the Persian Gulf that are more vulnerable to Iranian missile attack.

But it also introduces a political and diplomatic complication for the Trump administration, accused by critics of coddling the Saudis even after the murder last year of dissident writer Jamal Khashoggi by Saudi agents. Many in Congress now question the decades-old US-Saudi security alliance and oppose major new arms sales to the kingdom.

Iran shot down a US drone in the Gulf in June and British naval forces seized an Iranian tanker in Gibraltar on July 4 on suspicion of smuggling oil to Syria.

The US military said on Friday that unarmed surveillance aircraft were in international airspace, monitoring the Strait of Hormuz and had been in contact with US ships in the area.

"We have patrol aircraft operating in international airspace monitoring the situation within the Strait of Hormuz," said Lieutenant Colonel Earl Brown, a US Central Command spokesman.

Trump said on Friday there was no doubt the US Navy warship Boxer had destroyed an Iranian drone but Tehran showed video footage that it said disproved the incident even happened.

Iran said all of its drones were accounted for.

"All drones belonging to Iran in the Persian Gulf and the Strait of Hormuz … returned safely to their bases after their mission of identification and control," Abolfazl Shekarchi, a senior Iranian armed forces spokesman, was quoted by Tasnim as saying.

He said there was no report of any "operational response" by the Boxer and Iran's state television broadcast a video showing aerial views of ships that it said disproved the US assertion.

The television station said the footage, which came from Iran's Revolutionary Guards, and the timing notations indicated the pilotless aircraft was still filming after Washington said it had been downed.

Speaking about Iran, he said the United States hoped "for their sake they don’t do anything foolish. If they do they will pay a price like nobody has ever paid a price.”

The United States has blamed Iran for a series of attacks since mid-May on shipping around the Strait of Hormuz. Tehran rejects the allegations.