An Asda security guard took breaking coronavirus social distancing rules to another level by manhandling an angry shopper out of a store.

The customer can be heard shouting ‘what are you doing?’ in disbelief as he is grabbed by the t-shirt and forced outside – despite continued guidance for people to remain at least two metres apart in public – in shocking footage filmed yesterday.

An onlooker caught the incident on camera at the supermarket giant’s branch in Tunbridge Wells, Kent, having heard a man shout: ‘Get out of my face, I’m a customer.’

The video begins by showing the shopper standing in the shop doorway as he points towards the car park while talking to the security guard.

The employee is seen pointing behind him but the man shakes his head in apparent refusal.

The security guard then moves towards him and the shopper backs away and says again: ‘Get out of my face!’ 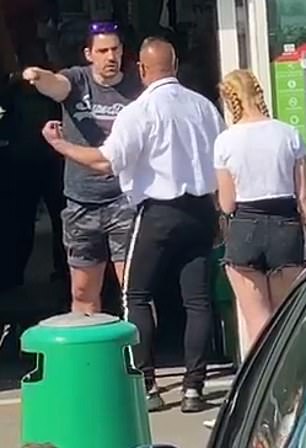 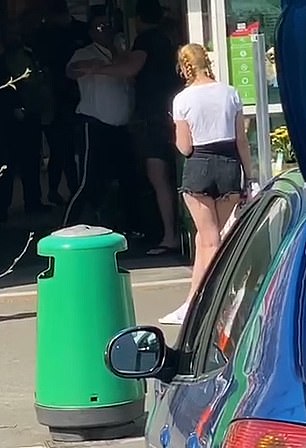 An Asda security guard broke coronavirus social distancing rules by manhandling a shopper after the pair had an altercation. Rikki Lanzarotti, 31, who works for a medical insurance broker, filmed the bust-up at her local Asda supermarket in Tunbridge Wells, Kent, this afternoon

However, the security guard grabs his arm, prompting the shopper to push back and shout, ‘what are you doing?!’, as the pair grapple in the entrance to the store.

After a few seconds, the guard forces him outside, with the shopper shouting again, ‘what the f*** are you doing?!’

Once the pair are outside, the shopper demands that the security guard tell him his name, but the man does not do so.

The guard is then seen talking to an Asda member of staff, who appears to gesture at the man to move away.

The footage was captured by Rikki Lanzarotti, 31, who works for a medical insurance broker. 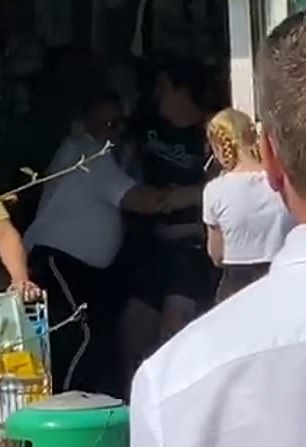 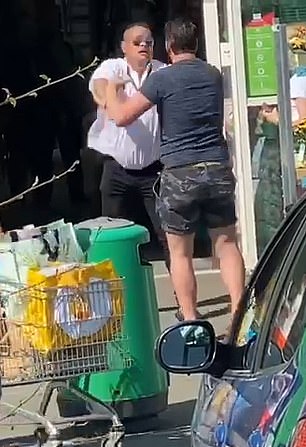 She said she started filming when she heard the man who ended up being forced out of the store shout, ‘get out of my face! I’m a customer’. The security guard was then seen trying to force the man out of the store

She told MailOnline: ‘I was leaving because it was so busy. I heard this guy go ‘get out of my face, I’m a customer’.

‘I started filming and then it all went off like that, it was so surreal.

‘If that was me I would want to call the police. A woman led him off to the side.’

She added: ‘In this situation you shouldn’t be manhandling anyone. The guy wasn’t threatening or anything.’