An injured wild dog escaped the snapping jaws of a pride of angry lions after it played dead until they walked away.

Astonishing footage shows two wild dogs bounding into the pride as the lead male feasts on the carcass of a wildebeest for breakfast.

The lions pounce, snatching the lead dog and pinning it to the ground, while the second leaps backwards and dodges the danger.

The captured dog squeals, footage shows, and a lion appears to crunch on its bones. But, when it stops moving, they begin to walk away.

‘It’s dead,’ said a self-assured guide. Moments later, however, the dog lifted its head before leaping up and racing back into the undergrowth.

Tourists spent the day searching Khwai reserve in Botswana for the lucky dog before it was spotted ten hours later limping back to its den. The dog had suffered deep wounds to its right hind leg and ribs.

It hung on for a few more weeks before succumbing to its injuries, guides said. The animal ran into the pride of lions while it was chasing an impala. 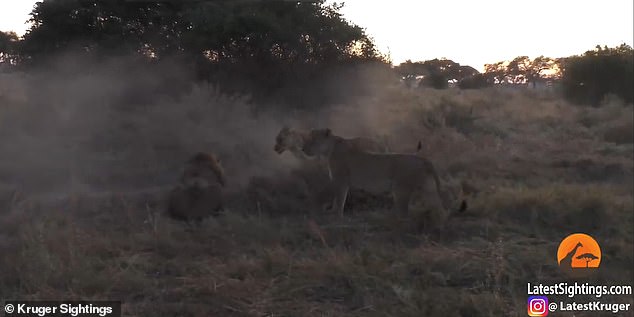 This is the astonishing moment a pride of lions pounces on a wild dog after it interrupts their breakfast in Khwai reserve, Botswana. They were feasting on a wildebeest 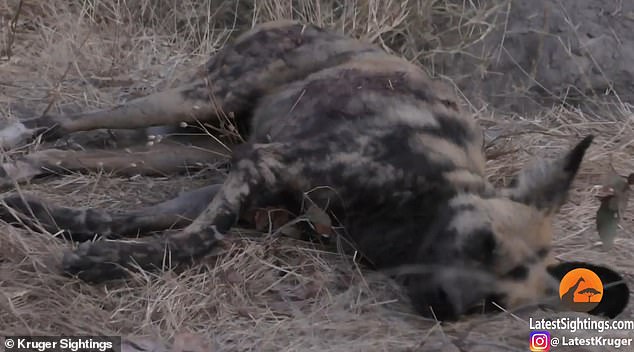 After playing dead the wild dog escaped. It suffered injuries to its right hing leg and ribs

The stunning footage revealed the dogs had run into a pride numbering two males, three females and some cubs.

The group had been heading to the wild dog’s den, which was nearby, at the time when their guide spotted a group of jeeps and said they should find out why they had all stopped there.

German tourist Klaus Boehmer, in his 50s, captured the encounter on film while travelling with his teenage daughter Kira.

‘It was my fourth trip (to Africa),’ he said. ‘(We chose) Khwai because it is known for its healthy population of wild dogs, my favourite animals.

‘Right on our very first game drive our mobile safari camping guide “Master” was able to show us the den of the local park, a half-hour drive from our camp. 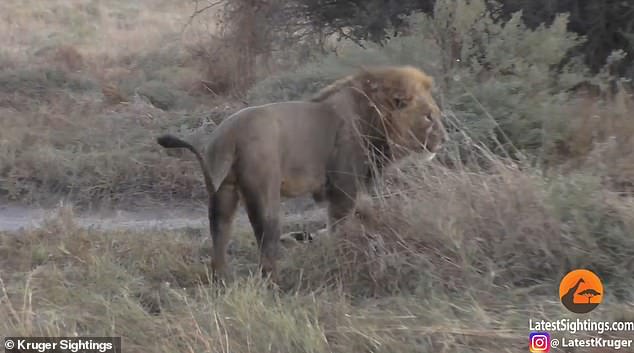 The wild dog played dead until the lions walked away. After it escaped tourists found the animal ten hours later limping back towards its den in the park 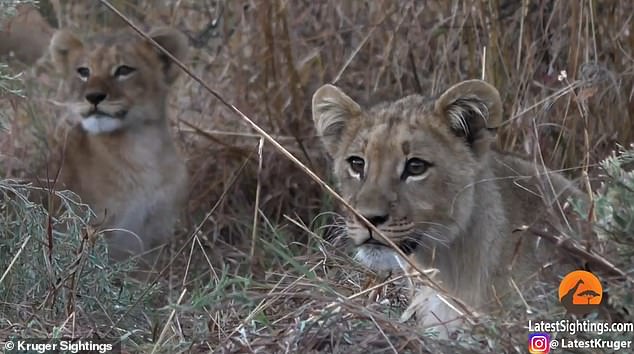 The pride of lions numbered two males, four females and lots of cubs 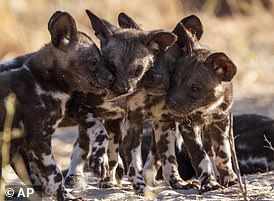 A pack of wild dogs in the Serengeti

Diet: Carnivorous. They hunt in packs to bring down antelopes

Key feature: The animals have four toes on each paw instead of five

Describing the moment the dogs bounded in, he added: ‘For a minute or so all one could hear were the sounds of the animals in front of us.

‘I am sure none of us, not even the veterans of the guides, had witnessed anything remotely similar before.

”Most of us were happy for the dog to escape, after all, it is only human to cheer for (in this case literally) the underdog.’

Wild dogs are endangered, according to the IUCN, due to human activity and their competition with other animals.

As they rely on the same food sources, this means that wild dogs often have to be quick to consume their kill before it is taken by another animal – or get the last pickings at a carcass.

Wild dogs hunt in packs and are known to target large herbivores such as impala and antelope.

However, the animals will also go for small rodents should they get the chance.