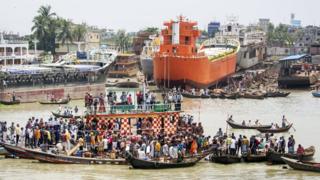 At least 25 people have died and many more are missing after a ferry capsized in Bangladesh, near the capital Dhaka.

Rescue officials said the ship, the Morning Bird, overturned after a collision with another vessel in the Buriganga river, close to the country’s largest river port, Sadarghat.

Local media reports said the ferry came from a village in the centre of the country and had about 50 passengers.

Ferry accidents are frequent in Bangladesh because of overcrowding.

There are also poor safety standards in the country’s many shipyards and ferries often sink in bad weather.

Witnesses told local television stations that many passengers were stuck in cabins on the ferry following the collision.

Images from the scene showed large numbers of bodies in white bags which had been retrieved from the stricken vessel.

Reports said the ferry sank as it attempted to moor at Sadarghat, Dhaka’s main river port, which is used by hundreds of boats to travel to the country’s south.

Abul Khair, a diver in the fire brigade, told the AFP news agency that rescuers had collected at least 30 bodies, including several children.