GRAND RAPIDS, Mich. (Reuters) – At his first political rally since the end of the Russia collusion probe, President Donald Trump on Thursday accused backers of the investigation of trying to overturn the 2016 election and attempting “illegally” to claim power. 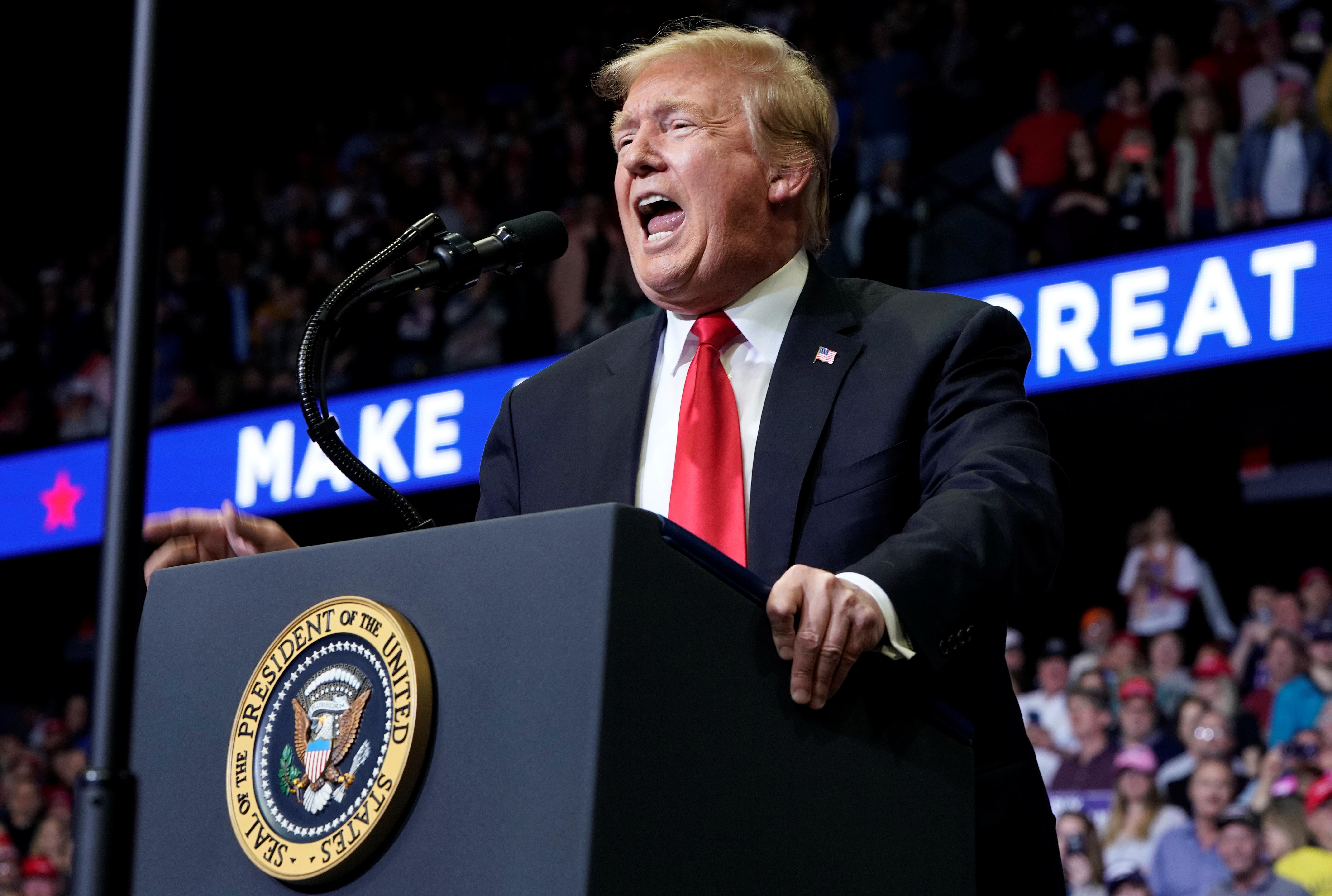 Declaring the country “hurt” by the probe, Trump called his opponents “losers” and celebrated the fact the investigation had come to a close.

“After three years of lies and smears and slander, the Russia hoax is finally dead. The collusion delusion is over,” he told a crowd of thousands at a Grand Rapids arena.

“The Russia witch hunt was a plan by those who lost the election to try and illegally regain power by framing innocent Americans – many of them, they suffered – with an elaborate hoax,” he said.

On Sunday, U.S. Attorney General William Barr released a summary of Special Counsel Robert Mueller’s more than 300-page report about his investigation into Russia’s role in the 2016 election. The investigation did not establish that members of Trump’s campaign conspired with Russia during the election.

The findings delighted the president and his inner circle, who spent the first two years of his administration confronting a cloud of suspicion over how the New York businessman and political novice won the White House.

With that cloud largely lifted, Trump has let loose, calling out those who supported the investigation and referring to evil acts of treason by his opponents.

Trump revisited that theme at the rally, knocking the media and Democrats and calling for accountability.

“These are sick people and there has to be accountability because it’s all lies and they know it’s lies,” Trump said.

For the president, the rally capped off a week of rejoicing in the results of the investigation he had repeatedly called a “witch hunt,” and stewing over its origins.

Advisers to Trump, who is not known to let go of grudges easily, have debated the merits of going after the president’s opponents and those he blames for sparking the investigation versus claiming a win, moving on and using the momentum of good news to bolster his bid for re-election.

In the packed, noisy arena in Michigan, a political swing state that Trump wants to win again in 2020, the view of the crowd was clear.

Thousands of supporters, many of them wearing red “Make America Great Again” hats, cheered as the president railed at his opponents.

But they seemed as eager to cheer him over policy issues, applauding loudly when he assured them he was building a wall along the U.S. border with Mexico and promised to secure the border.

The industrial state along with Pennsylvania and Wisconsin, helped propel Trump, a Republican, to his improbable victory in 2016.

The crowd’s enthusiasm underscored the risks to Trump of going too far expounding on his chagrin over the Mueller probe. Some advisers feel his best bet is to focus on the strong economy and success in enacting administration priorities like the tax overhaul.

Democrats were not satisfied with Barr’s determination and have demanded to see the report in full. Some Republicans, including Trump himself, have also voiced support for releasing it.

Trump faces other investigations into his personal and business affairs from Democratic lawmakers, who now control the U.S. House of Representatives.

But Democrats also risk alienating voters weary of the Russian probe. Trump told the rally his opponents now had to decide whether to keep up their “partisan investigations” or apologize to Americans and focus on issues like infrastructure and healthcare.