Chicago Bears fans got their wish. The Matt Nagy era is over. And general manager Ryan Pace is out, too.

"Fire Nagy" was the rallying cry everywhere in Chicago as the Bears' season went south. Nagy, who barely survived after last season, couldn't afford another losing season. But the Bears went on a losing streak after starting 3-2, with some frustrating losses along the way, and the calls for Nagy's job were tough to ignore.

Nagy was fired on Monday morning, a day after his fourth season as the team's coach ended, according to ESPN's Adam Schefter. That's a quick fall from grace for a coach who started off his Bears career with a bang. The Bears finished 6-11 after a season-ending loss to the Minnesota Vikings, which also fired their coach Mike Zimmer on Monday morning. Nagy did finish his four seasons with a winning 34-31 record, but not enough progress was being shown to justify a fifth season.

The team will also search for a new general manager over the offseason. Pace leaves the team after putting up a 48-65 record in seven seasons as general manager. Pace's tenure was filled with spotty draft decisions, including selecting Kevin White in the first round in 2015 and trading a massive haul to move up one spot to take Mitchell Trubisky in 2017. Pace also handed out $18 million to Mike Glennon and $10 million to Andy Dalton in free agency.

Bears fans weren't always displeased with Nagy. In Nagy's first season as head coach, the Bears went 12-4 and won the NFC North. Nagy was named NFL coach of the year. Chicago thought it had a fresh new star on the sideline.

Not much went right after that, and fans started to wonder if defensive coordinator Vic Fangio was the real reason for that division title. The Bears went 8-8 in Nagy's second and third seasons. Trubisky, the No. 2 overall pick of the 2017 draft, never developed. The Bears' offenses under Nagy, who got the job due to his work as Kansas City Chiefs offensive coordinator, never showed enough explosiveness or creativity.

At the end of the 2020 season, Nagy and Pace were on the hot seat. The Bears had to announce those two were returning, to go with a media conference and statements that the Bears' brass understood fans' frustrations with the decision.

"After one particularly dispiriting loss this season, a season-ticket holder sent me an email that read: 'Fire somebody. We deserve better,'" Bears chairman George McCaskey said after the 2020 season. "I get it. You deserve your Bears being winners. The decisions we're announcing today might not be the easiest or most popular, but we believe they're the best decisions for the Bears."

That was the backdrop for the 2021 season. It was going to be nearly impossible for Nagy to succeed, and he didn't. 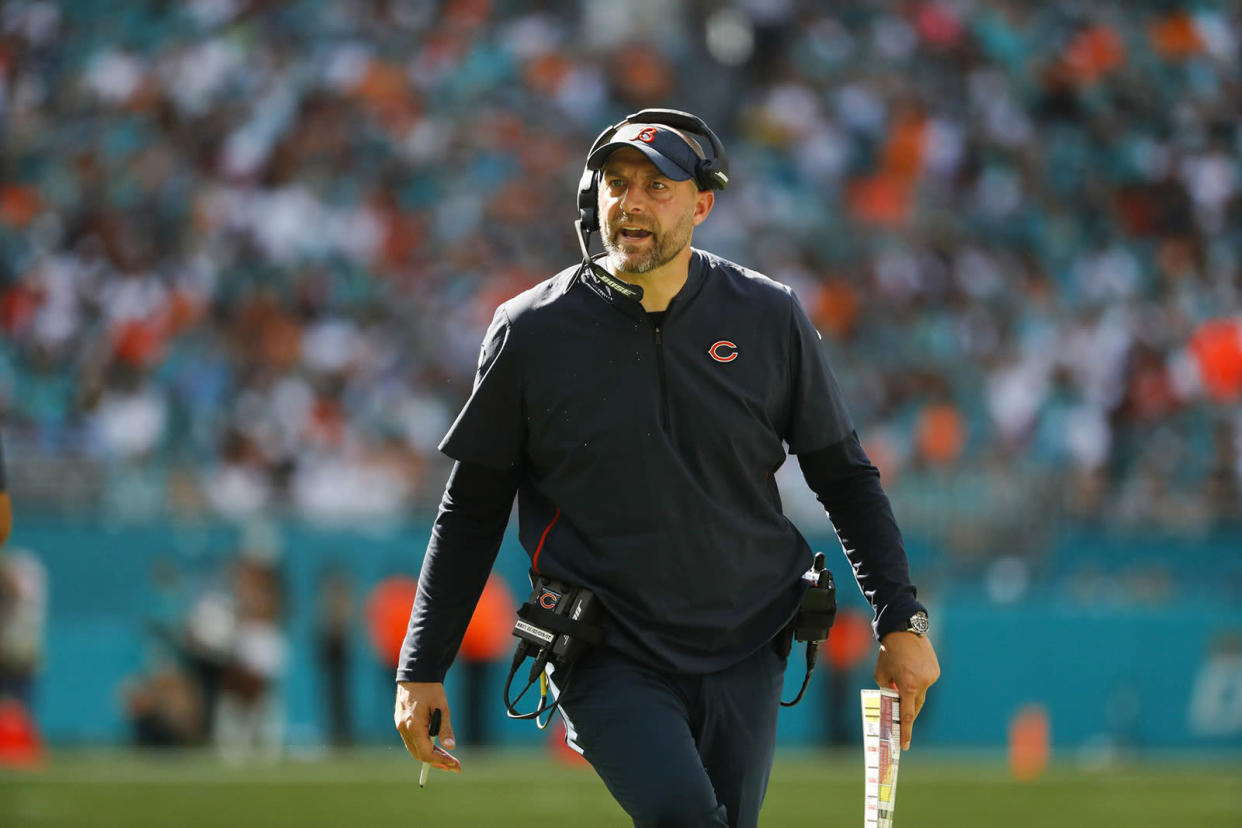 Nagy was already on a very hot seat when he stubbornly refused to start rookie quarterback Justin Fields to begin the season, or even entertain the idea. That didn't endear him to frustrated Bears fans who were excited to see the first-round pick.

The season started fine, but then came a losing streak. Bears fans were particularly upset after a Week 11 game in which Chicago faced the Baltimore Ravens without Lamar Jackson, who was out due to illness, and gave up a long touchdown drive in the final two minutes to backup Tyler Huntley to lose. That was the Bears' fifth straight loss. The fans chanted "Fire Nagy," and Chicago fans did the same at a Bulls game the day after the Ravens loss. The season never got better after that, and included back-to-back ugly losses in prime time to the Green Bay Packers and Minnesota Vikings. A comeback win over the Seattle Seahawks in Week 16 nor a Week 17 win over the hapless New York Giants was not enough to save him.

The Bears job has some pluses, like a young quarterback who has shown some ability as a rookie, and a fanbase that is among the NFL's most passionate. The Bears also haven't won a Super Bowl since 1985, so the bar isn't too high for whoever gets the job.

The Bears keep waiting for a turnaround. Maybe their new coach can lead the way.