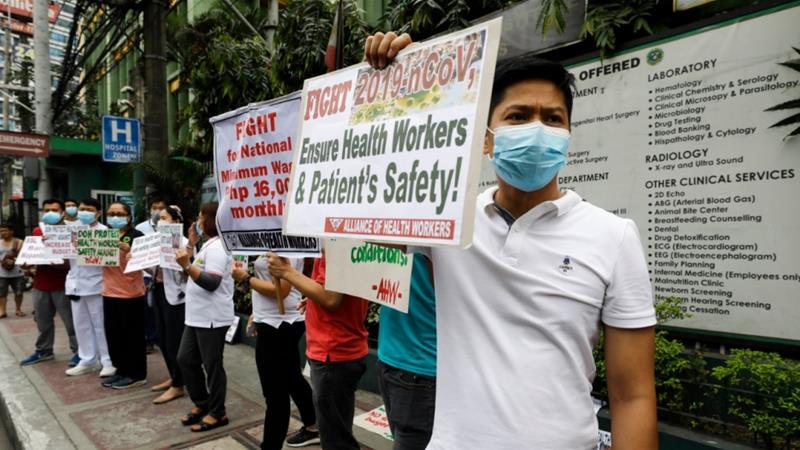 Manila, Philippines – Joaquin Sapul, Jr started getting the frantic calls a few hours after the health department announced the first coronavirus case in Iloilo City in the central Philippines on March 21.

In response, The Medical City-Iloilo, the hospital where Sapul works and where the unnamed patient was confined, issued a statement to assure the public that stringent measures were in place to ensure the safety of the patient and their staff.

“At least six nurses were messaging and calling me, crying. Their landlords were evicting them. Some were being prevented from leaving their homes by their village captains,” said Sapul, a nurse and chief patient services officer at the hospital.

It was evening by the time Sapul had finished arranging temporary sleeping arrangements for the displaced workers. He was preparing to go home when he read a message from his own landlord, asking him to look for another place to live.

Sapul worked it out with his landlord after a lengthy explanation about rigid infection-control protocols and his own safety practices, but “it still hurt,” he said.

“We healthcare workers have always enjoyed the trust of our community. I underestimated how hysteria could make them turn on us so quickly,” said Sapul.

In the days that followed, hospital staff, including cleaners were told to vacate their homes, denied public transport or refused service in nearby eateries. One street stall hung up a sign saying that they would not serve hospital workers.

As of April 1, the Philippines had 2,311 cases of coronavirus, also known as COVID-19, the second-highest number in Southeast Asia. There have been 96 deaths, 17 of whom were doctors. On Tuesday, the health department reported 538 new cases, the highest in a single day.

Amid the rising number of coronavirus cases and mounting fears of infection, healthcare workers are caught in the middle, facing harassment and discrimination.

Last Friday, two men on a motorcycle threw chlorine on a nurse as he made his way home through Cebu, in the central Philippines.

The next day, a healthcare worker in Sultan Kudarat in the island of Mindanao reported being attacked by a group of five men who threw bleach on his face as he was crossing the street on his way to the hospital where he worked.

“These acts of violence cannot be tolerated,” the health department said, condemning the incidents in a statement.

According to the World Health Organization, healthcare workers may become targets of violence during disaster and conflict situations. As many as 38 percent of healthcare workers are likely to experience violence at one point in their professional life, with nurses and those involved in direct patient care most at risk.

“Healthcare workers are exhausted and frustrated by the lack of support from the government in providing them even basic protective gear. If we do not put a stop to this harassment, nurses may resign,” said Reigner Antiquera, president of Alliance of Young Nurse Leaders and Advocates.

Photos of nurses and hospital staff resorting to using rubbish bags and motorcycle helmets as protective gear went viral on social media, prompting an outpouring of donations of cash and protective gear from citizens and private corporations. 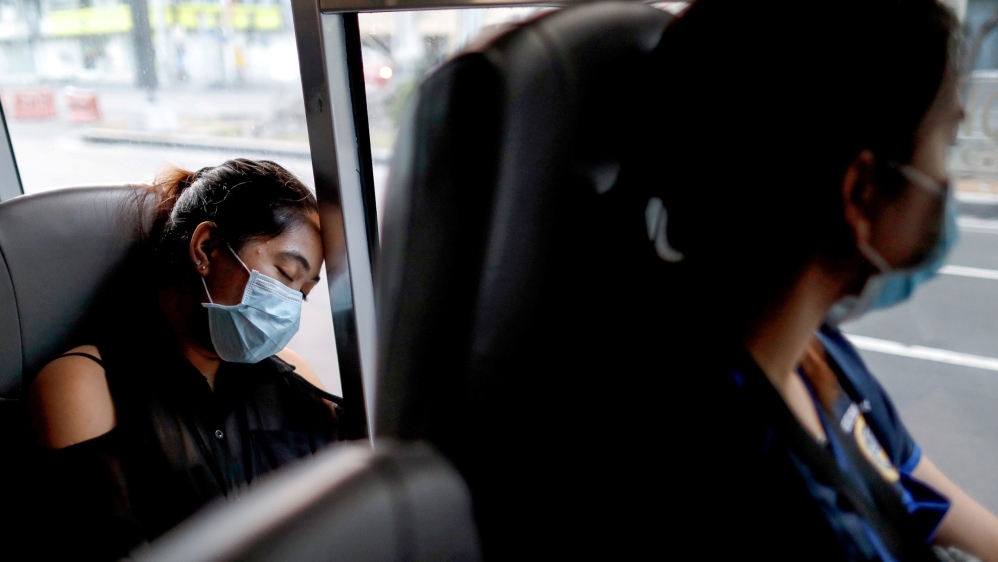 On March 17, President Rodrigo Duterte implemented a one-month period of enhanced community quarantine on the main island of Luzon to curb the spread of the coronavirus. Public transport was suspended, commercial establishments closed and checkpoints manned by police and military set up along city borders to ensure compliance.

Other provinces have since instituted their own version of the community quarantine, effectively putting the whole of the Philippines – a nation of about 104 million people – on lockdown.

The coronavirus is stretching an already burdened and crumbling healthcare system and has exposed the under-staffing and dire working conditions in the health sector, particularly for nurses.

A study on the country’s health system shows the Philippines has about 187,540 healthcare workers, almost half of them nurses. Nurse-to-patient ratios are at a low of 12.6 nurses per 10,000 people. In rural areas, the number goes down to 4.2 nurses.

The average salary for a nurse in a government hospital is about $250 to $350 per month. In private hospitals, it ranges from $200 to $250 per month. In October last year, the Supreme Court set a minimum monthly salary for nurses in public hospitals of $600 per month but the decision has still to be implemented.

“I can tell you that no nurse is making that amount,” said Robert Mendoza president of the union group Alliance of Health Workers.

The health department made an urgent call for healthcare volunteers to assist in the coronavirus response, offering 500 Philippine pesos ($10) a day for a one-month commitment.

The health department said it would review its compensation package after the plea triggered a social media backlash as netizens and health workers alike expressed widespread indignation.

Despite the criticism, almost 700 healthcare workers had signed up as volunteers as of Sunday, the department said. 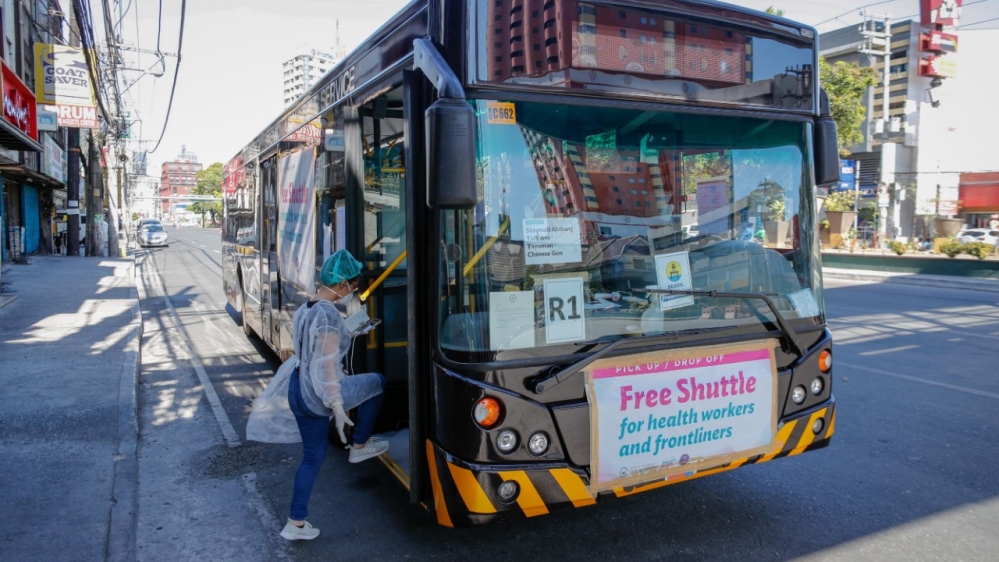 While undervalued at home, Filipino nurses are in demand in other countries looking for qualified people to staff hospitals and care facilities for the elderly.

Government data shows that an average of 19,000 nurses a year left the Philippines to work abroad between 2012 to 2016.

The Philippine Labour Department’s website acknowledges that the overseas pay scale “is way above local rates” and cites the average salary in the countries where most of the nurses choose to go. In the US, nurses can make an average of $3,800 per month.

‘The nurses are not ours’

The recent announcement of at least 75 nurses going to Germany on a “special recruitment flight” to assist in the country’s coronavirus response was met with mixed feelings – of anger that they were leaving and a sad acknowledgement that the conditions in the Philippines made their departure inevitable.

But Silvestre Bello, the labour secretary, said the deployment was now on hold until further notice. “Our nurses are needed more at home.”

That may be so but until their working conditions are improved, they will continue to go abroad, critics say.

“We do not SEND our nurses abroad. Our nurses are not ours. We especially we f*****g public servants do not deserve to call them ours. We never helped them. They have to flee our F*****G country for lands that value them.”

“You cannot blame nurses for wanting to leave a country that does not value our profession,” said Alvin Dakis, a nursing practitioner and consultant.

“Most nurses come from low- to middle-income families. Their families influence them to study nursing as a stepping stone to go abroad. It’s an investment in a future breadwinner,” Dakis explained.

Union president Mendoza said given a choice most nurses would want to stay, especially during a crisis like the coronavirus.

“We know our country needs us. All we are asking for us is a living wage. We need to give our nurses a reason to stay.”

A nurse at a government hospital in Manila was saddened when she heard the news about the harassment of healthcare workers. In her 21 years of being a nurse, she said she had never seen anything like that until the coronavirus crisis happened.

During the early onset of the pandemic, she had already noticed passengers looking at her from head to toe and then moving away from her when she boarded the bus for her two-hour journey home.

The years of long hours and low pay were a wound that she had long nursed in restrained silence, but the virus outbreak and the government’s handling of the crisis added to her pain.

She has a long list of grievances – from the lack of protective gear to the reluctance of the health ministry to have healthcare workers tested despite legislators apparently being able to use their influence to get tested quickly, and now the harassment.

“We are at the front lines, taking care of patients and it is us who they want to hurt and shame? What if we decided to mount a mass boycott, what would they do without us?” the nurse said, asking that she not be named.

This week, the health ministry announced that it had revised its policy and would now test medical workers showing symptoms of the disease.

Addressing the nation on Monday, Duterte called health workers heroes who were “lucky to die for their country”.

The nurse found the statement insensitive and offensive.

“Oh, so now, we’re heroes because we might die. We were heroes long before COVID19.”