It took 21 years for Myanmar's now de facto leader, Aung San Suu Kyi, to finally accept her Nobel peace prize after many years under house arrest. During her acceptance speech, she talked about how "wherever suffering is ignored, there will be the seeds of conflict, for suffering degrades and embitters and enrages". For the Rohingya people of her country, these were prescient words.

Last week, Ms Suu Kyi found herself at the International Court of Justice at The Hague defending her country against accusations of genocide. The case against Myanmar, brought by the tiny African nation of Gambia, centres on the more than 700,000 Rohingya Muslims forced to flee to Bangladesh in 2017 after systematic "clearance operations" led by the military. The allegations rely on a UN fact-finding mission which described soldiers in the Myanmar state of Rakhine firing indiscriminately into houses and fields, houses set on fire with people locked inside, mass rapes, and children thrown into rivers and onto fires. 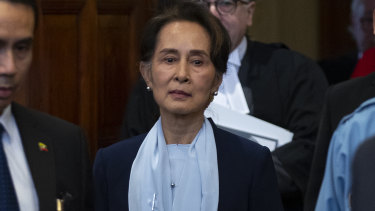 The military operation flared after many years of tensions between the state’s two largest groups, the Rakhine Buddhists and the Rohingya Muslims. The Rohingya minority have long suffered discrimination in the form of severe travel restrictions, limited access to education and Myanmar's unwillingness to give them citizenship, in effect making them stateless. When frustrations among the Rohingya led them to attack a military base in 2017, the response from Myanmar was devastating.

The detail in the UN report is horrific: "Houses were locked and set on fire … Bodies were transported in military vehicles, burned and disposed of in mass graves. Large-scale gang rape was perpetrated by soldiers in at least 10 village tracts … sometimes up to 40 women and girls were raped or gang-raped together."

And Suu Kyi's response at The Hague? She said it was an internal armed conflict, started by attacks by the Rohingya. “Tragically, this armed conflict led to the exodus of several hundred thousand Muslims." She said that if human rights violations had been committed, they would be dealt with by Myanmar’s justice system. “There will be no tolerance of human rights violations in Rakhine or elsewhere in Myanmar.”

Her appearance has been justifiably attacked by many. Paul Reichler, one of Gambia's lawyers, dismissed her insistence Myanmar should be allowed to probe the allegations itself: "How could anyone expect the Tatmadaw [Myanmar military] to investigate when six of its top generals … have all been accused of genocide by the UN fact-finding mission?"

It could take years before a ruling is made on whether genocide occurred in Myanmar, but the verdict on Suu Kyi will come much sooner. For her to stand before an international court and dismiss horrendous accusations concerning a military force with such an appalling human rights record that has ruled the country with an iron fist for decades, including locking her up for 15 years under house arrest, completely undermines the high-minded words she once spoke as the recipient of the Nobel peace prize.

Suu Kyi's late father, Aung San, is still revered within Myanmar as the nation's father of independence from the British and founder of the modern-day Myanmar armed forces. You must wonder what Aung San would make of that military today with such a long track record of abuses against its own people, and what he would make of the fact that his own daughter is now so willing to defend that record.