Will sparks fly? Aunt is zapped on the nose with an electric fly swatter in family prank

A daring aunt let her nose be shocked by an electric fly swatter as part of a ‘hilarious’ stunt between family members.

Jamie Ambrose, filmed the moment her aunt Karen was zapped by the fly swat in their kitchen in Chelmsford, Essex.

Speaking about the incident Jamie said: ‘Karen found it hilarious. Her and my uncle started shocking each other. 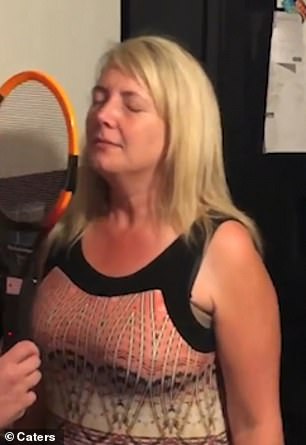 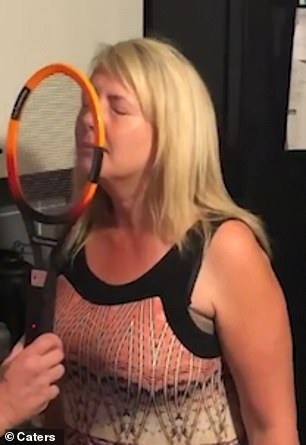 Jamie Ambrose filmed her aunt Karen (pictured) close her eyes (left) and prepare for the electric swatter as it moves (right) closer while at their home in Chelmsford, Essex

‘I recorded the video because my whole family were in hysterics laughing at Karen and my Uncle.’

As Karen taps her face in the short clip she says ‘be gentle, put it on and then do it.’

The person holding the swatter, thought to be Jamie’s uncle, then moves in closer and Karen closes her eyes in preparation.

He places the swatter on Karen’s nose and after a second sparks can be seen coming from the zapper.

Karen’s flings her head backwards and screams from the shock of the electric swat. 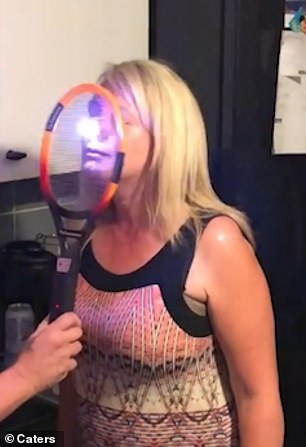 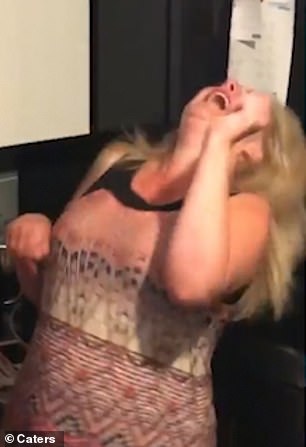 She then reaches one hand to her face as she stumbles forward towards the camera.

At the end of the video she can be seen clutching her nose and walking to the other side of the kitchen.

The rest of the family who had been watching the dare and recording Karen’s electric shock take place can be heard laughing as the clip ends.