Tham Luang, Thailand: Whether it’s after a tsunami, a cyclone or an earthquake, Australia has a long, proud history of sending assistance to our neighbours in their time of need.

And in the far north-west of Thailand on the Myanmar border, once again, a team of nine Australians – including six federal police divers as well as ADF and Foreign Affairs staff – are on site and doing what they can to help rescue the young Thai soccer team trapped deep inside the Tham Luang cave complex. 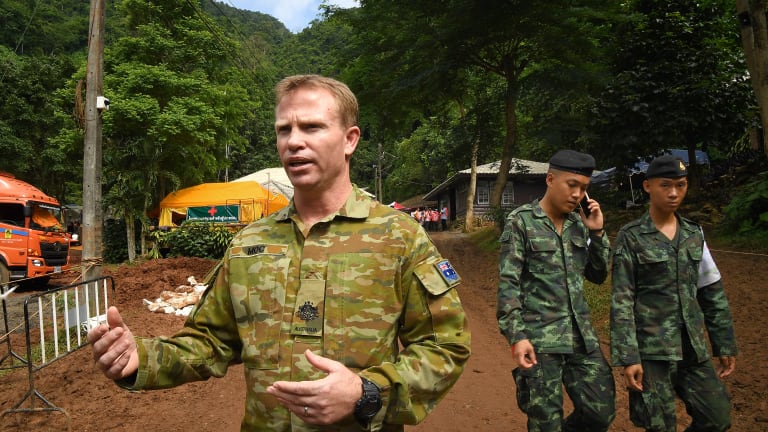 Australian military warrant officer Chris Moc at the base camp where the rescue operations are being planned.

The federal police divers arrived in Thailand late on Saturday evening to join the international search effort to find the 12 missing Thai boys, aged 11-16, and their 25 year old team manager.

That search effort was miraculously transformed into a rescue effort when two British divers, John Volanthen and Richard Stanton, located the missing kids on Monday evening.

And while it remains unclear when – or how – the boys will be freed, search efforts were ramping up on Wednesday as the world watched and waited.

ADF Warrant Officer Chris Moc, who is serving as a liaison officer for the Australian military at the base camp for the rescue operation, said it was possible more Australians could send more people to assist in the rescue effort.

It’s a fairly long and arduous route to where the children are [inside the cave], so they need to place supplies all the way along.

“We are continuing to provide assistance to the Thai government in whatever role we can. We have a specialist dive team here from the AFP and they have been helping the Royal Thai Navy Seals and other international teams transport supplies into the cave.”

“It’s a fairly long and arduous route to where the children are [inside the cave], so they need to place supplies all the way along that route to maintain the guys that are coming in

Getting supplies deep into the cave – estimates vary, but the boys are said to be between 2km to 4km inside the warren of flooded caverns – make the job that much harder. 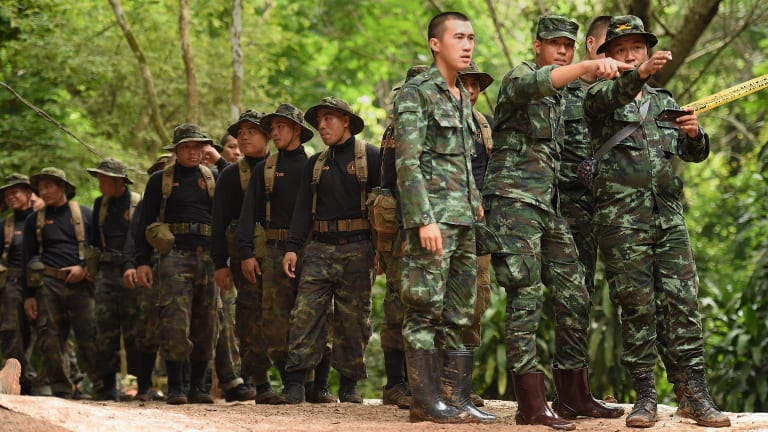 Thai army soldiers at the base camp.

That’s where the Australian divers have helped out, Mr Moc said

“In military terms we call it a daisy chain. So one person will go to a certain point and emplace there. And then one person will move that to the next point. So there are several staging points along the route and you need supplies at each of those points to maintain the divers in the cave.” 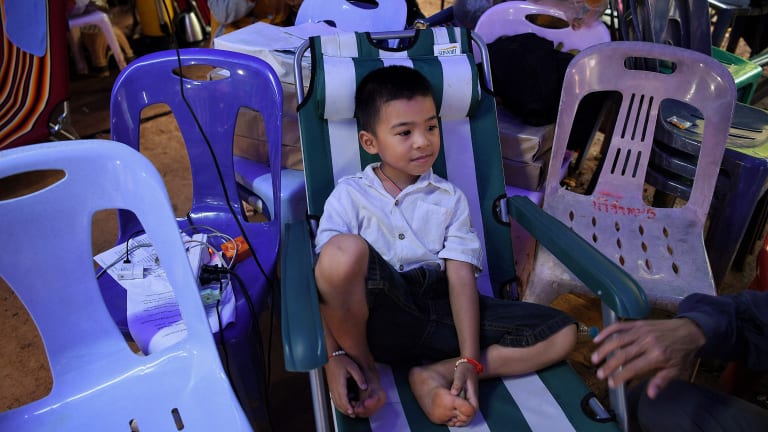 Beam Wongsookjan, 5, watching footage of his brother of Akekarat Wongsookjan 14, who is trapped in the cave.

In addition to the six specialist police divers, Australia had also provided some specialist diving equipment to the Thais.

Liaison officers from the ADF, AFP and the Department of Foreign Affairs are also onsite, taking to nine the official Australian government contingent.

Mr Moc said he was sure the Thai government would choose the safest method possible to get the boys out and while the forecast rain had held off and water in the cave had reduced by pumping, as noon approached on Wednesday, “because of the unevenness of the cave [floor] it doesn’t drain”. 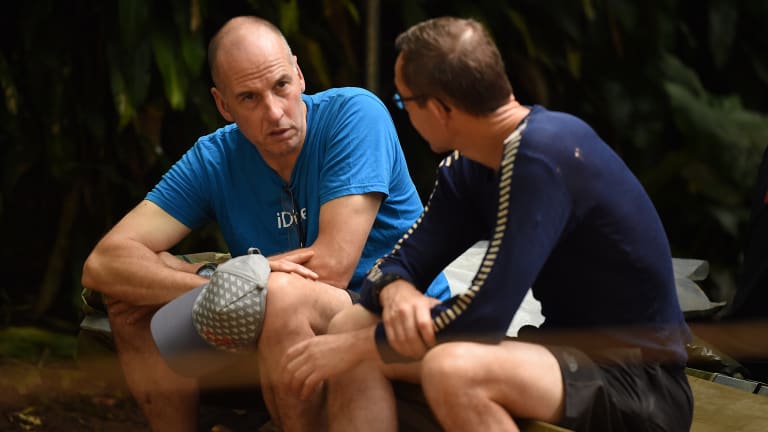 AFP Sergeant Peter Southwell, who is also on location, said coordinating the logistics of the rescue efforts – which involved multiple countries and multiple languages – was a feat in itself.

Australia’s divers had close water and black water experience, he said, and were doing what they could to support the Royal Thai Navy Seals by supplying oxygen cylinders, food supplies and their expert diving skills.

As to question on everyone’s lips – when will the rescue take place – Sergeant Southwell demurred.

“At the moment I know the Royal Thai Navy Seals are still in the planning stages of that. They are exploring multiple options and then each of those options has different contingencies. And for our capability, we are just trying to assist where possible.”