Australia should be more ambitious with its diplomatic agenda, raise human rights issues with other nations more regularly and be more self-confident, three of the country's most respected former foreign ministers have said.

In interviews with the Sydney Morning Herald and The Age, Gareth Evans, Kevin Rudd and Julie Bishop shared their thoughts about the direction of the country's foreign policy. 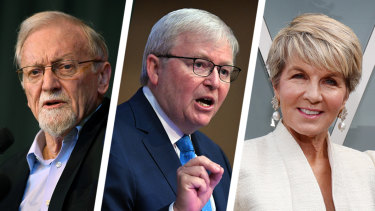 Their comments come at a time when Australia's handling of high profile consular cases, such as refugee footballer Hakeem al-Araibi and jailed Chinese-Australian writer Yang Hengjun, has been questioned by human rights groups. Three Australians – Melbourne University academic Kylie Moore-Gilbert and travel bloggers Mark Firkin and Jolie King – have been detained in Iran.

Australia is also navigating an increasingly complex environment in which two great powers, China and the United States, are at loggerheads and seeking to influence economic and political developments in south-east Asia.

"The current government’s attitude to our place in the region and the world is driven by one organising principle, which is that it is an extension of domestic politics by other means." 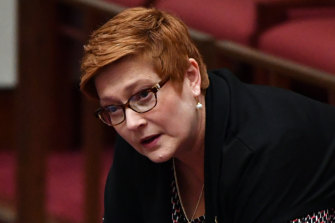 Foreign Minister Marise Payne has outlined the diplomatic principles that will guide her.Credit:AAP

Evans argues for a more activist approach to foreign policy where human rights advocacy is given greater prominence.

Bishop, as Australia's most recent former foreign minister, is more careful in her critique.

"I designed the 2017 foreign policy White paper to be a framework that would guide Australia’s foreign policy for at least a decade, during a time when there would be a more contested and competitive world," she said.

Foreign Minister Marise Payne on Thursday set out the principles she intends to follow as Australia's top diplomat. She said Australia would not simply "await our fate" in the great power contest playing out in south-east Asia.