London: Australia will stand firm on it's ban on Huawei from its broadband and 5G networks, even if President Donald Trump softens the US position on the Chinese telecommunications provider, Foreign Minister Marise Payne said.

Speaking to reporters at Australia House in London, before her meeting with the UK's Foreign Secretary Jeremy Hunt, Senator Payne said the Australian view on Huawei was clear. 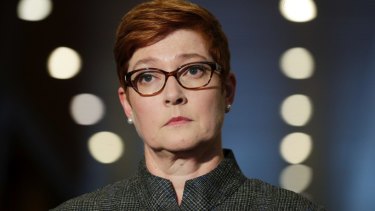 "Well we don't want anyone in our communications networks that have an obligation to another government," she said.

The British government has commissioned a review, due sometime between March and June, into whether the Chinese provider should be banned from the 5G network, but has sent signals that it is prepared to allow Huawei to continue supplying British networks.

Senator Payne said she would be happy to share with her British counterpart the intelligence that had persuaded Labor and the Coalition in Australia to support a ban.

"It's a decision we made in the context of protecting Australia's national security from using the strong advice of intelligence agencies on that matter," she said.

"The decision of other countries is a sovereign one for them but I am always happy to share with the appropriate counterparts that sort of information that's appropriate."

Australia has banned Huawei from building its National Broadband Network and the US has been pressuring the other countries in the Five Eyes intelligence sharing network to follow suit, insisting Huawei can act as a conduit to Beijing, something the company denies.

This has been undermined in recent days, however, with Mr Trump openly musing about potentially softening the US position by potentially involving the company's status in US-China trade talks before his meeting with China's Vice Premier Lie He in the Oval Office last week.

"We want everybody to compete… we'll be talking about it, we may or may not include that in this deal," he said.

Mr Trump also raised the possibility that charges against Meng Wanzhou, the daughter of Huawei's founder Ren Zhengfei could be also be dropped as part of the negotiations.

Ren Zhengfei claims the charges against his daughter are politically motivated and designed to give the US greater leverage going into the trade negotiations.

If the US were to wind back its position on Huawei, that would leave Australia stranded in enforcing a ban.

Senator Payne said that Australia's position would not change, even if it were left isolated in its position on Huawei.

"That's a hypothetical, but I have no reason to think that Australia would be changing our position," she said.