Berlin: Austria's chancellor called on Saturday for snap elections after the country's far-right vice-chancellor resigned over a secretly filmed video from 2017 that renewed questions about whether Russia had a direct line into a government at the heart of Europe.

The video showed Vice-Chancellor Heinz-Christian Strache of the far-right Freedom Party promising government contracts to a woman claiming to be the niece of a Russian oligarch. 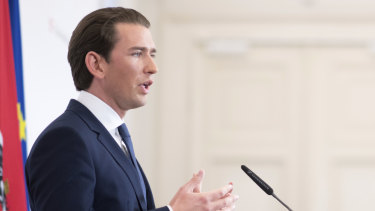 Austrian Chancellor Sebastian Kurz of the People’s Party has called for snap elections following the collapse of his coalition with the Freedom Party.Credit:AP

"After yesterday's video, enough is enough," Chancellor Sebastian Kurz told a room packed with reporters Saturday night in the capital, Vienna. He said he had asked Austria's president to hold a new election "as soon as possible."

The video was the worst in a series of missteps that ultimately brought down Austria's governing coalition. It raised anew concerns about whether the Freedom Party had been working to undermine liberal democracy and media freedoms in the country while it helped Kurz govern as the junior party in his coalition.

For weeks, opposition parties had called on Kurz to end his controversial coalition with the Freedom Party, with its well-documented links to far-right extremists and to Russia, which have increasingly worried allies at home and abroad.

The scandal comes at an important political moment in the European Union. Across the Continent, far-right, populist leaders are campaigning hard before this coming week's elections for the European Parliament and seem poised to increase their share in the chamber.

Many of Europe's populists share the intentions of President Vladimir Putin of Russia to widen political divisions and weaken Western institutions. Those tactics have involved interfering in democratic campaigns including the United States 2016 elections. And a Russian woman, Maria Butina, was sentenced to 18 months in prison last December after admitting that she had been part of that effort.

Not long ago, far-right parties were on the fringes of European politics. But like Austria's Freedom Party, several are now part of coalition governments. Some populist leaders, particularly in the Scandinavian countries and Poland, are wary of Russia. But others are outspoken in their desire for closer ties to the Kremlin.

Now Austria is at the centre of a battle of ideas between liberal Western democrats and populist forces allied with Putin, who as a KGB spy based in communist Germany would go to Austria to ski.

"Vienna plays a key role for Putin and for the far right," said Peter Pilz, an independent Austrian lawmaker. "Far-right parties all over Europe have become a sort of fifth column for Russia. In Austria, that fifth column has been in government." 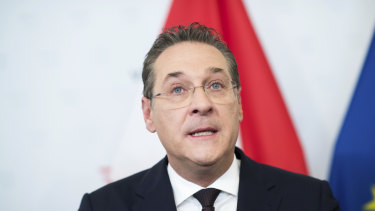 The Freedom Party has long-standing ties with Russia and a formal cooperation agreement with Putin's United Russia party. But without the Freedom Party, Kurz's conservative Austrian People's Party does not have a majority in parliament.

The video of Strache's meeting was filmed in a villa on the Spanish island of Ibiza three months before the 2017 Austrian elections in which Kurz led his party to victory. It exposed in a raw fashion Strache's apparent eagerness to help Russia with unethical promises for government contracts in exchange for donations to his party.

Apparently filmed without Strache's knowledge, the footage was obtained and published on Friday by the German newsmagazine Der Spiegel and the newspaper Süddeutsche Zeitung, two respected news outlets. The New York Times could not independently verify the contents of the entire video.

The motive and the timing of the recording's release remained unknown. Der Spiegel has would not say how it had obtained the video, but confirmed that it knew the identity of its source.

But what is clear from excerpts from the video is the Freedom Party's willingness to foster close links to Russia, even if in this case, the meeting may have been a setup.

The footage shows Strache and a Russian-speaking Freedom Party official smoking and drinking while talking to a woman who claims to be the niece of a Russian oligarch. When she offers to support the Freedom Party and to invest 250 million euros, around $280 million, in Austria, Strache offers her road-building contracts in the country in return.

After resigning as vice chancellor and leader of the Freedom Party on Saturday, Strache played down his comments as "typical alcohol-fueled macho behaviour" in an attempt to impress the "attractive hostess."

"I behaved boastfully like a teenager," he said at a news conference in Vienna on Saturday.

Strache first met Putin in May 2007. In 2014, at least two Freedom Party members took part as election observers during the Russian referendum after the annexation of Crimea.

Then in 2016, seven months before the meeting in Ibiza, Strache travelled to Moscow to sign a formal cooperation agreement between the Freedom Party and Putin's United Russia party. Last August, Austria's foreign minister, Karin Kneissl, who is backed by the Freedom Party, invited Putin to her wedding.

Kurz has said that the links between the Freedom Party and Russia were overstated.

"Regarding the close contacts between Russia and the Freedom Party, I can only smile," he said in an interview with The New York Times last month. "Every Western foreign minister has more contact with senior Russian officials in one year than the Freedom Party in its entire history."

Kurz won in 2017 by giving a youthful repackaging to much of the agenda of the Freedom Party, which he then invited into a coalition government.

At one point in the video, Strache compared journalists to prostitutes. He also said he would like Austria's news media landscape to resemble that of neighbouring Hungary, where Prime Minister Viktor Orban turned the media into a pro-government propaganda machine while allies have bought up swathes of the private media sector.

"We want to build a media landscape like Orban did," Strache says in the video, floating the idea of partly privatising Austria's public broadcaster and encouraging a suggestion by his Russian counterpart to take over Austria's most influential tabloid.

"If she takes over the Krone newspaper three weeks before election and brings us to spot number one, then we can talk about anything," Strache says.

Strache's dismissive comments about journalists and casual planning to undermine Austria's media freedom are seen as ominous. Last year, an internal memo circulated by the press chief of the Interior Ministry, which is controlled by the Freedom Party, instructed officials to shut out critical news media and reward those that provided favourable coverage with access.

Since then, the party has proposed replacing the broadcast fee that Austrians pay the public broadcaster directly with a tax-funded model that would give the government more control over the outlet.